If there's one thing most Americans can agree on, it's that 2016 was a pretty rocky year on the whole. But apparently, it's not just politics and violence that have us unusually stressed. According to a new Gallup poll, Americans worried more about their finances in 2016 than they did the previous year. Now that's a good reason to celebrate the year coming to a close. 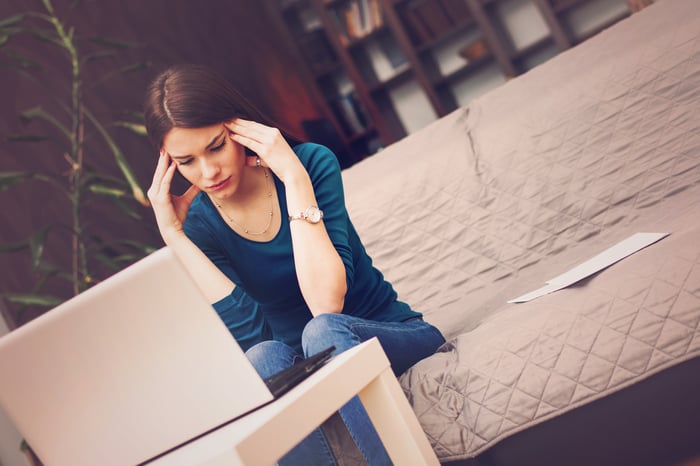 What are Americans worried about?

Not surprisingly, retirement tops the list of Americans' financial concerns. In 2016, 64% of Americans said they're worried about not having enough money to pay their living expenses in retirement, up from 60% the year before. Of course, these fears aren't exactly unfounded. An estimated 33% of Americans have no retirement savings whatsoever, and with Social Security replacing just 40% of the average worker's pre-retirement income, those who rely on their benefits alone might struggle financially during their senior years. In fact, in an Allianz study, 60% of baby boomers admitted they were more afraid of running out of money in retirement than actually dying. Now that's getting serious.

While retirement tops the list of Americans' financial fears, next in line is the inability to cover a medical emergency. A good 60% of Americans worry they wouldn't have the means to pay for an unexpected illness or injury, which is 5% more than last year. And once again, it's hardly a baseless concern. A recent GoBankingRates survey found that 69% of Americans have less than $1,000 in savings. Meanwhile, an earlier study by the Federal Reserve Board found that 47% of Americans are unable to cover a $400 emergency. Rather, they'd have to sell something or borrow the money to foot a bill of that size.

Not only that but 51% of Americans are worried they won't manage to maintain their current standard of living, while 41% stress about not having enough money to pay their normal monthly bills. Furthermore, 34% fear they'll be unable to keep up with their rent, mortgage payments, or other housing costs.

That last concern is a legitimate one, because according to a MacArthur Foundation report, between 2011 and 2014, 52% of American households had to make at least one major financial sacrifice to cover their rent or mortgage payments. These sacrifices including delaying retirement savings or racking up credit card debt to pay their expenses. Not only that, but in 2015, almost 12 million households spent more than 50% of their income on housing, which is downright excessive.

Unfortunate as it may be that countless Americans are lying awake at night worrying about their finances, there is a bit of good news to take away from all of this: You can take steps to address your concerns and improve your financial picture.

There's no question about it: If you don't save independently for retirement and rely on Social Security alone, there's a good chance you're going to come up short in your senior years. Even if you're currently living paycheck to paycheck, there are ways to eke out some savings that can add up over time. You can start by saving your entire raise each year and putting it into an IRA or 401(k). Furthermore, if you contribute enough to a 401(k) to take advantage of an employer match, you'll get free money out of the deal. Additionally, you might consider taking on an extra job to generate a bit more cash. Working even a few weekends a year could help you inch closer toward your savings goal.

If you're decades away from retirement, there's even better news: A little bit of savings can go a long way thanks to the beauty of compounding. Saving just $50 a month over the course of 30 years will give you $68,000 for retirement assuming your investment generate an average annual 8% return. Make it $100 a month and you'll be looking at a respectable $136,000 by the time retirement rolls around.

Americans' second-biggest fear is not having enough money for a medical emergency. But it's not just health-related issues that might creep up. Your car might break down, or your roof might spring a leak. That's why it's crucial to build an emergency fund with three to six months' worth of living expenses. If the amount in your bank account isn't anywhere close, start cutting back on whatever luxuries you can to catch up to where you need to be. In fact, funding your emergency savings is even more critical than saving for retirement, so make sure it takes priority over everything else.

Live below your means

Part of the reason so many Americans worry about keeping up with their regular bills is that they have a tendency to spend every penny they earn. A better approach is to consistently live below your means, especially when it comes to major expenses like housing and transportation. Generally speaking, your housing costs should never exceed 30% of your take-home pay, and if you can keep them even lower, you'll have more wiggle room in your budget for other expenses that might arise. Similarly, if you have the option to ditch your car in favor of public transportation, do it. AAA reports that it costs $8,700 a year on average to own and maintain a vehicle. If you can get by without your own set of wheels, you'll be freeing up money to save or spend elsewhere as needed.

Though it's easy to see why so many Americans fall victim to financial anxiety, you don't have to take your fears lying down. If you commit to growing your retirement savings, building your emergency fund, and keeping your living costs low, you'll be setting the stage for a much less stressful 2017.