With only a few weeks gone by in the new year, most of us aren't particularly inclined to think about taxes yet. But the financial moves you make throughout the year might impact your taxes in different ways. With that in mind, here are a few critical mistakes that could end up being costlier than you might imagine. 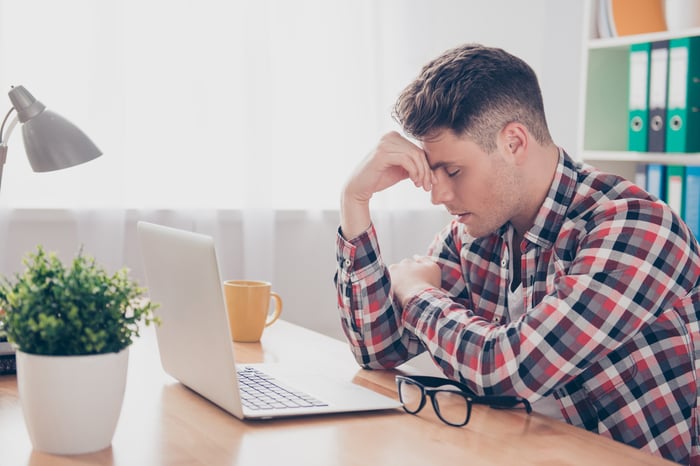 While Roth 401(k)s and IRAs don't offer an up-front tax break for contributions, traditional IRAs and 401(k)s are a different story. The money you contribute to a traditional IRA or 401(k) goes in on a pre-tax basis, which means you get to lower your taxes the year you contribute. While you still have most of 2017 to put money into either type of plan, most people find it easiest to fund their accounts in relatively equal increments month after month. If you've yet to set aside money in your paycheck this year for retirement, now is the time to step up.

2. Not paying attention to capital gains

Making money from an investment is a good thing, except for the fact that selling investments at a profit automatically increases your tax burden. The extent to which you'll be taxed on your investment gains will depend on how long you held the investments in question. Short-term gains, which are those that apply to investments held for one year or less, are taxed as ordinary income. This means that if you sell off an investment after seven months at a $4,000 profit and typically lose 25% of each paycheck to taxes, you'll owe $1,000 of that profit to the IRS.

Long-term gains, however, are taxed more favorably than short-term gains. Long-term capital gains apply to investments held for at least a year and a day.

Here's what your long-term capital gains tax rate currently looks like based on your existing tax bracket:

Now keep in mind that the numbers on the left might change if President Trump's tax proposals go through. But even if that does happen, your takeaway here is that selling investments too quickly can create an unfavorable tax situation, so it's critical that you pay attention to how long you've held your investments before selling them. Case in point: In our example above, you'd lose just $600 to taxes on a $4,000 gain (as opposed to $1,000) if you wait a year and a day to sell your investment.

3. Waiting until the last minute to file your taxes

Procrastination is the name of the game for many tax filers, but waiting until the last minute to prepare your return could spell trouble. For one thing, the more rushed you are with the process, the more likely you are to make a mistake that could land you on the dreaded IRS audit list. Furthermore, if you're due a refund, filing early could put that cash back in your pocket sooner -- though you should be aware that if you're claiming the Earned Income Tax Credit or Additional Child Credit, you won't get your refund until after Feb. 15 this year, no matter what.

On the other hand, you may come to find that you owe the IRS money, and if you wait until the last minute to figure that out, you'll have little opportunity to scrounge up the cash if you don't already have it sitting in a savings account. And if you think you can worm your way out of that mess by filing a tax extension, think again. While a tax extension will give you six extra months to submit your return, it won't give you extra time to pay your tax bill. And if you fail to pay your bill in full by the April 18, 2017 deadline, you'll face a penalty of 0.5% of the amount you owe per month until you pay that balance in full, up to a maximum of 25%.

While you may not be inclined to think about taxes prior to April, the decisions you make those other 11 months of the year could affect your taxes for better or worse. Steering clear of these three mistakes can help you avoid losing money to poor planning and decision-making.