It's hard to argue the fact that women face certain challenges when it comes to investing, the greatest of which is the ever-present wage gap. Women earn 5% less on average than men who are in the same positions -- and in some professions, they earn up to 28% less than their male counterparts. Throw in the fact that women are more likely than men to take a break from the workforce (typically to care for children or other family members), and it's no wonder so many women struggle to keep up with men financially.

But despite these challenges, women do a remarkably good job at investing -- so much so that they could actually teach men a thing or two. Here are a few key lessons men can learn. 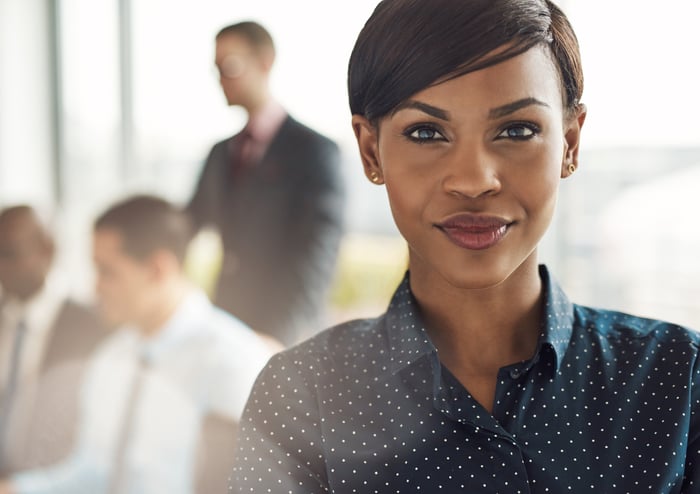 Employer-sponsored 401(k) plans offer a number of benefits, such as pre-tax contributions, tax-deferred growth on investments, and free money in the form of the employer match. (An estimated 92% of companies offer some type of matching incentive.) And when it comes to participation rates, women have men beat. According to Vanguard, 73% of women contribute to an employer-sponsored plan, versus just 66% of men, and the discrepancy widens as earnings rise. In 2014, 81% of women earning $50,000 to $75,000 a year participated in a 401(k) versus 62% of men with similar incomes. And among those earning $75,000 to $100,000, 86% of women contributed to a 401(k) versus just 70% of men.

2. Live below your means and invest the rest

Despite the fact that women typically earn less than men, they manage to save at higher rates. In fact, women sock away 7% to 16% more of their income than men on a whole, but that savings gap expands at specific income levels. For example, women with incomes between $30,000 and $49,999 have average account balances that are a good 20% higher than those of their male counterparts, and their median account balances are 40% higher. Living below your means is a good way to ensure that you'll have money left over for savings no matter how much you earn -- and it's a rule women are clearly taking to heart.

3. Always do your research

There's a reason 43% of women feel they haven't made any financial mistakes, whereas only 33% of men can say the same. Fidelity reports that women are more likely than men to ask questions and do their research when choosing investments. Furthermore, women tend to have more balanced portfolios than men, which helps safeguard them against losses during periods of market volatility.

But women aren't just playing it safe. They're making smart choices, which is why they typically achieve the same return or better than men while taking on less risk.

4. Find investments you can buy and hold

Patience is often the key to investing successfully. Picking the right investments can help you generate steady income (think dividends) while growing your portfolio's value. But men are less likely to hold investments for the long haul and more apt to engage in risky behavior such as trading frequently in an effort to time the market -- an approach that can backfire in more ways than one.

Short-sighted investors get burned when the market takes a dive. By trading less often than men, women are less likely to buy or sell at the wrong time and lose money as a result. Furthermore, the more trading you do, the more fees you'll rack up. According to Vanguard, in 2014, 11% of men exchanged mutual funds in their accounts, compared with 7% of women. And that's not a new trend: Additional data shows that between 1991 and 1997, men were involved in 45% more trading activity than women, and as such, they reduced their net returns by 2.65 percentage points per year, compared to just 1.72 percentage points for women.

5. When in doubt, ask for help

There may be some truth to that age-old joke about men refusing to ask for directions. According to Fidelity, women are more likely to seek professional financial advice than men, which can be instrumental in developing a smart investment strategy. Specifically, 42% of women have professionally managed retirement accounts, compared to just 36% of men. And while it should be noted that advisors charge a fee for their services, the value and returns they provide will often more than make up for it.

While women clearly have a lot going for them as investors, many will inevitably face challenges as they get older -- especially since females tend to outlive males and will therefore need access to more income in their senior years. An estimated 90% of women will have to manage their finances on their own at some point in life, so their best bet is to plan for a longer retirement and get educated about the costs involved.

Furthermore, though women do a good job of maintaining balanced portfolios, some might need to invest more aggressively in their younger years to compensate for their lower earnings. Finally, women who break from the workforce to raise families should consider working a few extra years at the tail end of their careers. This will allow them to sock away extra cash, stretch their retirement savings, and boost their Social Security benefits, all of which can make a world of a difference later in life.