Not everyone gets a refund during tax season. Here's what I did when I found out I owed the IRS money.

It's estimated that nearly eight in ten tax filers end up with a refund. Unfortunately, I wasn't one of them this year. Quite the contrary -- my tax bill was so high I almost fell over in my chair when my accountant called to walk through the numbers.

Once I got over the shock, I realized I needed to come up with a plan for paying off that balance by the April 18 tax filing deadline. Though the IRS does offer payment plans for innocent tax filers like me (who make the mistake of underestimating not only their quarterly payments because I'm self-employed, but the extent to which the alternative minimum tax can rear its ugly head), it also charges interest on unpaid taxes to the tune of 0.5% per month up to a maximum of 25%. 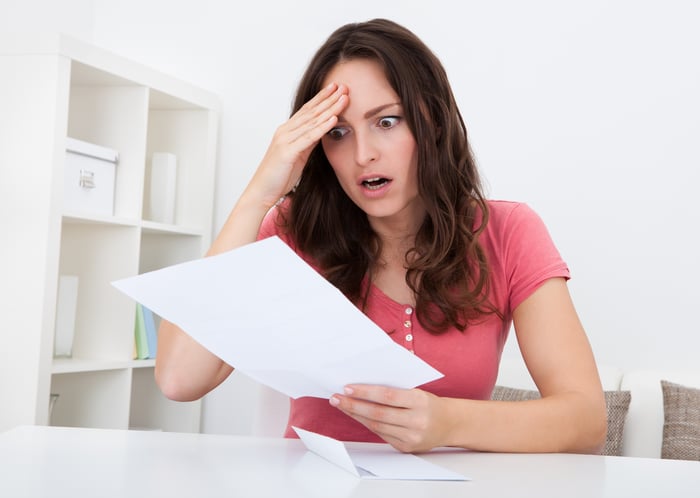 No, that's not me, but she pretty much sums things up. Image source: Getty Images.

Not wanting to dig myself into an even deeper hole, I decided I'd do what it takes to knock out that balance in full. Here's how I pulled it off.

The good thing about IRAs is that you have up until the tax filing deadline to fund an account for the previous year. Now with a traditional IRA, you can only contribute up to $5,500 per year if you're under 50, which means that if you're looking to shave a few thousand dollars off your tax bill, that probably won't do the trick (though it will help).

I needed to wipe out more tax debt than that, but thankfully, as a self-employed writer, I was eligible to open a SEP IRA. SEP IRAs come with much higher annual contribution limits than traditional IRAs. Currently, you can contribute up to 25% of your earnings for a maximum of $54,000. Though I'm not eligible to put in nearly that much, I was able to contribute much more than a traditional IRA would've allowed for, and as a result, my tax bill dropped several thousand dollars. And while I had originally planned to put that money to different use, I can now rest easy knowing I've done my part to save for retirement this year.

Over the past number of years, my husband and I somehow managed to accumulate quite a bit of stuff -- stuff we've been meaning to get rid of for quite some time. Seeing that tax bill was motivation enough to get moving. We immediately listed some of those items (gently used furniture, slightly dated electronics) and got a few hundred bucks without having to so much as leave the house.

Now I will say that as a self-employed individual who only gets paid when she works, I wasn't willing to sink time into photographing and listing items that would only sell for $10 to $20 a pop. But if you're in a similar situation and have things that might sell for $100 or more, it's probably worth your while. You may even wind up with a cleaner basement to boot.

Being able to take on extra work as needed is both a blessing and a curse. On one hand, it often means plugging away at my desk till all hours of the night when I'd rather be doing other things, like sleeping. On the other hand, it comes in extremely handy when I find myself in situations where I quickly need to generate more money. Once I found out how much taxes I owed, I immediately got working to make up the difference.

Now I realize not everyone has the ability to pick up more work overnight, but if you're staring down a huge tax bill you can't pay, you may want to get creative. See if local businesses need weekend help, moonlight as an after-hours consultant in your current field, or sign up to babysit, walk dogs, or mow lawns. You'd be amazed at the number of tasks people are willing to outsource, and while it's no fun spending every waking hour working, it is a good way to tackle unexpected tax debt.

Learning from my mistake

Though my tax situation wasn't ideal, I'm thankful I had options for paying off my bill quickly. That said, I definitely don't want a repeat come this time next year, and so I'm taking steps to avoid a similar situation by doing the following:

If you're among the minority of taxpayers who owe the IRS money this year, don't panic. You may have more options for slashing or paying off that bill than you'd think, and if you can't knock it all out at once, you can always ask to get on an IRS payment plan. It won't get you out of paying interest on your remaining balance, but it could save you a world of stress and aggravation.