Retirement might throw you for a financial loop if you aren't prepared. Here are some of the costs you might face as a senior and why many people won't have enough income to cover them.

Countless hard-working Americans look forward to retirement and the flexible, hassle-free lifestyle it often affords. But many people fail to realize that by retiring prematurely, they're essentially swapping work-related stress for financial stress.

It's not a secret that on the whole, Americans are woefully unprepared for retirement. The latest data from the Employee Benefit Research Institute reveals that 25% of workers have less than $1,000 set aside for retirement, while almost half of workers have less than $25,000 socked away. But what's even more telling is how little near-retirees have saved. According to the Economic Policy Institute, the average household aged 56-61 has $163,577 in a retirement account. And while that might seem like a respectable sum, it's actually not a whole lot of money in the grand scheme of what retirement might cost. 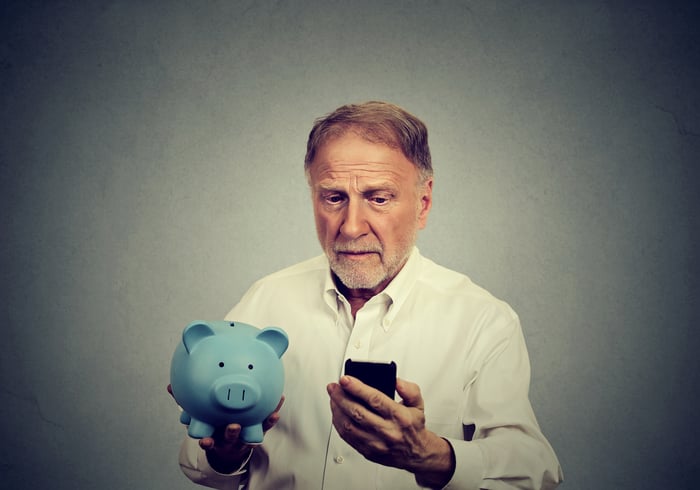 Now let's factor in Social Security. The average current recipient gets $1,360 a month in benefits, so when we combine that with $545 from independent savings, we're looking at a total of $1,905 per month, or $22,860 per year, of income. But given the number of costs that are just plain inevitable for seniors, that actually isn't close to being enough.

Healthcare will cost you big time

Waiting until age 65 to retire can help on the healthcare front, since at that point you'll be eligible for Medicare. But even with Medicare coverage, you could still be looking at a host of health-related expenses, especially considering that traditional Medicare doesn't cover services like dental or vision care.

HealthView Services, which supplies cost-projection software, estimated last year that the average healthy 65-year-old couple could expect to spend $377,000 on medical care throughout retirement. If we divide that figure in half and then spread it out over a 25-year time frame, we'll see that the typical individual retiree is looking at $7,540 a year, or $628 a month, in medical expenditures.

That figure, of course, assumes that you're reasonably healthy. If you have a known medical condition or develop one early on in retirement, you can expect your costs to climb.

Though many older workers manage to enter retirement mortgage-free, a large number fail to account for the cost of living in their homes. The average American homeowner pays $2,127 per year in property taxes, while the typical homeowners' insurance policy costs $952 annually.

Then there's maintenance, which usually amounts to 1% to 4% of your property's value. Zillow reports that the median home value in the U.S. is $196,500, so if we split the 1% to 4% range straight down the middle, we're looking at $4,912 a year, or $409 per month, on upkeep alone. (Keep in mind, however, that many retirees have older homes and therefore spend even more on maintenance and repairs.) Throw in the $256 the typical American will spend on property taxes and insurance and you're looking at $665 a month on housing right off that bat.

Of course, that figure assumes you don't have a mortgage payment to contend with. Since a good 30% of homeowners 65 and older still carry mortgage debt, it's not necessarily the most reasonable assumption.

Your other needs won't go away

Just because you won't be commuting to an office on a daily basis in retirement doesn't mean you won't need some mode of transportation. Similarly, once you retire, you'll still need food, clothing, phone service, gas, electricity, and whatever other basic expenses you currently face that aren't work-related. If we add up the $628 a month the average individual retiree will spend on healthcare and the $665 estimate for housing, we arrive at $1,293. Working backward from the $1,905 in savings and Social Security income the typical retiree gets, that leaves you with just $612 a month to cover all of your remaining expenses -- which makes a pretty strong case for postponing retirement if your savings are currently lacking.

If you're nearing retirement with inadequate savings, there are still opportunities to change your fate. You can start by working a few extra years and hitting the annual limits on your IRA or 401(k) contributions, which, for those 50 and over, are $6,500 and $24,000, respectively. Maxing out a 401(k) for two years would leave you with an extra $48,000, which translates into an additional $160 a month of income over a 25-year retirement.

Working longer can help boost your Social Security payments too. If you hold off on claiming benefits past your full retirement age (which, for today's workers, is 66, 67, or somewhere in between), you'll get an automatic 8% increase per year up until age 70. If you'd normally be eligible for $1,360 a month in Social Security at your full retirement age of 66, and you decide to delay your benefits for two years, you'll bump those monthly payments up to $1,577.

While working longer may not be the ideal solution to your lack of savings, it's a guaranteed way to improve your financial outlook. Retirement isn't the low-cost existence many people assume it will be, and if you aren't willing to compromise now, you could find yourself dangerously cash-strapped at a time in your life when you're at your most vulnerable.