For years, workers have been warned to save independently for retirement rather than rely on Social Security alone to pay the bills. While Social Security should replace a good 40% of your pre-retirement income, most people need at least 70% to 80% of their former earnings to stay afloat financially once they stop working. And new data from the Employee Benefit Research Institute tells us that in the early years of retirement, nearly 50% of households wind up spending more money, not less, than they did during their working years.

If your goal is to sustain a comfortable lifestyle in retirement, then you'll need to make a solid effort to save as much money as you can, as early as you can. But if you don't invest your savings wisely, you'll risk coming up short. 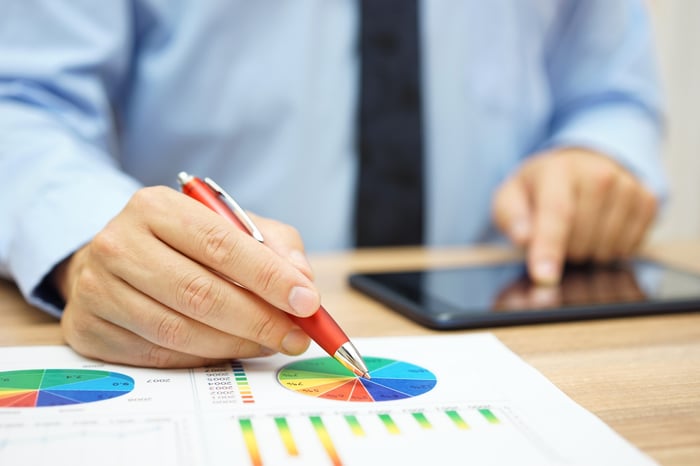 Getting aggressive pays off

The beauty of tax-deferred retirement accounts such as IRAs and 401(k)s is the ability to grow your savings without having to pay taxes on your investment gains year after year. This allows you to reinvest those gains in full and take full advantage of compounding. The problem, however, is that most Americans are saving too conservatively for retirement and limiting their investments' growth in the process.

According to a 2016 Wells Fargo study, 60% of savers in their 30s, 40s, and 50s are so focused on minimizing losses that they're not capitalizing on growth opportunities. Or, to put it another way, more people than not are shying away from stocks at a time in their lives when that added growth could have a huge long-term impact.

Of course, the risky nature of stocks has long been a considerable barrier to entry for otherwise cautious investors. And it makes sense. Stocks are among the most volatile investments out there, and if you're the risk-averse type, you're probably inclined to put your money elsewhere. But there's an upside to taking on the risk of stock investments, and it's the higher returns they're known to deliver. In fact, if you load up your portfolio with stocks, you might easily see double the return a bond-focused strategy would give you. And that could spell the difference between a comfortable retirement and one that's wrought with financial stress.

To illustrate this point further, take a look at the following table, which outlines the type of return your investment style is likely to yield and its impact on your ultimate savings balance:

If you commit to saving $500 a month during your career and adopt an aggressive investment strategy, you stand to accumulate $680,000 in time for retirement -- a more than respectable nest egg. But if you limit yourself to conservative investments, you might end up with less than half that amount. And that forgone $344,000 is money you'll no doubt come to miss once you're retired and heavily reliant on savings to pay the bills.

Nobody wants to work hard and make sacrifices to save money only to lose a chunk of it in the stock market. But if you're willing to adopt a long-term investment strategy, which should be the case when saving for retirement, then you stand a strong chance of coming out ahead.

Consider this: Between 1965 and 2015, the S&P 500 underwent 27 corrections of 10% or more, but it ultimately recovered from each and every one. Now if patience isn't your most promising virtue, and you're the type who's inclined to act impulsively and pull out your investments the second they start to dip in value, then yes, you might lose out in the stock market. But if history tells us anything, it's that those who commit to sticking things out for the long-haul wind up making money -- sometimes lots of money -- from stocks.

If the idea of investing in individual stocks sounds daunting, then there's always the option to buy shares of an index fund. Index funds are a simple, low-cost alternative for getting a piece of the stock market action, and they offer the benefit of instant diversification. Both the Vanguard S&P 500 ETF (NYSEMKT:VOO) and the Vanguard Total Stock Market ETF (NYSEMKT:VTI) offer decent stock exposure for newbies.

It's easy enough to adopt a conservative investment strategy and resign yourself to limited growth, but that's a move that can really hurt you in the long run. While investing in stocks might push you outside your comfort zone, when you think about it, the alternative -- not having enough money in retirement -- is actually a far more frightening prospect.

This Mistake Could Cost You $344,000 in Retirement Income @themotleyfool #stocks $VOO $VTI Next Article
Current