Please ensure Javascript is enabled for purposes of website accessibility
Log In Help Join The Motley Fool
Free Article Join Over 1 Million Premium Members And Get More In-Depth Stock Guidance and Research
By Maurie Backman - May 19, 2017 at 11:24AM

Laddering your CDs can help you generate a stream of interest income while freeing up your cash at regular intervals. Here's how this strategy works.

Though there's typically no such thing as a risk-free investment, sticking your money in the bank is a pretty good way to guarantee that you won't lose out on principal over time. That's because the FDIC insures bank deposits for up to $250,000 per account holder, which means that a couple with a joint account can stash $500,000 in the bank without having to worry about losing a dime.

Of course, the downside to storing your money in the bank is that you'll be significantly limited in its growth. While stocks, for example, might deliver an average annual 7% return on investment (and that's a relatively conservative estimate), these days, you'll be lucky to get 1% out of a savings account. That said, if you're really intent on a risk-free investment and want a slightly better return than what a savings account might offer, you have the option to put your money into a certificate of deposit. 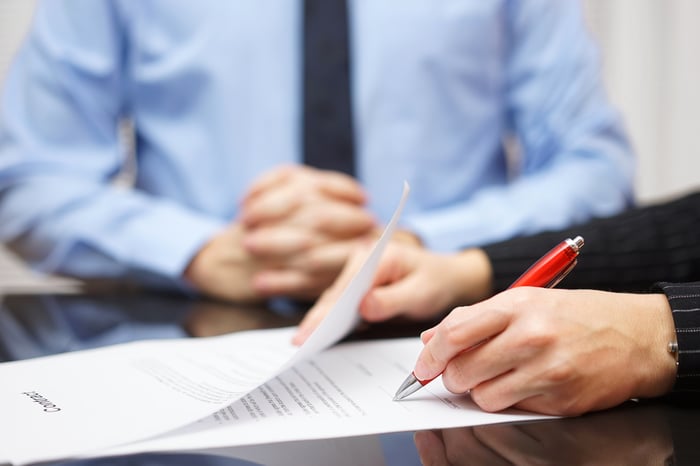 A certificate of deposit, or CD, is similar to a savings account, only more restrictive. When you open a CD, you're basically agreeing to lock your money away for a preset period of time in exchange for a higher interest rate than what you'd get from a standard savings account. Because CDs offer less access to your money, a good strategy is to build what's known as a CD ladder. This way, you'll have more options for reinvesting your cash should you get tired of the relatively low interest rates CDs offer.

Why choose a CD?

The major benefit of CDs is the ability to earn some, but not a lot, of interest on your money without having to worry about losing a portion of your principal. The downside, however, is that CDs offer much less liquidity than standard savings accounts, and while you can technically withdraw your money early, you'll be penalized for doing so -- typically to the tune of six months' worth of interest.

Though you can choose the specific length of your CD, shorter-term CDs offer lower interest rates than long-term CDS (such as those that are three to five years in length). In fact, in some cases, a short-term CD might offer a lower rate than a traditional savings account.

The risks of CDs

As long as you don't deposit more than $250,000 ($500,000 if you're a couple) into a CD at a single bank, you won't risk losing out on any principal. But there's another risk you'll face: liquidity and interest rate risk.

When you lock your money away at a fixed rate, you're assuming that a better rate won't become available during the period in which your cash is unavailable. But what happens if, say, you put your money in a three-year CD at a certain rate, and then eight months later, rates increase? You'll be stuck with a lower rate for the foreseeable future. In this regard, CDs and long-term bonds are quite similar. Though both are relatively safe, they both limit the amount of growth your money might achieve.

A better approach to CDs

Laddering your CDs offers two benefits. First, it limits your interest rate risk by offering regular opportunities to reinvest your cash. Secondly, it reduces your liquidity risk by giving you consistent access to your money.

You can use the following calculator to see how this strategy might work in practice:

Keep in mind that you'll need to input your marginal tax bracket, which is the rate you pay on your highest dollars of earnings. Because interest income is taxed as ordinary income, you can expect to lose a portion of your profits to your good pals at the IRS. In fact, in the grand scheme of investments, CDs actually aren't all that tax-friendly. Dividends, for example, are taxed at a more favorable rate than interest, so if you put your money into dividend-paying stocks, you won't face the same tax implications.

While laddering your CDs is a good way to keep your principal safe while ensuring intermittent access to your cash, you should still think twice before locking your money away in the bank. Even in a best-case scenario, CDs only offer limited growth, and if you're saving for the future with CDs, you risk coming up short at the end of the day.