Please ensure Javascript is enabled for purposes of website accessibility
Log In Help Join The Motley Fool
Free Article Join Over 1 Million Premium Members And Get More In-Depth Stock Guidance and Research
By Maurie Backman - May 27, 2017 at 7:23AM

If you're not careful, being a wedding guest could have dire financial consequences.

With wedding season working its way into full gear, countless Americans will soon face a series of uncomfortable conundrums. Attend weddings they can't afford to be present for? Or risk hurting others' feelings by saying no?

There's no question that declining a wedding invitation is easier said than done, but given the cost of being a guest, some folks might feel they have no choice but to pass. A recent American Express study found that it costs an average of $673 to attend a wedding -- but that number doesn't include an actual gift. Throw in the obligatory present, and you may be looking at well over $800 each time you indicate "yes" on your RSVP. The cost of being a wedding guest has gotten so out of hand that in a study by ConsumerCredit.com, more than 50% of Americans said they've struggled to afford the expense. 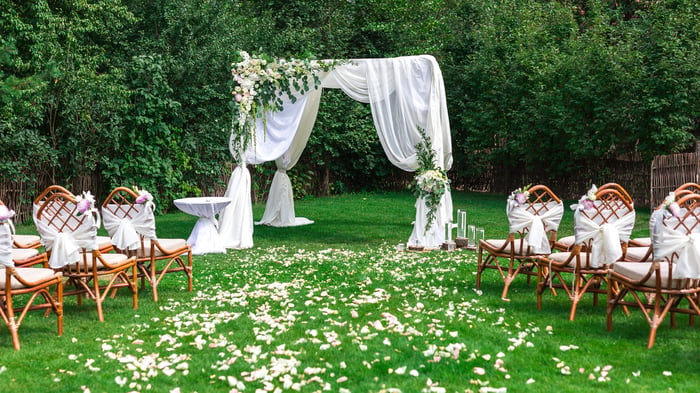 If you're looking at a host of wedding invites this spring and summer, let this be your warning: If you don't plan ahead, and you don't have the heart to decline, you could end up putting your own finances on the line.

What will that wedding really cost you?

It's one thing to forgo certain luxuries in order to attend a wedding, but it's another to take on debt each time you accept an invite. Unfortunately, a large number of Americans will encounter the latter this season.

On top of being expensive, part of the problem with attending weddings is that at least one-third of the population doesn't budget for them. But if you don't plan for the cost of attendance in advance, you'll inevitably wind up in a situation where you have several weddings clustered within the same three-month period, and you're short on funds to pay for them. And if saying no isn't an option, you'll have no choice but to charge your travel costs (and possibly even your gifts), thus kick-starting what could be a vicious cycle of credit card debt.

Imagine you're invited to three weddings this season, at $800 a pop. If you charge their collective $2,400 cost of attendance on a credit card with 20% interest, and it takes you a solid two years to pay off that debt, you'll wind up spending roughly $530 extra. Or, to put it another way, you'll wind up adding over $175 to the cost of each individual affair. Given the number of people who don't have much financial wiggle room in their lives, throwing out $530 on a series of obligations only adds insult to injury.

Plan for those weddings in advance

If you're anticipating a series of weddings this year, a better approach is to start putting money aside for them as soon as you receive those save-the-date cards. Say you're given six months' notice about two weddings. If you know you'll end up spending a good $1,600 in total to attend, you should aim to save about $266 a month during that six-month period. This way, you won't have to take on debt when those costs come due.

Now if you're already living paycheck to paycheck, saving that money might pose a challenge, but a few small changes might work to free up that needed cash. First, examine your budget and shave off two or three non-essential expenses each week, like that Saturday-night cab ride you treat yourself to, or your standing weekly takeout order. If you eliminate two $20 expenses every week, that's $160 a month right off the bat.

Next, explore your options for finding part-time work that won't interfere too heavily with your schedule. You might pick up a weekend shift at a local restaurant, or revisit your teenage roots and try babysitting. If you're willing to work, say, one weekend a month, or one or two nights a week, you can easily come up with another $100 or more. Throw in the $160 you just saved by cutting expenses, and you'll have the means to afford those weddings without having to make major lifestyle changes in the process.

Of course, another option is to take the extra money you receive throughout the year -- say, your tax refund or bonus -- and stash it in a savings account earmarked for weddings. Or, you could do what many folks inevitably do when they just can't afford to attend weddings -- say no, send a thoughtful gift, and save yourself many hundreds of dollars in the process. Sure, you'll miss out on those cocktail franks and photo ops with your longtime friends, but you'll survive wedding season with your finances intact.