Please ensure Javascript is enabled for purposes of website accessibility
Log In Help Join The Motley Fool
Free Article Join Over 1 Million Premium Members And Get More In-Depth Stock Guidance and Research
By Maurie Backman – May 28, 2017 at 8:34PM

A few smart decisions now can help you avoid debt during your golden years.

America is a nation of borrowers, and while racking up debt can be dangerous at any age, it's especially hazardous for those heading into retirement. Because most seniors are behind on savings to begin with, carrying debt into retirement will only strain their already limited budget. Yet a growing number of households are kicking off their golden years with piles of debt -- in fact, 20% of borrowers actually expect to die in debt.

According to the Consumer Financial Protection Bureau, 30% of homeowners aged 65 and older still carry mortgage debt -- granted, housing debt is technically the "good" kind to have. However, credit card debt can be particularly detrimental for seniors, and ValuePenguin reports that Americans 65 and older have average credit card balances of $6,351. 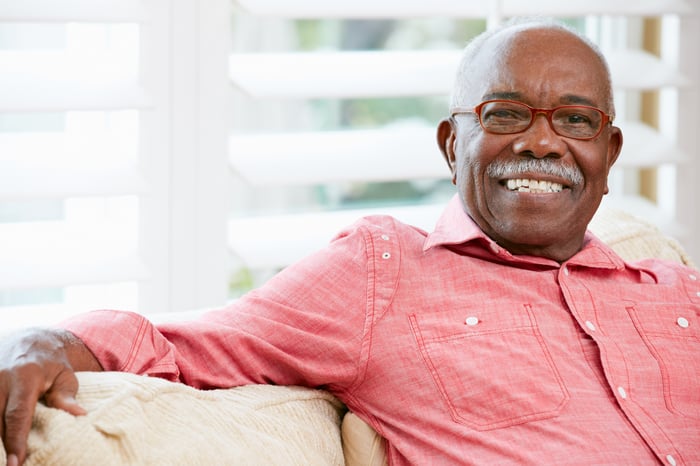 While the picture of retiree debt isn't pretty, the good news is that you can take steps to rid yourself of your nagging obligations in time for retirement. Here's how.

1. Build up a chunk of emergency savings

Having a healthy amount of savings can help you avoid all sorts of debt in the first place. Unfortunately, 34% of Americans admit to having no money in the bank at all, while 69% have less than $1,000 in available cash. But if you build an emergency fund with a minimum of three to six months' worth of living expenses, you'll have savings available if you encounter an illness, layoff, or series of unexpected bills. Those who don't have emergency savings often end up relying heavily on credit cards to get through hard times, so avoiding that sort of scenario can help you stay out of debt from the start.

2. Live below your means

Part of the reason so many people live paycheck-to-paycheck is that they take on expenses they can't easily afford. Tempting as it may be to go on those luxury vacations or drive the nicest car, if you make a point to avoid maxing out your disposable income, you'll be less likely to encounter a debt situation during your working years.

A good way to ensure that you don't overspend is to create a budget that only accounts for a portion of your income. If, for example, you bring home $5,000 a month, then pretend at least $500 of that doesn't exist. Better yet, set up an automatic savings plan so that money never even hits your checking account. This way, you'll be less tempted to use it. Another option, if you're a dual-income household, is to base your budget on one salary only. If you can swing it, you'll have tons of protection against unplanned expenses, which will help you stay out of debt.

3. Knock out your student loans early on

The average college graduate aged 20 to 30 with student loans currently pays over $350 a month for that debt. Collectively, Americans owe a whopping $1.4 trillion in student loans, much of which stems from private lenders known for charging an arm and a leg for the privilege of borrowing. If you're serious about retiring debt-free, one of the best moves you can make is to eliminate your student debt as quickly as possible -- namely, by making extra payments toward your loan until it becomes a thing of the past. Freeing up the amount you spend each month on student loans will give you more flexibility to pay your other bills, thus helping you avoid credit card debt -- the worst possible kind.

4. Get an affordable mortgage

Housing tends to be the typical working American's greatest monthly expense. But if you keep your mortgage costs to a minimum, you'll have an easier time paying off your home by the time retirement rolls around. And if you keep your mortgage payments low enough, could make some extra ones along the way, thus shortening the life of your loan and cutting your long-term interest costs. As a general rule, your housing costs -- including your mortgage, property taxes, and insurance -- should not exceed 30% of your take-home pay. But the lower you can keep that percentage, the better your odds of paying off your home during your working years.

To keep your mortgage as affordable as possible, start by applying only once your credit score is high enough to secure a decent rate. Based on today's rates, a $200,000 mortgage, for example, might cost you close to $200 more per month if your credit is "fair" as opposed to "excellent." Your mortgage will also cost you a lot less if you manage to put down 20% of your home's purchase price. Otherwise, you'll face PMI, which will get tacked onto your monthly payment as an added premium.

5. Stay away from credit card debt

Credit card debt is one of the toughest forms of debt to shake, primarily because most cards not only come with high interest rates, but also compound that interest daily to make sure you end up paying as much of it as possible. Avoiding that debt from the get-go can ensure that you won't end up carrying it with you into retirement. This isn't to say that you shouldn't use a credit card at all; rather, you should make it a policy to only charge what you can afford to pay off by month's end. If you never accumulate an outstanding balance, you'll never kick-start that vicious interest cycle.

Once you're retired and living on a fixed income, each individual dollar you have will count even more. The less debt you have going into retirement, the less financial stress you'll have to deal with during your golden years.