Please ensure Javascript is enabled for purposes of website accessibility
Log In Help Join The Motley Fool
Free Article Join Over 1 Million Premium Members And Get More In-Depth Stock Guidance and Research
By Maurie Backman – May 28, 2017 at 8:42AM

More and more Americans are struggling to make their loan payments -- and it's a real problem.

Though you'd think the bubble would've burst by now, college costs are still on the rise, and as a result, student debt is at an all-time high. Among 2016 graduates who took on student loans, the average student debt load is more than $37,000, up 6% from the previous year. All told, more than 44 million Americans carry student debt to the collective tune of $1.4 trillion.

The problem has gotten so bad, in fact, that many graduates are resorting to drastic measures to address their crippling debt. Specifically, they're not paying it. A new report from progressive think tank Demos found that almost 40% of student loan borrowers are either in default or more than 90 days late on their payments. What's even more disturbing, however, is that those owing less than $10,000 in loans have virtually the same default rate as those who owe more than $100,000. 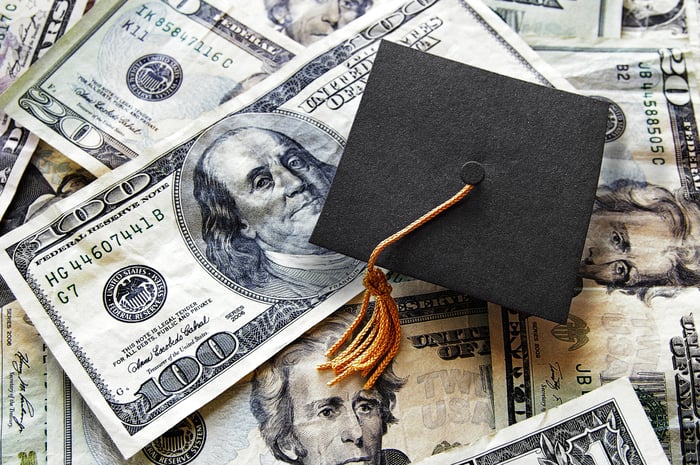 A big reason so many graduates run into trouble with student debt is that they borrow from private lenders, which are notorious for charging higher interest rates and offering fewer options for repayment. Whereas federal loans come with certain protections, such as income-based repayment plans and the option to defer payments under certain circumstances, private lenders tend to be far less flexible.

Yet federal borrowers are struggling to keep up with their payments as well. As of 2015, the federal default rate hovered around 11.3%, with roughly 593,000 former students out of 5.2 million falling delinquent on their outstanding debt.

If you're among the many recent graduates who are leaving college with a pile of debt, you should know that defaulting on your loans could have serious consequences -- so you'd better be prepared to pay up.

The dangers of defaulting on student debt

Many graduates have no choice but to skip loan payments from time to time, or even on the regular, but what you may not realize is that defaulting on your student debt can have a serious impact on your credit score. Your credit history, which speaks to your bill-paying habits, is the single most important factor in establishing your credit score, so if you skip payments or are consistently late in making them, your score is guaranteed to get dinged. And if you're a recent grad with a limited credit history to begin with, that could spell long-term trouble, especially since a student loan default will stay on your record for seven years.

Having bad credit can impact your ability to rent an apartment, secure an auto loan, or even get a job, so disregarding your loan payments, even if out of necessity, is something you just plain don't want to do. Furthermore, if you fail to make your student loan payments as scheduled, you could end up getting sued. And if you don't make good on your federal loans, the government might come after those payments by garnishing your wages or withholding your tax refunds.

Now if you think you can evade those loans by filing for bankruptcy, think again. That so-called "clean slate" doesn't apply to student debt, so you can't get out of it that way.

On the other hand, if you have federal loans, you may be eligible to alter the terms of your repayment plan, or postpone your payments under certain circumstances, in order to avoid a default. In fact, a growing number of borrowers today are using federal income-based repayment plans. As of late 2013, there were about 4.6 million borrowers enrolled in such programs.

Get a handle on that debt

Staying current on your student loan payments is one of the best things you can do for your credit, so if you're a recent graduate, be sure to review your repayment plan so that you understand exactly what's expected of you. You can check out this comprehensive summary courtesy of my colleague, Matthew Frankel, which will tell you everything you need to know, provided you borrowed money from the federal government and not a private lender.

Even if you didn't take out federal loans, if you're struggling to make your payments, you shouldn't hesitate to reach out to your lender and ask that your terms be renegotiated. Remember, lenders don't want you to default on your debt, because when you do, they don't get paid. A healthy dose of desperation might buy you some leeway.

Finally, if you are able to manage your payments, you might consider putting whatever extra money you come by into those loans to knock them out more quickly. The sooner you eliminate your student debt, the more flexibility you'll have to meet your other financial obligations and goals.