Sadly, the answer is "not even close."

No matter your age or how much you earn, you never know when you might encounter a true financial emergency. It might come in the form of a giant medical expense, a home repair, or an unexpected tax bill. Or it might be a matter of losing your job and not having an income for several months while you look for work. Regardless of the actual circumstances, the only way to protect yourself from the unknown is to amass a healthy chunk of savings.

How much of an emergency fund should you have? It depends on whether you own a home, have a reliable source of income, or care for multiple dependents, but at a bare minimum, you should aim to have three to six months' worth of living expenses socked away in an accessible savings account.

Of course, that's just the minimum. If you have multiple kids and a mortgage, you're probably better off saving enough to cover nine months of living expenses, or even a year's worth. The same holds true if you're self-employed and have periods where your income wanes. 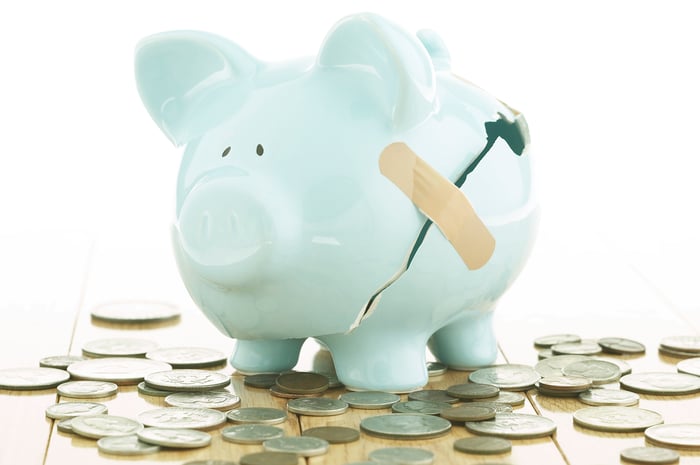 But while most people know they're supposed to save for emergencies, a shockingly small number of Americans actually do. In a 2016 GoBankingRates survey, 69% of U.S. adults admitted to having less than $1,000 in the bank, while 34% said they have no savings at all. In fact, only 15% of the U.S. population has $10,000 or more in savings -- an amount that, in theory, should be enough to cover three months of living expenses, and possibly more, for a large number of working adults.

This data is consistent with a study released last year by the Associated Press and NORC at the University of Chicago, which found that 75% of households earning less than $50,000, and 67% of households earning between $50,000 and $100,000, don't have the cash on hand to cover a $1,000 emergency. And in a 2015 report by the Federal Reserve, almost half of U.S. adults said they couldn't manage to come up with a mere $400 on the spot.

It's therefore pretty clear that the average American isn't equipped to handle even a moderate financial emergency. And those who don't change their ways might come to face some serious consequences as a result.

Why we're not saving

There's a host of reasons Americans struggle to save. The average younger American aged 20 to 30 spends roughly $350 a month on student loan payments -- money that could otherwise go toward building an emergency fund. Meanwhile, the typical U.S. adult spends close to $9,600 a year on healthcare -- an almost staggering figure.

And let's not forget housing, which constitutes many households' single greatest expense. Given that the typical American pays roughly $18,000 a year to own a home (including mortgage payments, homeowner's insurance, and utilities), and that the average household earns just $74,000 a year, when you factor in income taxes and other costs, that doesn't leave a whole lot of wiggle room for savings.

But easy as it is to shun wealthier Americans for their misplaced priorities, the fact is that when it comes to financial emergencies, they're just as vulnerable as their lower-earning counterparts. That's why all workers, regardless of income, need to pledge to do better going forward. If they don't, they'll open themselves up to a world of credit card debt and the vicious cycle of financial upheaval that tends to come along with it.

When people without savings encounter unplanned expenses, they often resort to credit card debt -- an incredibly costly mistake. Case in point: If you're forced to charge a $1,000 bill on a credit card at 20% interest, and it takes you three years to pay it off, you'll wind up spending an additional $337. And that's a lot of money for someone with less than $1,000 to his or her name. Not only that, but the more debt you take on, you more you risk damaging your credit, and with that comes a whole new world of unsavory repercussions.

A much better solution is to work on building your emergency savings, even if it means making sacrifices to get there. Now you can approach this in one of two ways -- you can scale back one or two larger expenses, or you can make a bunch of smaller changes that work to free up similar amounts of cash.

Here's an example. Imagine that instead of paying $725 a month to own a car (which, according to AAA, is what it costs the typical American), you give up your vehicle, start taking the bus, and shave $500 a month off your transportation costs. You'll lose the convenience of having a car at your disposal, but you'll be $6,000 richer by year's end. On the other hand, you might choose to keep your car but save $150 a month by getting rid of cable, reduce your leisure spending by $200 a month, and bank a final $150 a month by packing your lunch during the week instead of buying it fresh. At the end of the day, it really doesn't matter how you save that money, as long as you save it.

Now if your budget is truly maxed out on essentials, you'll need to consider getting a second job to give your savings a fighting chance. If you don't want to spend every waking minute working (which is totally understandable), start by giving up two nights a week, or one weekend a month. The key is to do something to build your savings before an emergency strikes -- because if you don't, your finances might suffer for many, many years to come.