Please ensure Javascript is enabled for purposes of website accessibility
Log In Help Join The Motley Fool
Free Article Join Over 1 Million Premium Members And Get More In-Depth Stock Guidance and Research
By Maurie Backman - Jun 19, 2017 at 6:29AM

There's a reason 401(k) plans are a popular choice for those looking to set aside money for the future. Not only are contributions traditionally tax-free, but because they're deducted directly from earnings, the process of funding a 401(k) is as seamless as can be. That's why it's surprising to learn that the average American does not, in fact, have a 401(k) -- especially given the number of employees who have the option to participate in one.

According to data from the U.S. Census Bureau, only 32% of Americans are saving for retirement in a 401(k). Granted, that owes partly to the fact that 401(k)s are employer-dependent, and not every company offers one. 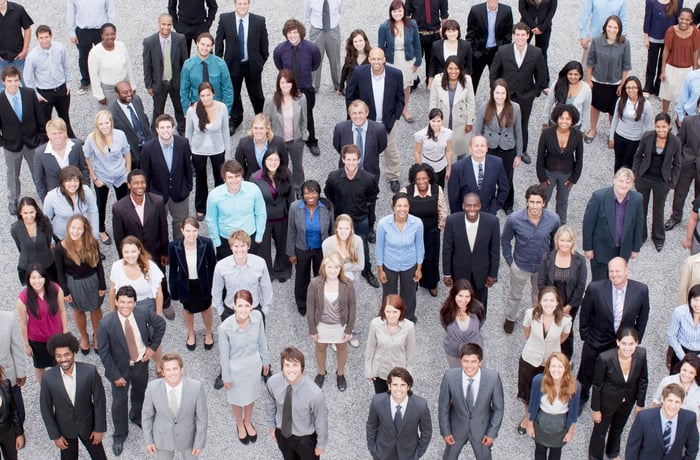 Data from the Census Bureau suggests that as little as 14% of all employers offer a 401(k), yet Census researchers recently estimated that 79% of Americans work for an employer that sponsors a 401(k)-style retirement plan. How is that possible? Large companies that employ high numbers of workers are the most likely to sponsor retirement plans.

All that said, not everyone who's offered an employer-sponsored plan actually takes advantage of it. Of those 79% of Americans who get the choice to fund a 401(k), only 41% opt to participate. As such, just 32% of the total workforce is saving in a 401(k).

We're falling behind on savings

Even those who have 401(k)s aren't funding their accounts adequately. The average American's 401(k) balance is $96,288, though that number varies by age group. While savers under 25 have an average of just over $4,000 saved, those aged 65 and older have an average balance of roughly $200,000. But that's not very much in the grand scheme of retirement, especially when you consider the fact that one in four 65-year-olds today will live past age 90.

Meanwhile, if you're among the 79% of employees who can, in theory, participate in a 401(k), then it's time to start capitalizing on that opportunity. Even if you can't afford to save the maximum, you should at least contribute enough to take full advantage of your employer's 401(k) match. And while it's always better to save more than less, if you start funding your 401(k) early enough in your career, you'd be surprised at what your savings might eventually grow to, even if your monthly contributions are modest.

The following table shows how much you stand to amass in your 401(k) depending on the age at which you first start funding it:

As you can see, you don't have to get anywhere near the annual 401(k) contribution limit to accumulate a respectable nest egg. If you contribute just $200 a month starting at age 25, and continue to do so for 40 years, you'll have $622,000 in retirement income if your investments generate an average annual 8% return, which is just below the stock market's average.

Of course, the longer you wait to fund that 401(k), the less you stand to gain over time, so if you have the option to put money into an employer-sponsored account, start doing so immediately. Though the typical American isn't saving in a 401(k), many workers who fall into that category are actively choosing not to take advantage of an otherwise prime opportunity. And if they don't change their ways, they're going to be sorry once retirement rolls around.