Americans are spending more money on vehicles these days, and in doing so, may be putting their finances at risk.

Americans are no strangers to mortgage debt, student debt, and credit card debt. But a growing number of consumers are adding a new category to the mix: auto debt. According to recent data from Edmunds.com, U.S. car buyers are now taking on larger amounts of debt to finance pricier new cars. Last month, borrowers took out $31,000 in auto loans, on average, with associated monthly payments of $517 -- the highest amount on record so far this year.

But it's not just how much we're borrowing, it's also the length of time during which we're willing to remain in debt. Edmunds reports that the average auto loan last month covered a nearly six-year repayment period -- the longest since it began tracking this data back in 2002. 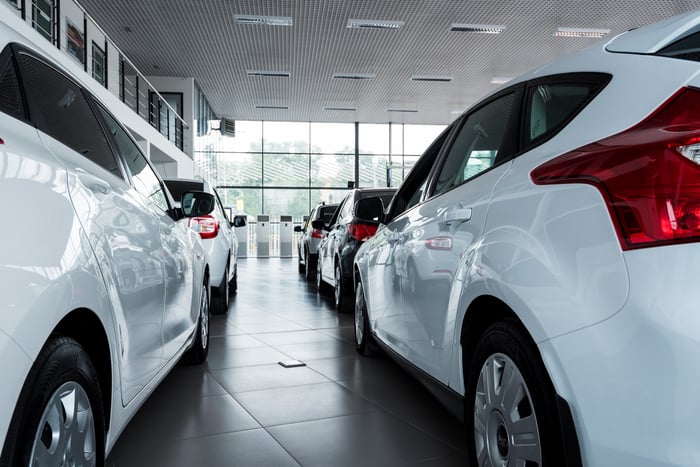 And it's not like more debt translates into less money up front, either. In fact, last month, consumers made an average car down payment of $2,453, which represents a significant 7% increase from the previous year.

Now you might say that this uptick in auto debt is a positive trend, as it shows that consumers have more confidence not just in their ability to keep up with their payments but in the economy on a whole. On the other hand, many of those who take on excessive amounts of auto debt will ultimately end up stretching themselves too thin. And with that comes the risk of not just losing the vehicles they've worked so hard to buy but damaging their finances in the process.

How much is a fancy car worth?

Though some of us might view owning a car as a luxury, in reality, having a vehicle is necessary in many parts of the country, where public transportation is sparse or nonexistent. In fact, of the 95% of U.S. households that own vehicles, 85% rely on those cars in order to commute to work.

But just because you need a car doesn't mean you should buy the most expensive one your local dealership is offering. Yet a big reason for the aforementioned borrowing trend has to do with the types of cars we're choosing. Edmunds reports that many consumers are buying cars that are more expensive than necessary, mostly because they're drawn to the exciting new features they offer.

Furthermore, with gas prices holding low and steady over the past number of years, consumers aren't nearly as drawn to the compact, affordable, fuel-efficient cars many of us were buying a decade ago. Instead, they're looking at SUVs, gas mileage be damned.

The problem with overspending on a car, however, is twofold. First, the higher a payment you take on, the less wiggle room you'll have in your budget for other expenses, including the unexpected ones that inevitably arise. Given that most Americans are already living paycheck to paycheck, losing that flexibility could spell serious trouble in the absence of a well-stocked emergency fund.

But overspending on a vehicle can do more than compromise your immediate finances; it can also impact your ability to meet your long-term goals, like establishing a retirement nest egg. Imagine you're spending $517 a month on a car payment for 69 months -- the latest estimate out of Edmunds. All told, you'll wind up paying $35,673, not including whatever amount you're required to put down for your car. But what if you were to buy a less fancy model and slash that car payment by 30%? Even if we were to assume the same (lengthy) repayment period, you'd be looking at a total of just $24,971, or roughly $362 per month.

Now, let's say that instead of paying an extra $155 a month for your car, you save that money in a retirement plan instead. If you then invest that money and manage to bring in an average annual 7% return (which is more than feasible with a stock-heavy portfolio), over a six-year period, you'll amass a cool $13,000. Even if you don't add another dime to your retirement savings from that point on, if you leave that $13,000 alone for another 20 years, you'll end up with a $50,000 nest egg assuming that same average annual return. And $50,000 is more than what a lot of today's seniors start off with in retirement.

So there you have it: You can buy an expensive car and struggle to make your monthly payments, or you can scale back that purchase, bank the difference, and give yourself more short- and long-term financial flexibility. It's really just a matter of how much you're willing to give up for a few extra bells and whistles.