Before your Medicare benefits start, here's what you need to know.

Most Americans are eligible for Medicare benefits beginning in the month of their 65th birthday. Although it is the most widely used health insurance plan in the United States, many pre-retirees don't understand it well. With that in mind, if you're getting close to turning 65, here's some basic information about Medicare that you need to know.

The four "parts" of Medicare

There are four different types of Medicare insurance, known as "parts," designated with letters A through D. Here's the difference between each one:

Collectively, Medicare Parts A and B are known as "original Medicare." These are the parts that nearly all senior citizens have. 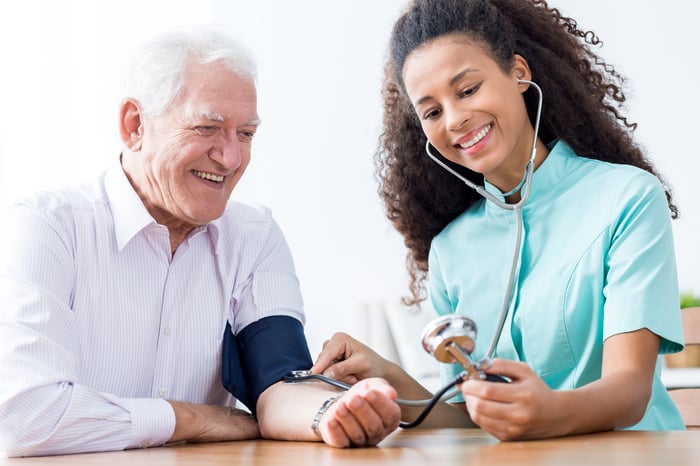 Do you need to sign up for Medicare at 65?

If you're already collecting Social Security benefits, you will automatically be enrolled in Medicare, starting on the first day of the month in which you turn 65.

There's a possible exception if you're covered under an employer's health plan (not through COBRA or retiree coverage). If your employer has 20 or more employees, it meets the definition of "group coverage" and you don't need to enroll in Medicare during your initial enrollment period. Instead, you'll get a special enrollment period when you leave your job or your group coverage ends.

Having said that, it's still a good idea to sign up for Medicare Part A at 65. It's free, so there's really no reason not to. On the other hand, Medicare Part B has a monthly premium you'll have to pay, so it can be smart to wait if you aren't required to sign up during your initial enrollment period.

How much does Medicare cost?

For most retirees, Medicare Part A is free, meaning you probably won't have to pay a premium for your hospital insurance.

Medicare Part B, medical insurance, is another story. The standard Medicare Part B premium is $134 per month in 2017, although beneficiaries who pay their premiums directly through their Social Security benefits pay slightly less, because of cost-of-living adjustment rules.

In addition, high-income retirees pay higher premiums. This is based on the beneficiary's income from two years ago, so 2015 income was considered for 2017 Medicare Part B premiums. Single taxpayers with adjusted gross income greater than $85,000 and married couples with combined incomes over $170,000 pay Part B premiums of $187.50 to $428.60 per month, depending on their specific income level.

Finally, Medicare advantage and prescription-drug plans have costs that vary widely, depending on variables such as location and scope of coverage.

What original Medicare does (and does not) cover

As I mentioned, "original Medicare" refers to parts A and B. Since virtually all Americans over 65 will have original Medicare, it's important to know what it covers, and what you'll still be responsible for paying.

First, of all, Medicare Part A covers hospital service, including meals, drugs, and other services while hospitalized. It also covers skilled nursing facilities for a limited amount of time, nursing home care that is deemed medically necessary, hospice care, and some home health services.

In addition to doctors' office visits, Medicare Part B covers outpatient surgeries, as well as necessary medical supplies, such as wheelchairs and walkers. It also pays for preventative services such as lab tests, disease screenings, and disease-preventing services, such as an annual flu shot.

However, there are some medical costs that Medicare doesn't cover, such as:

In addition to this list, it's important to point out that you'll have some out-of-pocket costs for covered services as well. For starters, Medicare Part A has a $1,316 deductible per benefit period for inpatient hospital stays, and a coinsurance requirement of at least $329 per day for stays longer than 60 days. Skilled nursing facility stays are only fully covered for 20 days, and you'll pay a $164.50 daily coinsurance payment for longer stays, up to 100 days, at which point Medicare stops paying.

Part B has a lower $183 annual deductible, but after this is met, Medicare generally covers 80% of covered services, leaving you responsible for the other 20%.

How to protect yourself from unexpected costs

These copays, deductibles, and coinsurance requirements are collectively referred to as "Medigaps." To limit your unexpected healthcare costs, a Medicare Supplemental Insurance Plan, or Medigap plan, can be purchased.

There are 10 different types of Medigap plans, and price and availability depend on your location. You can read the features of all 10 plans at Medicare's website, but an important point is that Plan F is the most comprehensive, as well as the most popular. While it's a bit more expensive than other Medigap plans (average monthly cost of $159-$239 for a 65-year-old male), it covers virtually every copay, deductible, or coinsurance payment Medicare Parts A and B could ask you to pay.

The bottom line is that by knowing the basics of Medicare, you'll know when and how to sign up, how much you'll pay for it, how much of your costs Medicare will cover, and how to protect yourself from uncertainty.