Many people dream of being able to retire early, envisioning trips to exotic islands, a house on the beach, or simply never using an alarm clock again.

For many people, though, early retirement isn't just a dream. In fact, 51% of Americans retire between the ages of 61 and 65, and another 18% leave the workforce even earlier than that. 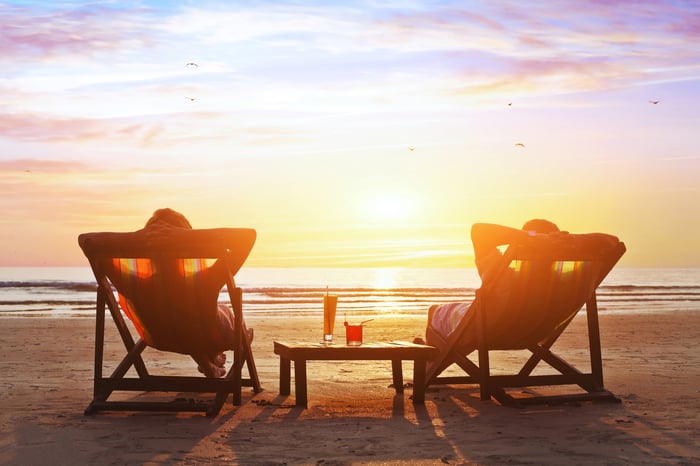 Early retirement doesn't always involve luxurious vacations and a life of relaxation, though. Some people are forced out of the workforce due to a job loss, the inability to find work, or health issues.

But even if you retire voluntarily, early retirement may not be all that you've imagined. Unless you're a millionaire and have all your financial needs covered for the rest of your life, retiring early may cause more financial strain than it's worth.

Here are a few of the reasons why early retirement may not be a good idea.

1. You'll have to wait longer for (full) benefits

While you can start receiving Social Security benefits at age 62, you won't receive your full benefits until you reach your full retirement age (which is 67 for those born in 1960 or later).

The average American will receive about $1,360 per month in Social Security benefits this year, assuming they waited until their full retirement age to start receiving benefits. If they had instead filed at age 62, they'd now be getting just $952 per month. Money will likely already be tight during retirement, as you'll be living on a fixed income, and that $400 per month can make a big difference.

2. You're on your own for health insurance

Once you turn 65, you'll be eligible for Medicare (assuming you've worked for at least 10 years and paid Medicare taxes). But before that, if you're not covered through your employer, you'll have to find health insurance on your own. Picking out a health insurance policy can be a headache, and your coverage will likely be more expensive than Medicare or the insurance you received from an employer.

The average premium for single-person coverage in 2017 is about $393 per month, according to data compiled by eHealth, and for families, that number is about $1,021 per month. Those numbers can vary widely, though, based on your age, location, income, and general health.

Also, healthcare coverage is a hot-button issue in politics, and it's always a possibility that current healthcare laws may change in the coming years -- which would change the price of insurance as well. So even if you can afford to buy individual coverage now, the last thing you want is to retire and then discover you can no longer afford your monthly premiums -- or worse, learn that you're no longer covered under your current plan.

3. It could harm your health

You may like to think that retirement is a great move for your mental and physical health, but it might actually be the opposite. According to a study by the National Bureau of Economic Research, being fully retired (as opposed to working part-time) can lead to an increase in illness and decreased mobility, as well as a decline in mental health.

Researchers pointed out a few reasons for the health issues, including a lack of social support and insufficient physical activity -- though the study also concluded that the harmful effects of retirement were often mitigated by working part-time, maintaining strong social connections, and engaging in physical activity.

In other words, if you're planning on taking it easy and avoiding physical and mental effort, your health may suffer.

4. You'll need to save more

If you retire early, your retirement savings will need to last longer. You'll be drawing down your funds, rather than letting them continue to grow, and you may miss out on a few years' worth of matching 401(k) contributions from your employer -- those alone may be worth several thousand dollars a year.

So, if you retire at 62 years old, you'll have $500,000 to last through retirement. But if you wait until age 70 and use those eight years to continue saving and earning interest, you could end up with almost twice as much in your retirement fund.

Retirement is something to look forward to, but be sure to think long and hard about when it will be the right time for you to leave work for good. You may be itching to take that dream vacation and say goodbye to your boss forever, but waiting until you're truly ready will make your retirement far more fulfilling.

4 Reasons Not to Retire Early @themotleyfool #stocks Next Article
Current