Though our economy has seen its share of recessions, one of the most damaging downturns in history was none other than the fairly recent Great Recession that lasted from 2007 to 2009. During that time, the housing and financial markets collapsed, and countless workers lost their savings, jobs, and even their homes. The Great Recession was so bad that a large number of Americans have yet to fully recover even to this date.

Given the number of current workers who lived through that ordeal, you'd think more folks would be taking steps to protect themselves from a recurrence. But a recent study by GOBankingRates shows just how unprepared for a recession the majority of us are. 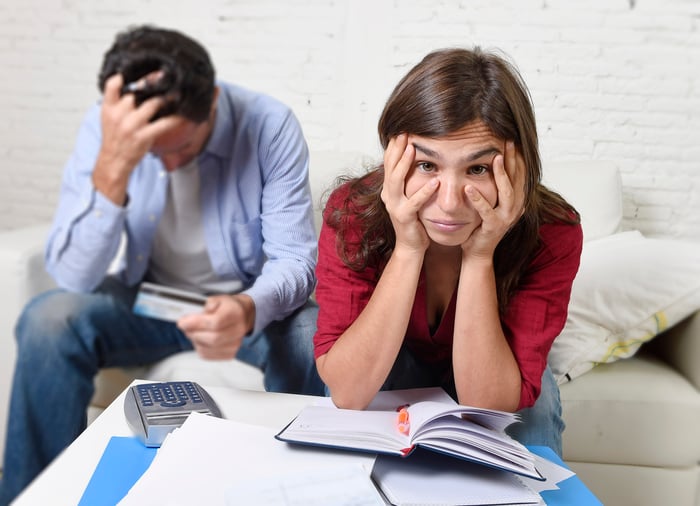 According to the data collected, an estimated 46% of Americans aged 25 to 44 are living paycheck to paycheck without any sort of financial safety net. Even more alarmingly, that percentage climbs to 50% among 45- to 54-year-olds and 53% among 55- to 64-year-olds.

Of course, it's hard to predict when the next recession might hit, and we can't all live in fear of a major downturn. At the same time, if more of us don't get our finances in order sooner rather than later, we'll continue to put ourselves at risk of suffering the same fate so many folks fell victim to less than a decade ago.

You might chalk the 2007-2009 recession up to a major fluke, but in reality, recessions are more common than you'd think. In fact, since the late 1700s, our country has seen as many as 47 different recessions, and while some of those lasted just months, others lasted for multiple years. Now just because we've been recession-free for roughly eight years doesn't necessarily mean we're due for another one soon, but because the economy tends to be somewhat cyclical, we can't rule out the possibility of another significant downturn within the next half-decade.

But regardless of whether the next recession hits next year or a decade from now, the key is to prepare for the worst, even if the worst never actually comes to be. How do you that do? It's a simple matter of getting your finances under control -- while you still have an income.

One of the easiest ways to make your lifestyle recession-proof (or as recession-proof as possible) is to save more money and spend considerably than what you bring home. Let's start with the former. Working adults are advised to have at least three to six months' worth of living expenses holed up in an emergency fund. The reason? You never know when an unanticipated bill might appear or when you might lose your job and find yourself without an income for an extended period of time.

It's the latter that wound up being the case for thousands upon thousands of workers during the last recession, and it wasn't just lower earners who took the hit. Layoffs were rampant during the Great Recession, and they impacted everyone from entry-level employees to CEOs and high-level execs. If you sock away enough cash to cover a solid half-year of living costs, you'll have funds to tap if a major downturn causes you to lose your job, and it takes time to find a replacement.

Establishing that safety net, however, is only part of the picture. The other step you'll need to take is to stop living paycheck to paycheck and start living below your means. When you spend every dollar you bring home month after month, you leave yourself in a financially vulnerable spot so that if you do lose your job, or end up with a reduction in income -- which may very well happen if the economy implodes and you're forced to take a lower-paying position until things even out -- you may not manage to cover your monthly obligations. A better bet is to consistently save 15% to 20% of your paycheck and spend no more than 80% to 85% of what you bring home. 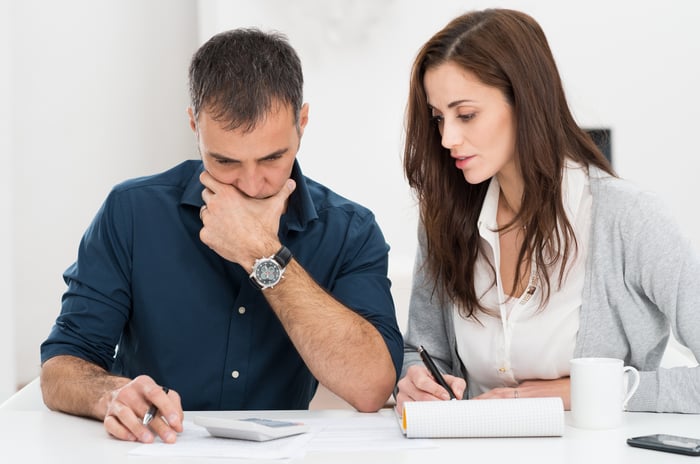 Furthermore, while it's best to keep all of your living costs down, you should especially make sure to limit your housing expenses to 30% or less of your take-home pay. If you lose your job and need to cut corners, you can always cancel your cable package or gym membership, but you can't stop paying your mortgage.

Of course, adjusting your spending and saving habits may take time, and unless a windfall happens to land in your lap, it could take several years to amass enough savings to cover six months of expenses. But the sooner you start lowering your current costs, the more money you'll free up to save.

Additionally, if your current savings are truly nonexistent, you might consider getting a side job, even if temporarily, to kick-start your efforts. Bankrate reports that of the 44 million Americans who currently work a second gig, more than one-third are able to generate an extra $500 a month or more. And that could go a long way toward building an emergency fund.

While we don't know when the next recession is coming, what we do know is that most Americans are woefully unprepared. And the sooner we change our habits, the safer we'll be when the inevitable does indeed strike.