For years, working Americans have been losing faith in Social Security's long-term viability. In fact, last year, 77% of workers said they don't expect the program to be around once the time comes for them to retire. But while much of that sentiment stems from miseducation and guesswork, if there's anyone in a good position to predict the fate of Social Security, it's the program's trustees.

Unfortunately, this year's Trustees Report doesn't paint the most glorious picture. According to the latest projections, Social Security's trust funds are still set to run out of money come 2034, and while that prediction is unchanged from the previous year, it is something for future recipients to think about. 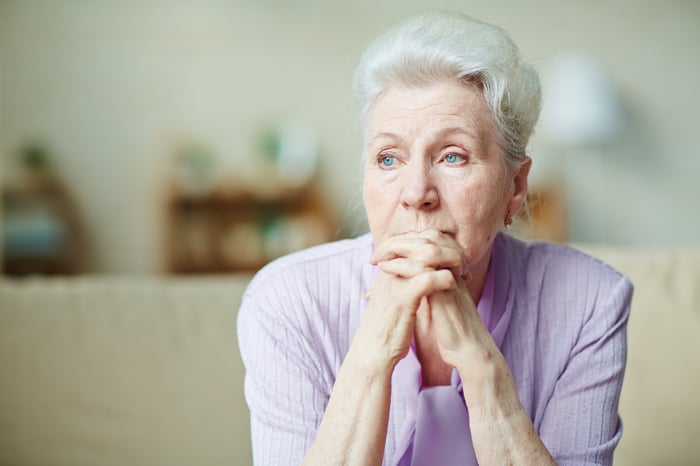 See, the program needs those trust funds to compensate for the fact that future incoming tax revenues won't suffice in keeping up with scheduled benefits. Once they're depleted, there won't be any way to bridge that gap. And since Congress has yet to come up with a solution for fixing the program's impending shortfall, it's not surprising that so many working Americans are worried -- not to mention bitter that they're conceivably paying into a program that won't be similarly available to them in the future.

In light of the seemingly perpetual stream of negative news surrounding Social Security, there comes a point where it might just pay to give up on the program entirely. The question is: Are we there yet?

It's hard to put our faith in a program saddled with financial woes. But before we write off Social Security completely, let's remember one key takeaway from the latest Trustees Report: Even if the aforementioned trust funds do run dry, and Congress fails to implement a plan to address the ensuing shortfall, Social Security will still pay out an estimated 77% of scheduled benefits.

Now, given the number of retirees who rely on Social Security in the absence of independent savings, that sort of cut could be downright catastrophic. On the other hand, collecting 77% of benefits is hardly the same as getting nothing out of the program at all.

Even if that payout estimate drops in the coming years, which could very well happen, there's been no indication that we'll reach a point where Social Security will actually go away completely. And that's an important distinction to keep in mind.

Taking retirement into our own hands

While there's no need to throw in the towel on Social Security at present, in some ways, it does pay to pretend those benefits won't be around in the future. See, even in a best-care scenario (meaning no future program cuts), the average recipient's Social Security payments will only suffice in replacing about 40% of his or her previous income. Most of us, however, require more like 80% of our former earnings to stay afloat financially in retirement, and some of us will inevitably wind up needing even more. That's why it's not such a bad thing that most people think Social Security won't be around in the future -- because that point alone should serve as motivation to ramp up our savings efforts.

Let's assume we're looking at a 40-year-old worker whose projected ending salary is $100,000. In a typical scenario, that person will need $80,000 a year in total income to pay the bills in retirement. Assuming that person stops working at 67 and lives another 20 years, which is mostly in line with Social Security's latest life-expectancy tables, it means he or she will need a total of $1.6 million throughout retirement.

Now let's say we take Social Security out of the equation, meaning our hypothetical worker will need to amass that $1.6 million on his or her own. Though achieving that goal might seem impossible, if that worker starts saving $1,500 a month immediately, thus maxing out his or her 401(k), and we apply an average annual 8% return on investment to that portfolio, which is just below the stock market's average, we'll arrive at $1.572 million, which is pretty darn close.

Of course, that assumes $0 out of Social Security, which, as we just learned, is extremely unlikely to be the case. However, it's a good assumption to make, because it might push some of us to do better with our savings and then have whatever cash comes in from Social Security as gravy.

While Social Security is by no means going away, pretending it is could be the impetus today's workers need to get serious about saving. An estimated 33% of Americans have no money set aside for the future, so the sooner we change our ways, the better off we'll be in retirement -- regardless of what Social Security actually has to offer us at that point.