Americans have a host of financial fears, many of which center around retirement. But if there's one aspect of retirement that has us shaking in our boots, it's the concern about the affordability of healthcare during our senior years.

In a recent Northwestern Mutual study, 58% of U.S. adults cited healthcare as their chief retirement concern, representing a 13% increase from the previous year. And the sad part? They're not wrong.

Countless seniors rely on Social Security to provide the majority, if not all, of their income in retirement. The problem, however, is that in recent years, those benefits haven't come close to keeping up with rising medical costs. 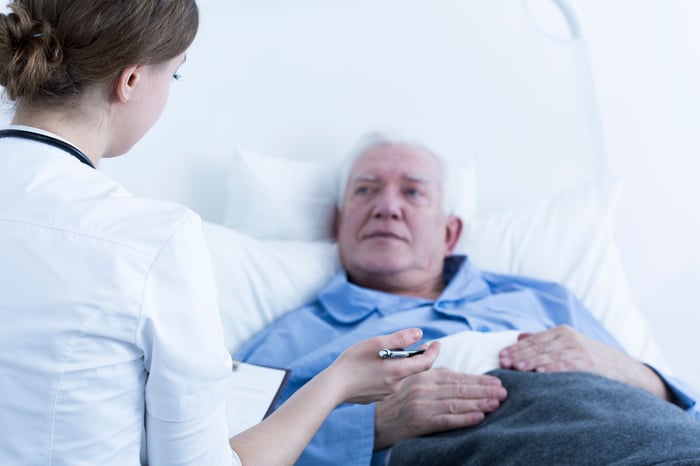 Social Security benefits are calculated based on a recipient's personal earnings record. However, once a base benefit amount is established, it's eligible for a yearly cost-of-living adjustment, or COLA. COLAs were implemented back in 1975, and their purpose was to help seniors retain their buying power in the face of inflation.

The problem, however, is that COLAs haven't been doing a good enough job of keeping up with senior living costs -- and they don't always come through. In fact, COLAS have averaged just 1.66% over the past 10 years, and during that time frame, there were three years (2009, 2010, and 2015) in which Social Security recipients saw no COLA at all. Senior healthcare expenses, by contrast, are projected to rise at a rate of 5.47% per year going forward, which means that if COLAs keep averaging under 2%, the retirees who count on them are going to be out of luck.

But COLAs aside, many seniors simply don't have enough independent savings to cover their medical costs in full. The average household nearing retirement has just under $164,000 set aside, while the typical Social Security recipient today collects $16,320 a year in benefits. Healthcare, meanwhile, is expected to cost the average healthy 65-year-old couple today $400,000 or more over the course of retirement. And reading between the lines, those with medical issues might see their expenses rise well above this level.

It's no wonder, then, that so many Americans regard healthcare as the one impediment to long-term financial security. The good news, however, is that those who are still working can compensate for those ever-climbing costs by saving enough money to buy themselves the financial security they need.

Though the aforementioned $400,000 healthcare bill in retirement is a rather daunting figure, those who are still working have one key advantage: They still have an opportunity to save more.

The following table shows how much of a nest egg you might accumulate if you set aside $300 a month for savings over various time frames:

Clearly, starting early is the key to amassing more savings. Just as clear is the fact that many workers don't have the luxury of going back in time and altering their savings habits in their 20s and 30s. But even 40-something workers have a key opportunity to accumulate some wealth that, combined with Social Security and perhaps another income source, like a part-time job, lends itself to a degree of financial security down the line.

Of course, older workers have fewer options for building their nest eggs if they've failed to do so thus far, but that doesn't mean they need to give up, either. If you're in your early-to-mid-60s and are thinking of retiring in the next year or two, don't do it. Work an extra four or five years, max out your retirement plan contributions during that time, and boost your Social Security benefits by waiting as long as possible to claim them.

Another thing you can do is keep tabs on your health during your working years so that you're less likely to enter retirement with an exacerbated issue. And if you're older, be sure to enroll in Medicare on time to keep your premium costs to a minimum.

Though healthcare might seem like an insurmountable financial hurdle in the grand scheme of retirement, it doesn't have to be the one thing that prevents you from achieving the sense of financial security you've worked for all your life. Save aggressively for the remainder of your career, be smart about Social Security, and take steps to preserve your health at all times. If you do, you'll be better positioned to deal with this immense, albeit unavoidable, expense.