Please ensure Javascript is enabled for purposes of website accessibility
Log In Help Join The Motley Fool
Free Article Join Over 1 Million Premium Members And Get More In-Depth Stock Guidance and Research
By Maurie Backman - Oct 30, 2017 at 7:48AM

Social Security is getting a boost in 2018. Here's why that's nothing special.

More than 42 million retired workers depend on Social Security to cover their bills in retirement. And while those benefits are calculated on an individual level based on each worker's 35 years of highest earnings, that doesn't mean they're set in stone. Rather, ever since 1975, Social Security recipients have been eligible for automatic cost-of-living adjustments, or COLAS, which are designed to help seniors retain their buying power in the face of inflation.

But recent history hasn't been kind to enrollees who depend on those COLAs to stay afloat financially. In 2017, recipients got a mere 0.3% increase in their benefits, while 2016 saw no COLA at all. 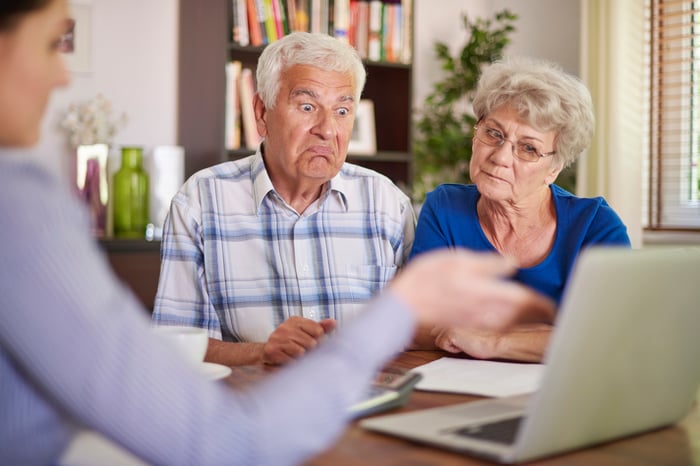 Here's what I think of your COLA. Image source: Getty Images.

Next year, however, enrollees are getting a more sizable boost. Come 2018, Social Security benefits will rise by 2%, which is the highest increase the program has dished out in six years. But before you bust out your party hat, take that news with a much-needed dose of cynicism -- because while a 2% raise is better than none at all, it's hardly anything to write home about. Here's why.

1. It'll get eaten up by Medicare

Retirees whose Medicare Part B premiums are deducted from their Social Security payments are subject to a "hold harmless" provision that prevents their benefits from getting slashed when Medicare costs climb too high. Last year, countless seniors were protected by that provision, and as such, most Medicare enrollees currently pay $109 toward their Part B premiums, even though the standard premium amount this year is $134. But now that Social Security is going up, those who benefited from that provision will start paying an extra $25 toward their Part B costs, thus negating the option to get their hands on that money. In fact, the Senior Citizens League reports that about 70% of retirees won't really see an income increase in 2018, because that money will be eaten up by Medicare.

2. Your benefits won't actually keep up with inflation

The purpose of Social Security COLAs is to help seniors keep pace with inflation. But historically, they've failed to do that. Over the past four years, 90% of seniors have seen their household spending increase at a significantly higher rate than their retirement benefits. Furthermore, because senior healthcare costs are projected to rise at a rate of 5.47% per year going forward, a mere 2% increase, even if implemented year over year, won't do much to help retirees cover what's often their single greatest expense.

3. You can't live off of Social Security to begin with

A big reason so many seniors anxiously anticipate their COLAS each year is that they're heavily reliant on Social Security benefits to pay the bills. But in reality, banking on COLAs is no way to live. Social Security was never designed to sustain retirees without additional sources of income. Currently, the average beneficiary gets roughly $1,360 a month, or $16,320 a year, which is hardly enough to survive on. Even if we take Medicare out of the equation, a 2% increase translates into just $27 extra per month for the typical retiree. And that's not enough to make a real difference when you're already struggling to make ends meet.

It's true that a small Social Security COLA is preferable to a non-existent one, but rather than eagerly awaiting that pittance, come up with a plan to get your finances under control. This might mean downsizing your home for a cheaper one, working a part-time job, or finding other ways to slash your expenses. It's better than spending the bulk of your year worrying about whether a meager benefit boost will make its way into your pocket.