Tired of spending a huge chunk of your paycheck at the supermarket? Here's a better way to shop.

As 2017 begins to wind down, many of us are apt to have New Year's resolutions on the brain. And if you're smart, one of those will be to save more money in 2018.

When we think about the various things we all spend money on, we can't help but put groceries pretty high up on that list. We all need to eat, right? In fact, of all the things U.S. households spend money on, groceries are actually the second most expensive monthly budget item, according to data from GOBanking Rates. At an average of $302 per month, we're spending more on groceries than car payments, household necessities, and clothing combined. 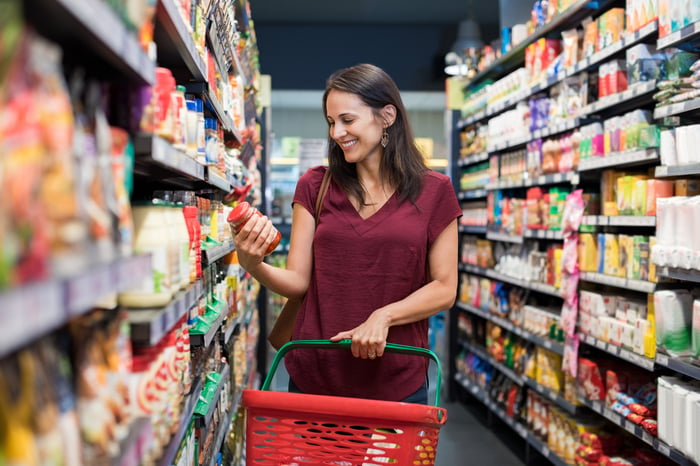 And the sad part? We don't even eat all of the things we buy at the supermarket. Americans throw out an estimated 80 billion pounds of food every year, with 76% admitting to tossing leftovers on a monthly basis. All told, the typical household wastes $640 annually on unused grocery items. And given that 39% of adults have absolutely no savings, that's money that could certainly come in handy elsewhere.

If you're tired of busting your budget at the supermarket each month, it may be time to rethink your shopping habits. Here are a few tricks that'll help you save big -- and waste less food in the process.

A big reason so many of us throw out food is that we forget what we have at home and end up buying items we really don't need. A better bet is to keep a running inventory on what's in your pantry, fridge, and freezer. You can do this with a simple spreadsheet, or use apps like Google Keep to update and maintain your lists. This way, you won't do that thing where you stock up on pasta, only to find six boxes stashed in the back corner of your cabinet.

You'd think this one would be pretty basic, but surprisingly, nearly 30% of shoppers aged 18 to 36 and 25% of shoppers aged 37 to 50 don't use grocery lists when they hit the stores. But without a list, you're more likely not only to buy things you don't need, but also to fall victim to impulse purchases.

Think about it: You're wandering aimlessly through the aisles without a list in hand, and you see a display of gourmet spreads and dips. Suddenly, all reasoning goes out the window as you throw $30 worth of condiments into your shopping cart. Big mistake. Before you leave for the supermarket, figure out what you need, make a list, and follow it. And don't buy anything else.

Again, this may seem like an obvious piece of advice, but you'd be surprised at the number of shoppers who don't use coupons. In 2012, 305 billion consumer packaged goods coupons were made available to U.S. households, 38% of which were food based. Only 2.9 billion coupons were actually redeemed, meaning Americans gave up billions of dollars in total savings. And while we don't know exactly how much of the savings loss was food-related, it's fair to say that a lot of people paid more than they needed to at the supermarket.

A better approach? Spend five minutes combing the circulars, and identify those coupons that can actually save you money. These days, you don't need to physically clip coupons to snag some deals; many grocers offer digital coupons that you can access online and load to your shopper's card. It doesn't get much simpler.

Many credit cards offer extra cash back for purchases made in supermarkets. Find the right rewards program, and you could save money in the form of bonus cash on your groceries. For example, I do a lot of my grocery shopping at Costco, so I decided to get a Costco Visa card. These days, I collect 2% back on purchases made in store, and so far this year, I've racked up $150 based on grocery purchases alone.

5. Buy items you frequently use in bulk

If you've got the storage space, buying in bulk can pay off in a very big way. That's because you'll typically score a great deal by buying a larger quantity of a given item, whether it's dry goods, meat, or dairy. For example, say your favorite box of cereal costs $2.99 at your local grocery store. A six-pack might cost just $11.99, saving you a cool $1 per box.

But there's a caveat here: Only buy bulk items you know you use on a regular basis. If you eat a couple of shortbread cookies once a month, don't buy a 200-count box because the price per unit is lower than what you'd pay for a 12-pack. Those cookies will go stale before you get a chance to consume them, and then you'll end up having wasted your money.

Saving money on groceries often boils down to getting organized, staying focused, and exercising common sense. If you want to lower your supermarket spending, be strategic about how you shop for food. You'll be thankful for it when you're banking that extra cash at the end of the year.