Student debt can be harder for females to shake, so it's no wonder they come to resent it so heavily.

As student debt crept dangerously close to the $1.5 trillion mark this year, countless borrowers found themselves asking one nagging question: Were those loans worth it? In most cases, the answer was a resounding no. That's the latest from a Credit Loan study, which also found that women were far more likely to regret borrowing money for college than their male counterparts.

Specifically, 70% of female borrowers claim they regret taking on college debt, compared with just 59% of male borrowers. But it's not just that women are more upset about their debt; they're more anxious about it, too. In fact, nearly 80% of female borrowers suffer from loan-related stress, and the intensity of these feelings is almost 18% higher than what anxious men express. And that doesn't bode particularly well for the many young women who will no doubt one day find themselves staring at a loan application document and wondering whether it pays to fill it out. 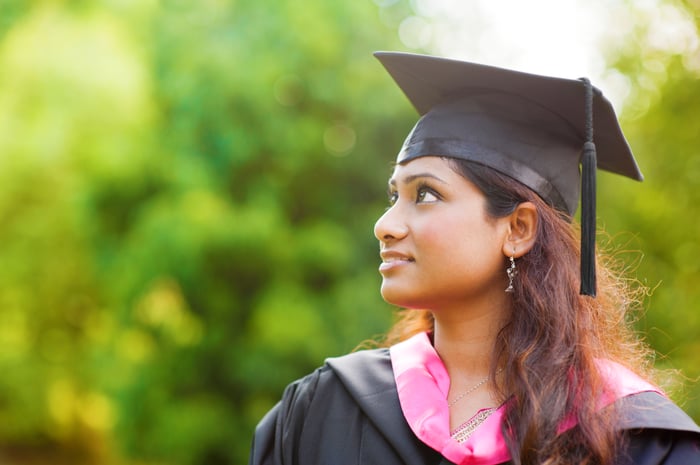 When career growth comes at a cost

There's no question that degree holders have a clear advantage over non-college grads in the workforce. These days, those with college diplomas earn about 56% more than those with high school diplomas alone.

Still, women don't tend to benefit quite as much from those increased wages. That's because the typical woman will earn only about $0.77 to $0.83, on average, for every dollar a male counterpart earns. And because women are likely to earn less, they're also more likely to struggle to repay their debt.

Let's also not forget that women are statistically more likely to take on student debt in the first place. According to the American Association of University Women, about 44% of female students need loans to pay for college, compared with just 39% of male students. In addition, women enrolled in undergrad programs take out $3,100 more than men, on average. As a result of these factors, coupled with the aforementioned wage gap, it usually takes women longer to pay off college loans, which explains why they currently hold almost 67% of outstanding student debt in the country.

Though owing money for college is clearly a tough spot to be in, it's pretty evident that student debt hurts women more so than men on a whole. The good news? Those who currently hold debt have options for paying it off more easily.

Climbing out from under that mountain of debt

If you're struggling with student debt, regardless of whether you're male or female, there are a few things you can do to start digging out of that hole. For one thing, make sure you're not being underpaid at your job. A good way to know is to research your industry and see what people in your area with similar roles are making. Job site Glassdoor has a particularly helpful "Know Your Worth" tool that can assist in this regard.

Second, don't be afraid to fight for a raise if it turns out you aren't being fairly compensated. This will involve doing the aforementioned research, building a case for yourself, and highlighting your value to your employer. It's not an easy or comfortable conversation to have, but it's a crucial one, because if you're able to boost your salary by even a thousand dollars or so per year, that's money that can go directly toward paying down your debt. Also, keep in mind that your future earnings will likely be based on what you're making at present, so negotiating a raise won't just help you get more money today, but also, down the line.

Though you can't go back in time and undo the borrowing you once did, you can take steps to boost your compensation at work, thus making it easier to repay your college loans, and also helping to justify them in the first place. But no matter what approach you take to shedding that student debt, don't sink too much time and energy into bemoaning it. Rather, accept that it was a necessary cost of building a solid career, and pledge to use that success to your advantage.