All things considered, now is a pretty good time to be an active participant in the U.S. economy. Jobs are plentiful. The market has been on a winning streak. And while rising interest rates are a mixed bag, savers can at least rest easy knowing their emergency cash will soon start to earn just a bit more.

It's somewhat surprising, then, to learn that despite all of these factors, more adults have a negative financial outlook than a positive one. In a recent MoneyLion study, 28% of Americans say they feel anxious about their finances, compared with just 19% who feel optimistic. And that's a pretty startling pill to swallow, especially since most Americans also believe they'll earn more money in 2018 than they previously did. 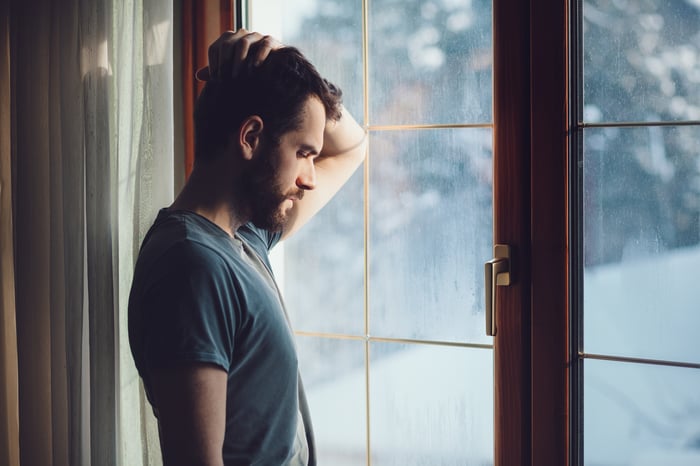 Why are Americans so anxious? In a previous survey, the reasons boiled down to never being able to retire, always living paycheck to paycheck, and being in debt forever. But if those are the issues at play here, there are some solutions that can help.

After a lifetime of hard work, the last thing you want to worry about is never getting to call it quits. But a huge chunk of working adults are risking that very fate by not saving for retirement appropriately. In fact, nearly half of U.S. households have no money set aside for the future, according to the Economic Policy Institute. And that's a problem, because Social Security alone won't be enough to pay the bills in retirement. Or, to put it another way, if you don't save on your own, you'll probably end up working forever, or landing in a precarious financial situation when you're old. Neither is ideal.

The solution? Start saving now, even if in small increments. The beauty of investing your retirement savings (which both IRAs and 401(k)s allow for) is that you have the ability to turn a series of relatively modest contributions into a rather impressive sum over time.

Check out the following table, which shows what saving just $300 a month consistently can do for your nest egg:

Of course, the sooner you begin socking away money for retirement, the better your chances of actually getting to leave the workforce when you want to. Keep in mind, however, that the $300 figure above doesn't even come close to maxing out an IRA or 401(k). For the former, you can contribute up to $5,500 a year if you're under 50, or $6,500 if you're 50 or older. For the latter, these limits just increased to $18,500 and $24,500, respectively. Max out for even a couple of years while contributing smaller amounts consistently, and you stand a much better shot of retiring than you'd think.

A big reason Americans are stuck living paycheck to paycheck is their tendency to save too little and spend too much. If you'd rather break that cycle, then here's what you need to do. First, create a budget, which will help you see where your money is going and how much room for savings your expenses allow for. Only once you have that budget in place will you be in a good position to identify which bills to slash.

And that leads to the second thing you'll need to do, which is start cutting expenses if your current budget doesn't allow you to save at least 10% of your paycheck month after month. Whether you choose to reduce one major expense, like your home, or a series of smaller ones, like your cable bill and takeout habit, is up to you. But you will need to lower your spending if you're tired of the paycheck to paycheck routine.

One additional option you can also consider is picking up some sort of side hustle. Though it's not easy swinging a second gig on top of a full-time job, if you're willing to put in the effort, you can boost your income and use that extra money to pad your savings account. Furthermore, working that extra job might give you the flexibility to cut fewer expenses, thus contributing to a better quality of life.

Never managing to get out of debt is a valid concern, especially since the average household carrying a balance is on the hook for a whopping $16,000. Still, there's no need to resign yourself to taking that debt with you to the grave, especially if you're willing to make an effort to pay it off.

How? It's simple -- just employ the same tactics. Trim expenses from your budget, work extra, and free up cash to apply to your debt. From there, pay the bills that are costing you the most in interest, and work your way down. You can also look into a balance transfer, which may be a good option if your credit itself is relatively strong despite your debt.

If you're starting 2018 with a relatively negative financial outlook, here's your chance to turn things around. You can salvage your retirement, stop living paycheck to paycheck, and break free from the evil cycle of debt. You just need to shift your priorities a little and start making changes for the better.