It's never too early to start thinking about taxes, even if returns aren't officially due for nearly another three months. Since so many folks have a tendency to procrastinate, the sooner you get this year's tax deadline on your calendar, the greater your chances of getting your return in on time.

Your 2017 tax return is due on April 17, 2018, which is actually a couple of days later than usual. Why doesn't Tax Day land on April 15? Because taxes can't be due on a weekend, and April 15 is a Sunday this year. Normally the filing deadline would just be pushed to Monday, but since April 16 is Emancipation Day, a legal holiday in Washington, D.C., filers get until April 17 to get their returns over to the IRS. 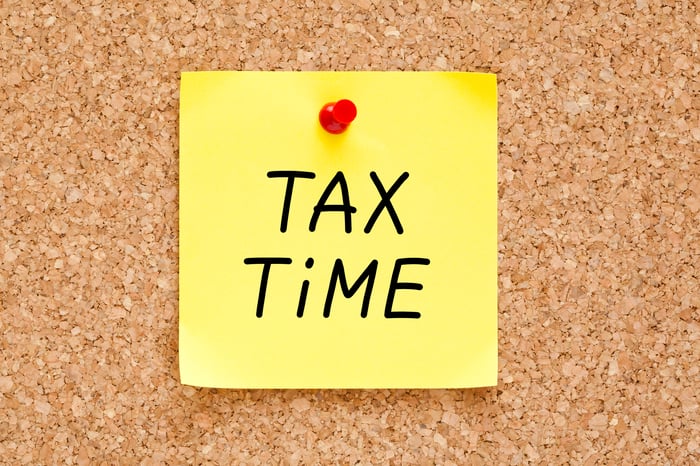 Should you wait to file your taxes on April 17?

Just because taxes are due on April 17 this year doesn't mean you have to wait until then to submit them. The IRS recently announced that it will begin accepting returns as early as Jan. 29, so if you have yours ready by then, or shortly thereafter, it pays to file early for a number of reasons.

First, the sooner you file your taxes, the sooner you'll get your refund, if applicable. Specifically, the IRS says that if you file a return electronically, and don't make any errors on it, you can expect your refund within three weeks' time. The only exception is if you're filing early but also claiming either the Earned Income Tax Credit or Additional Child Tax Credit. If that's the case, then you should know not to expect your refund until late February at the earliest, as the IRS is required to withhold refunds for these credits to combat potential fraud. But otherwise, you could see your money within the first three weeks of February if you file your return on the earliest possible date.

Another reason to file early is if you expect to owe money on your taxes. Most Americans don't have much in the way of savings, and if your tax bill comes in higher than expected, you might struggle to come up with the cash to pay it off. But if you give yourself a couple of months to scrounge up the money, you stand a better chance of avoiding late payment penalties.

But here's why you shouldn't file early...

Though filing early can get you your refund sooner and save you some stress in repaying your tax debt, it's not always a good idea. Specifically, if you don't have the proper documentation in place, you're better off waiting on missing forms and statements than guessing at numbers and entering the wrong information on your return. Go that route, and you could easily end up getting targeted for an audit.

Furthermore, it's not worth filing early if doing so causes you to rush through the process. If you make a mistake on your return, it could end up getting rejected.

What if you're not ready by April 17?

Of course, it may be that despite valiant efforts, you don't manage to complete your tax return by April 17. If that's the case, then your best bet is to request a tax extension, which will grant you another six months to get it done.

The good news about a tax extension is that you don't need a compelling reason to get one. The bad news, however, is that an extension won't buy you more time to pay your tax debt. This means if you end up owing money on your taxes and don't pay that sum by April 17, you'll start to accrue interest and penalties even with an extension in place. Still, you'll avoid a late filing penalty, which can be much costlier than a late payment penalty.

Now that you're aware that taxes are due on April 17 this year, you can start working on them so that you're less frazzled and stressed down the line. And that's reason enough to get moving.