A surprising number of parents and their adult children are hesitant to discuss finances. And that could hurt them later on.

Why the hesitation? It could boil down to not wanting to broach a potentially uncomfortable topic. Or, it could be that most folks assume they have time to bring the matter up, and thus keep postponing that talk indefinitely. Either way, the fact that most families aren't discussing finances is a mistake that could come back to haunt them. 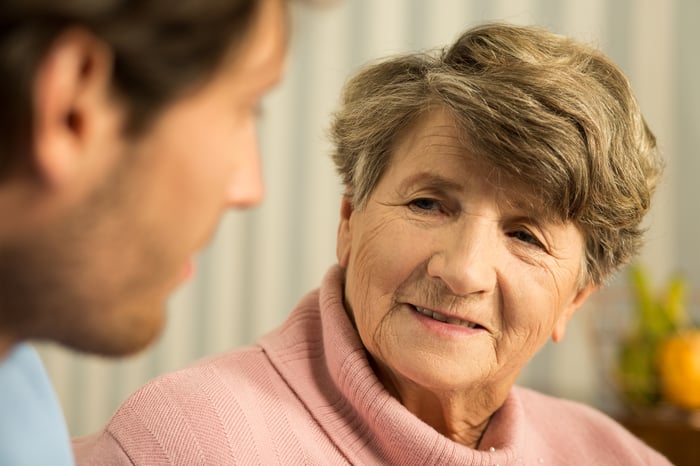 The need to talk about money

At first glance, it might seem unnecessary to discuss finances with your adult kids, or vice versa. But having these conversations today, while everyone is physically healthy, could help avoid some uncomfortable dialog down the line.

It's estimated that 40 million U.S. adults act as caregivers in some capacity. Of those, 30% have had to cut back on expenses to aid loved ones, while 40% of workers under 64 have made career sacrifices to become caregivers. That's one reason it's crucial for families to talk money -- or, more specifically, planning financially for long-term care.

A good 70% of Americans 65 and over wind up needing long-term care, and if you, as a senior, land in the same boat, there's a good chance your adult children might bear at least a portion of the burden. In fact, a big reason so many adults wind up becoming caregivers themselves is that they don't have the conversation early on and lay out expectations about who will pay for long-term care should the need arise.

But that's not the only reason families should be discussing money. One-third of adult children currently receive financial support from their parents, while 40% of adult children provide financial assistance to their parents. Clearly, either sort of reliance could end up putting an undue burden on the provider -- an onus that may be avoidable in the face of honesty.

Imagine, if you will, that you're currently giving your adult children $500 a month, but that it's coming at the expense of fully funding your IRA or 401(k). Your children might think that money is cash you can afford to part with, but if that's not the reality, you could end up putting your future and their future at risk -- namely, if they're then forced to unexpectedly support you in your old age.

Parents and adult kids are also misaligned when it comes to inheritances. Though 20% of children don't expect their parents to leave any behind money, only 7% of parents expect to completely exhaust their assets and leave nothing to their heirs. And while you could argue that it's better to get an unplanned windfall than bank on an inheritance that may not come to be, there's no reason not to weave such information into your long-term financial planning. But again, that requires an open conversation -- something most adults clearly aren't eager to have.

Getting money matters out in the open

If you've yet to talk money with your family, it's time to start rethinking that reluctance. If you're the parent of adult children, discussing financial matters with your kids could open the door to better money management on both your part -- especially if you're currently providing financial support you really can't afford. And if you're on the receiving end of such support, you might take steps to reexamine your budget and change your spending habits if you come to realize the money your parents are giving you is putting their retirement at risk.

The long-term care discussion is an important one, too, because while your parents might expect you to help foot the bill for a nursing home at some point in time, that may not align with your plans, or your financial capability. Similarly, if you think you'll eventually be put in a position to become a caregiver (say, if your parents aren't planning to buy long-term care insurance), it pays to talk about the financial and career-related implications up front, and work out an arrangement that best suits all parties involved. For example, if you have multiple siblings, you should all sit down together, with your parents, and discuss who will bear the burden of caregiving or helping to pay for a nursing home or home health aide.

The more open you are, as a family, about money matters, the less conflict and disappointment you're bound to encounter. So, have that conversation sooner rather than later, even if it is a bit awkward. You'll all be thankful for it down the line.