Please ensure Javascript is enabled for purposes of website accessibility
Log In Help Join The Motley Fool
Free Article Join Over 1 Million Premium Members And Get More In-Depth Stock Guidance and Research
By Maurie Backman - Feb 12, 2018 at 8:36AM

Each year, countless Americans bust their budgets in an effort to show their love. And it's time to put an end to the madness.

Each year, countless Americans shower their loved ones with cards, flowers, chocolates, and other such extravagant gifts. But if there's one day in particular where those displays of affection are taken to an almost gag-worthy extreme, it's Valentine's Day.

Valentine's Day costs the average American $136.57, according to the National Retail Federation. And consumers on a whole spend a total of:

Think that's going overboard? Then get a load of this: Not only do Americans make a habit of spoiling their significant others each Feb. 14, but an estimated 20% of consumers buy Valentine's Day gifts for their pets, too. 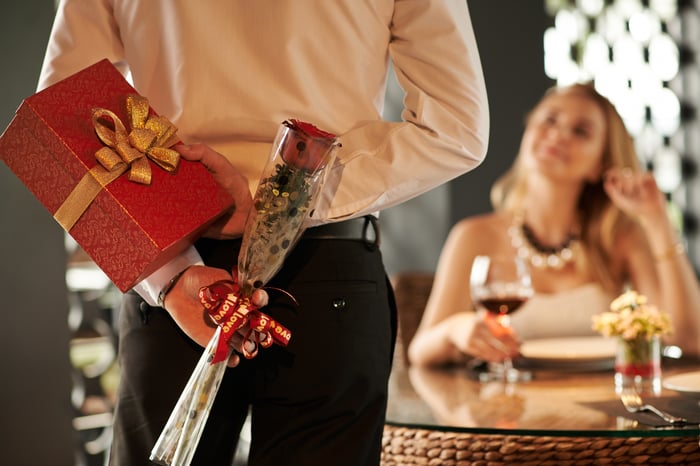 The problem, however, is that since most Americans are behind on savings, they really can't afford to be throwing money away on what's ultimately a well-meaning yet overtly commercialized occasion. And the fact that they're pressured to overspend is only going to make our collective savings crisis worse.

What will a single day cost you?

Whether you decide to go all-out on Valentine's Day or keep things relatively simple, you're still apt to spend more than you would on a regular old day. And that's a problem, because a large chunk of Americans struggle to keep up with their standard bills, which means they really can't afford to be spending anything extra on Valentine's Day, let alone $136 and change.

Consider this: A good 57% of Americans have less than $1,000 in the bank, which is well below what's considered an adequate emergency fund. As a general rule, you should always aim to have at least three months' worth of living expenses available in cash at all times. The fact that more than half of Americans aren't anywhere close is troubling in its own right.

But here's an even more disturbing statistic: 39% of Americans have no savings at all. And those are the folks who need to steer clear of the Valentine's Day hoopla to avoid racking up debt.

A day of credit card abuse?

Speaking of debt, Valentine's Day is likely to lead to it if you aren't careful. That's because it's the sort of day that's designed to be difficult to pull off on the cheap. Think about the restaurants in your neck of the woods. Chances are, they're offering a preset menu for the big day that's far more limited, and far more expensive, than their usual selections. Let your significant other pressure you into a blown-out meal, and you could easily find yourself on the hook for an extra $100 in credit card debt that you can't pay off.

The same applies to gifts, goodies, and whatever else it might take for you to hit that $136.57 threshold. And remember, that figure is just an average, which means there are plenty of folks who will inevitably spend more.

A better approach to Valentine's Day

There's nothing wrong with getting into the Valentine's Day spirit and surprising that special person in your life with a sweet note or small token gift. But don't go overboard on spending, especially if your finances are already on shaky ground. Rather than pay a premium for what will probably amount to a mediocre restaurant meal, whip up something delicious at home. Instead of jewelry, craft something meaningful, like a personalized mug that can be had at a fraction of the cost. And for the love of sugar, wait until the day after Valentine's Day to invest in a giant box of chocolates. Retailers tend to overstock for the holiday, and you'll likely score the same haul for 50% off if you wait 24 hours.

While Valentine's Day isn't supposed to be a source of financial upheaval, for countless Americans, it inevitably winds up being just that. So this year, take a smarter approach to the holiday. Set a budget in advance, and stick to it, even if it means skipping the roses and sipping champagne at home. At the end of the day, your significant other should appreciate the gesture. And remember: A heartfelt "I love you" is always free.