While retirement certainly brings about its share of unknowns, perhaps the most daunting prospect associated with this stage of life is the potential to run out of money. That fear is so widespread, in fact, that 60% of baby boomers are more worried about depleting their nest eggs prematurely than actually dying. Here are a few signs that you may be headed down that dangerous path.

As a general rule, we're supposed to be setting aside roughly 15% of our income each month for the future so that by the time we retire, we're left with about 10 times our ending salary. But countless older workers today are nowhere close to that goal. The average household aged 56 to 61 has just over $163,000 in savings, according to data from the Economic Policy Institute. But the average salary for Americans aged 55 to 64 is roughly $50,000 per year, according to the Bureau of Labor Statistics. This means that if you're a few years shy of retirement and your savings mimic the aforementioned numbers, you're quite potentially in trouble. 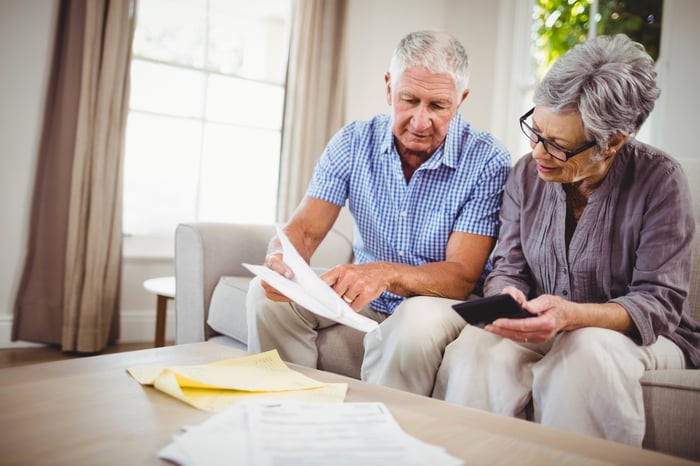 2. You're underestimating your expenses

Countless older workers expect their living costs to magically go down once they end their careers. But while certain expenses, like commuting, might go away, most of your bills, like housing, electricity, clothing, phone service, and food will stay the same. In fact, you may come to find that certain expenses go up in retirement -- particularly healthcare. Not only that, but nearly half of U.S. households spend more money during the early years of retirement than they did when they were still working, so don't make the mistake of assuming your bills will automatically shrink. If you do, there's a good chance you'll deplete your nest egg before you know it.

3. You're relying too much on Social Security

An estimated one-third of retired workers depend on Social Security to provide 90% or more of their income. And frankly, that's just unrealistic. Those benefits, in a best-case scenario, will replace roughly 40% of the average worker's pre-retirement income, but most seniors need double that amount to keep up with their bills. If you're assuming you'll mostly get by on Social Security, and can therefore manage with minimal savings, you're in for a rude awakening. Consider yourself warned.

Nobody wants to run out of money during what could be considered our most vulnerable time in life, so if the above signs tell you you're headed down that path, it's time to begin making changes. First, start ramping up your retirement savings rate. If you're already 50 or older, you get the option to contribute up to $24,500 per year to a 401(k) and $6,500 to an IRA. Max out the former for seven years, and you'll add another $205,000 to your nest egg, assuming your investments generate a somewhat conservative 6% average annual return during that time.

At the same time, you'll need to map out a retirement budget that outlines the costs you'll be facing. Your best bet is to do this a couple of years before your planned retirement date, because at that point you'll be most likely to know what expenses you're looking at. Don't forget to account for an uptick in medical spending, though -- especially since there are numerous services Medicare won't cover.

Finally, be realistic about Social Security, and know that your benefits are only meant to supplement your senior income, not constitute the bulk of it. That said, you can boost your monthly payments by holding off on benefits past full retirement age, and that increase will remain in effect for the rest of your life. And the more outside income you have, the less likely you'll be to blow through your savings too quickly.

Outliving one's savings is nothing short of a nightmare, so don't let it happen to you. Save more, budget appropriately, and be smart about Social Security. With any luck, your nest egg will be there for you throughout retirement -- however long it happens to be.

3 Reasons You Might Run Out of Money in Retirement, and What to Do About It @themotleyfool #stocks Next Article
Current