Though not all workers have access to a 401(k), those who get the option to participate in such a plan can reap a world of benefits. Not only is funding a 401(k) seamless, but thanks to the generous annual contribution limits that come with these plans, workers who participate also have a real opportunity to build sizable nest eggs.

But if there's one major drawback associated with 401(k)s, it's that their fees can be high. And not knowing what those fees entail can cost you in the long run.

Unfortunately, new data tells us that most Americans are completely in the dark about what they're paying in 401(k) fees. Roughly three-quarters of participants either think they don't pay any fees or don't know what those fees total, according to TD Ameritrade. 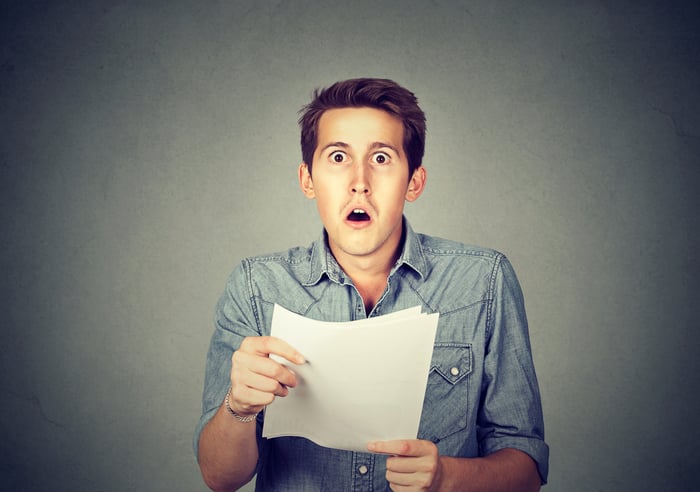 I'M PAYING HOW MUCH IN FEES? IMAGE SOURCE: GETTY IMAGES.

The problem, of course, is that not understanding those fees could shortchange your nest egg over time. And that's something you'll be sure to regret once retirement rolls around.

How much money will you lose in the long run?

Fees are frequently a side effect of investing, but that doesn't mean you shouldn't take steps to minimize them. Yet a huge percentage of Americans aren't doing that because they're clueless about their retirement plan fees in the first place.

Many 401(k) plans charge administrative fees equal to about 1% of their assets under management. Now at first glance, 1% may not seem like a lot. If you contribute the max this year for someone under 50, you'll lose $185, which isn't such an appalling number. But one thing you need to remember is that as your assets grow, that 1% can morph into a much more life-changing sum.

Imagine your account grows to $2 million toward the end of your career, and you lose 1% of that sum to fees. That's $20,000. Ouch. In fact, the average American worker who starts earning a median salary at age 25 is expected to lose a total of $138,336 in lifetime 401(k) fees. And that's a lot of cash to be missing in retirement.

Of course, it's not just administrative fees you'll pay with a 401(k); you'll also pay fees based on the specific investments you choose. And the more money you give up along the way, the less you'll have available to reinvest year after year and grow your wealth the way you want to.

Though navigating your 401(k)'s fees might seem insurmountable, if you're willing to put in the legwork, you can access all of the information you need to become a more informed saver. Your plan, by law, is required to disclose its administrative fees, so read through that documentation to get a sense of what you're dealing with. Similarly, each individual fund offered as an investment choice in your plan must share that information as well, so as you compare returns and performance, focus on those fees just as heavily.

Now one thing to keep in mind is that your plan's administrative fees are what they are -- but that doesn't mean you can't take steps to lower your investment fees. Generally, this boils down to opting for index funds over actively managed mutual funds, since your costs as an investor tend to be lower. Incidentally, you're statistically unlikely to lose out on returns by going this route, as studies have shown time and time again.

Furthermore, don't be shy about reaching out to your company and asking for 401(k) guidance. Many employers these days offer financial wellness programs that include having independent advisors come in and provide 401(k) checkups, so to speak. Meeting with such a person could help you narrow down the right investment choices and avoid some of the fees you might currently be paying.

Finally, when all else fails, don't be afraid to ditch your 401(k) and move your money into an IRA. This especially holds true if your plan's fees are higher than average and you can't find low-cost investments that align with your strategy and tolerance for risk.

You work hard to set money aside in your 401(k), so don't lose more of it than necessary. Get educated about the fees you're paying, and take steps to keep them as low as possible. Frankly, your retirement depends on it.