For years, financial experts have been tossing around the $1 million figure as an ideal retirement savings target. Whether that's a legitimate assessment or not is still up for debate, but I've personally made the case, with numbers to back myself up, that $1 million is a good number to aim for.

So let's assume that the countless financial people who talk up that $1 million figure are right. If that's the case, then today's older workers are facing a major retirement crisis, particularly since they're nowhere close to having $1 million in their nest eggs. 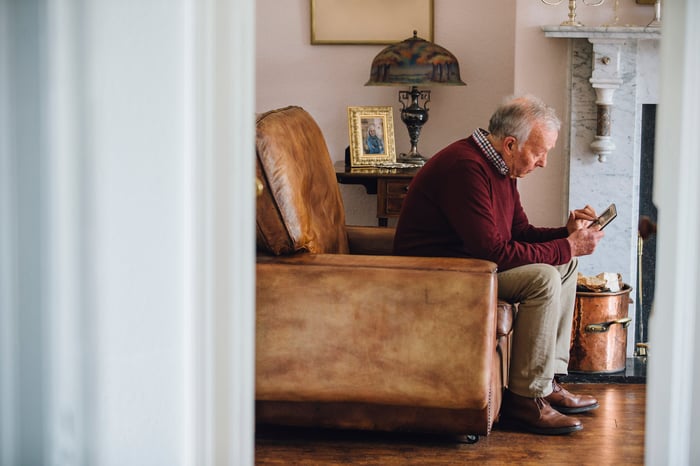 Now let's step back and assume that that $1 million is way off. Maybe we don't need nearly that much. Maybe $500,000 will suffice. Be that as it may, what I'll call a median savings balance of $123,000 among older Americans isn't nearly enough to retire on. And the sooner more people realize that, the better their chances of salvaging their golden years.

How much will retirement cost you?

The extent to which you spend money in retirement will depend heavily on your desired lifestyle and health. That said, the typical retiree today spends about $46,000 a year, or so reports the Bureau of Labor Statistics. Multiply that by 22 years, and you're looking at over $1 million. Of course, some of that money can come from Social Security, but since the average recipient today gets around $1,400 per month, or just under $17,000 in benefits per year, the need for strong savings is pretty clear.

Now let's revisit that $123,000 median savings among older Americans. If we apply a 4% annual withdrawal rate, which has long been the standard, we arrive at a yearly income of $4,920. Combine that with the average yearly Social Security benefit at present, and we get just under $22,000 -- less than half of what the typical senior spends annually right now.

You see? Older workers are in pretty bad shape.

But, there's some good news, particularly for those who still have some time ahead in the workforce. Folks who make an effort to ramp up their savings immediately have a shot at financial security down the line. Those who don't, however, risk joining the ranks of the 25 million seniors who are straddling or living well below the poverty line today.

Make the most of the rest of your career

If you're still plugging away at a job, you have a real opportunity to make up for lost time. Currently, 401(k)s max out at $24,500 a year for workers 50 and over. Hit that limit for 10 years, and you'll add around $338,000 to your nest egg, assuming your investments generate an average annual 7% return during that period.

Now if you're already in your late 60s or early 70s, there's a good chance you don't have many full-time working years to look toward. But that doesn't mean you can't work part-time to generate some income. If you're able to earn $100 a week, it'll go a long way toward covering your senior living expenses.

Another option, if it applies to you, is to hold off on filing for Social Security until you turn 70. For each year you delay benefits past full retirement age, which is 66, 67, or somewhere in between depending on your year of birth, you'll boost your payments by 8%. So let's take today's $1,400 average monthly benefit and assume that's what you'll be looking at come full retirement age. If you wait three years to claim Social Security and boost that figure by 24%, you'll come away with over $1,700 a month instead. That'll help pay the bills, too.

While you might manage to get by on well less than $1 million in retirement, most older Americans simply haven't saved enough to live comfortably once they stop working. If you're one of them, it's time to focus on socking away more cash and maximizing your Social Security payments. Otherwise, you'll risk struggling financially at the worst possible time.

If $1 Million Is the Magic Retirement Number, Most Older Americans Are Nowhere Close @themotleyfool #stocks Next Article
Current