If you've been making these particular excuses, stop -- and start doing better.

When it comes to retirement savings, countless workers are in pretty bad shape. An estimated 42% of Americans have less than $10,000 set aside for the future, according to data from GoBankingRates. Meanwhile, 22% of Americans aren't contributing to a retirement fund at all, as per Capital One's 2018 Financial Freedom Survey.

Of course, it's easy to make excuses for ignoring your future, so Capital One asked its survey participants why they weren't saving. Their top answers? Not earning enough money (41%), and counting on Social Security instead (18%). 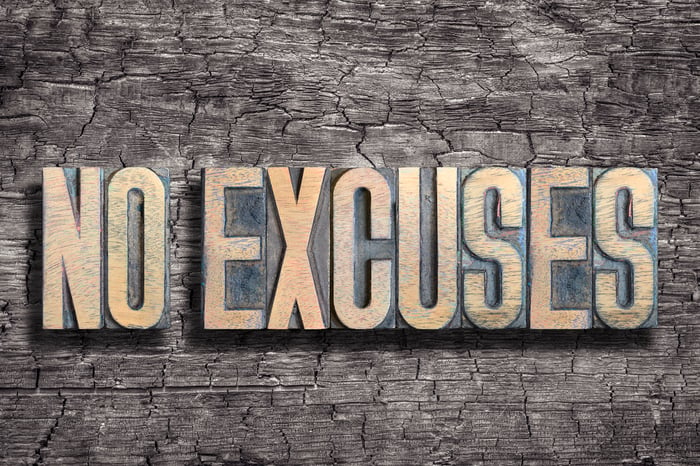 Not surprisingly, I'm here to tell you that these reasons are bogus. And the sooner we all stop piggybacking on these lame excuses, the less likely we'll be to retire broke.

You can save at any income level

It stands to reason that someone earning $100,000 a year will have an easier time saving money than someone bringing home $30,000. But the thing to realize is that if you budget accordingly and set priorities, you can save money for the future regardless of how much, or how little, you earn.

Think about the things you spend money on today. Chances are some of your bills aren't necessities, but rather, luxuries. I'm talking about things like your cable plan or the occasional restaurant meal you treat yourself to. Look, these aren't unreasonable indulgences, and if you can swing them while also managing to sock away a little bit of money each month for retirement, then keep up those habits. But if you're going to claim that your earnings leave no wiggle room for IRA or 401(k) contributions, then it's time to be more honest with yourself about what you're capable of saving.

Imagine you're spending $80 a month on cable and another $50 to eat out once a month. That's not a ton of money in theory. But if you were to take that $130 a month, save it, and invest it at a 7% average annual return, which is a couple of points below the stock market's average, you'd wind up with close to $150,000 over a 30-year period.

Now to be frank, $150,000 isn't a whole lot in the grand scheme of what could be a 20-year retirement or longer. But it's definitely better than nothing.

Many people neglect their retirement savings because their plan is to cut expenses during their senior years and use Social Security to pay the bills. The problem, however, is that you can only cut so many costs and still manage to live. You'll still need housing, food, transportation, clothing, and medical care -- and if you think the latter will go down in retirement, you're sorely mistaken.

That's precisely why falling back on Social Security alone is a bad idea. Those benefits will replace about 40% of the average earner's pre-retirement income, but most people need roughly double that amount to live comfortably. Even if you commit to an extremely frugal lifestyle when you're older, your chances of managing to live on just 40% of your former income are pretty slim.

If you're still not convinced, think about it this way: The average Social Security recipient today collects just over $1,400 a month, or a little less than $17,000 per year, in benefits. If you think that's enough to live on, then I suppose there's no real need to change your ways and start saving for the future. But if that $1,400 is what you currently spend on rent, transportation, and food alone, then you must rethink your approach to retirement and start stepping up on the savings front.

Saving for the future certainly isn't the most fun thing to do with your paycheck. But if you want a shot at a comfortable retirement, that's precisely what you'll need to do. And the sooner you realize that, the more opportunity you'll have to build a decent nest egg and enjoy your golden years rather than struggle through them.