Please ensure Javascript is enabled for purposes of website accessibility
Log In Help Join The Motley Fool
Free Article Join Over 1 Million Premium Members And Get More In-Depth Stock Guidance and Research
By Maurie Backman - May 20, 2018 at 7:18AM

Never make assumptions or ignore your investments. I did both of those things, and lost money in the process.

The year was 2009. I was buying a house, and, as such, had been saving aggressively for its down payment. Only once I had that in place was I willing to have a more substantial go at investing, and I decided I wanted to add some conservative investments to my portfolio to ease my way in. To me, that meant putting money in bonds, because after all, bonds are a safe investment, and stocks aren't, right?

This is a story of what happens when you make assumptions and don't keep tabs on your investments. With any luck, you'll learn from my mistake so that it doesn't end up happening to you.

My goal in investing, at least initially, was to minimize potential losses and generate some income from my portfolio, all without increasing my tax burden too heavily. To that end, municipal bonds seemed like the way to go, and back then, Puerto Rico was the place to invest in. With yields at or above 5%, the commonwealth's bonds offered a great opportunity to snag a predictable income stream the IRS wouldn't be able to get its hands on. I was in. 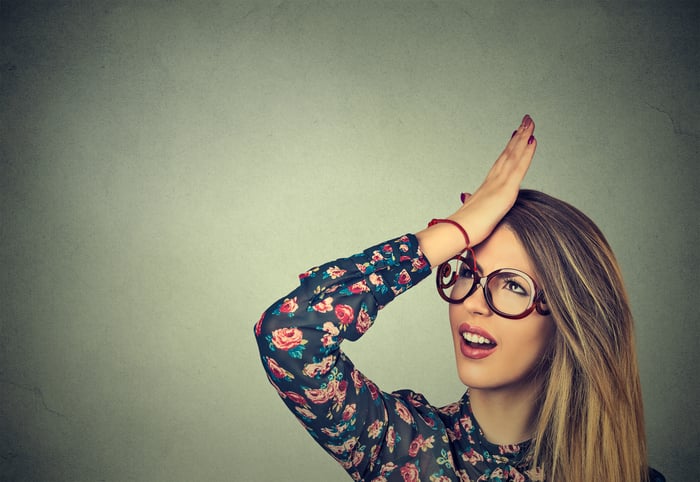 Like what on Earth was I thinking? Image source: Getty Images.

For several years, the bonds held steady, so I did nothing other than sit back and collect my interest payments.

But then things started to go south. Bond values started to fall as economic turmoil on the island caused investors to question their likelihood of getting repaid. My interest payments, however, continued to come in, so I didn't think much of it, nor did I really take the time to dig in. By then, I'd expanded my portfolio to include a wide range of stock investments, and frankly, I was so busy focusing on those that I pretty much neglected my bond holdings. Because bonds are safe, right? Wrong.

In 2014, Puerto Rico's bonds were downgraded to junk. And that's when I knew I was in trouble. But I held on, because selling my bonds at that point would've meant taking a major loss.

Then, in late 2015, Puerto Rico finally defaulted on its bonds, causing values to plummet as the island's then-governor acknowledged that the commonwealth's economy was truly in a "death spiral." Once again, I was stubborn and didn't sell, thinking that things couldn't get much worse and I might as well sit tight. In doing so, however, I lost the opportunity to put that money to work -- a sub-error of sorts in the grand scheme of my major blunder, but a mistake nonetheless.

I finally decided to cut my losses last year, unload those bonds for whatever I could get for them, and reinvest that cash. But make no mistake about it: I lost a sizable chunk of money, and all because I failed to better track what I thought was a safe investment.

Of course, with every failure in life comes a valuable lesson, which I learned the hard way so that you don't have to. First, there's no such thing as a risk-free investment. Bond issuers can start with strong ratings and get downgraded when their finances change, so don't buy into the assumption that you won't get hurt in the bond market. You can easily lose a fortune if you aren't careful.

Secondly, never neglect your investments. Aim to check up on them quarterly to see how they're faring and pay attention to news items that might trigger a red flag. I was so busy keeping track of my so-called risky stock portfolio that I failed to notice that my bonds were rapidly declining in value. By the time I realized how dire the situation was in Puerto Rico, it was too late to recover the bulk of the principal I'd invested. Then, in a true act of stubbornness, I hung onto those bonds thinking I'd ride out the storm and see what would happen, all the while leaving my money tied up doing nothing.

That said, taking a major loss worked out for me to some extent. Because the market did so well last year, I was able to use my whopping loss to offset a large amount of gains, thereby helping myself from a tax perspective. Furthermore, I was able to carry part of that loss forward into the current tax year, which buys me some flexibility at present to play around with my investments.

Still, lesson learned: Never, ever make assumptions about an investment, and always keep up with your entire portfolio. As someone who does what I do for a living, I absolutely should've known better. But sometimes you need to live it to learn it, and now that I've lived it, you can avoid falling victim to the same fate.