At last count, nearly 62.4 million people received Social Security benefits. The program pays out close to $1 trillion annually in benefits, and although the bulk of that total goes to retired workers, there's a host of different benefits available to workers and their family members both in retirement and during the earlier part of their lives.

The typical American receiving Social Security gets an average monthly benefit of $1,294, according to the Social Security Administration. But the benefit amounts can vary widely depending on the type of benefit you're talking about, as different rules apply for various categories of people entitled to receive financial assistance from Social Security.

The most common Social Security benefits

The vast majority of people getting Social Security are retired workers claiming benefits on their own work histories. Because of the demographic shift in recent decades toward two-earner families, it's increasingly common among married couples for both spouses to collect their own benefits.

Even when there's an earnings disparity between two spouses, the progressive nature of the formula that determines monthly Social Security benefits often makes a worker's own retirement benefit worth more than the spousal benefit based on the work record of the person's spouse. That's largely because the spousal benefit is typically one-half of the worker benefit. In fact, you can see that dynamic in the averages above, because the typical spousal benefit of is just over half what the typical retired worker makes. 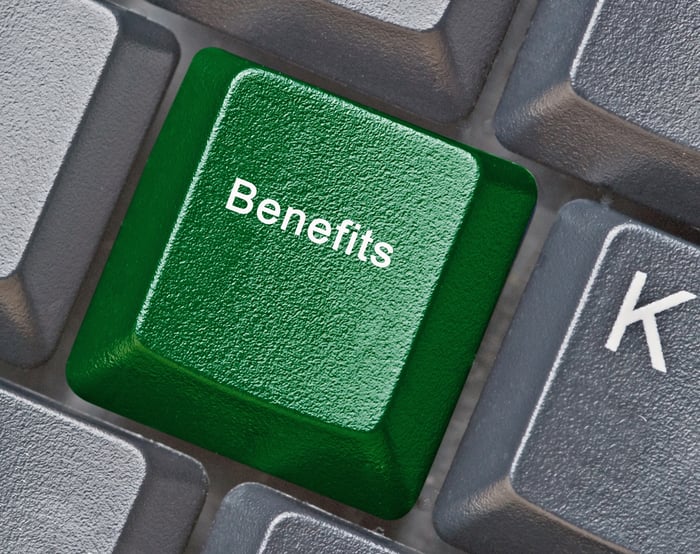 The next two biggest categories are disabled worker benefits and survivor benefits. Disability benefits tend to be slightly lower than retirement benefits, and that's due in part to the way that Social Security calculates the benefit amount for those who are disabled.

The SSA doesn't require a 35-year work history for disability benefits, as that would lead to young workers who are disabled early in their careers getting next to nothing from the program. Yet even with that as a given, most workers tend to have their highest earnings late in their careers, so missing out on those years due to an earlier disability skews earnings enough to result in lower benefits. For the families of disabled workers, the fact that more children of younger disabled workers will be young enough to be eligible for children's benefits goes a long way toward explaining the low payouts there, because family maximum benefit limitations often require larger numbers of children to share a maximum benefit rather than earning what would otherwise be the full amount.

It also should come as little surprise to see that surviving spouses get an amount that's very close to what retired workers get. In general, surviving spouses are entitled to survivor benefits that are equal to the benefit that their deceased spouses had earned, adjusted for the age at which the survivor chooses to claim those benefits. Children's amounts are lower, as they're entitled to just 75% of the worker's benefit as a survivor benefit, and family maximums can end up reducing their benefits, as well.

Make the most of your Social Security benefits

Just because the average American earns the amounts above from Social Security doesn't mean you can't do better. There are several ways you can boost your benefit entitlement:

Social Security helps tens of millions of Americans, and the money it provides is vital to their financial stability. Understanding the basics of how Social Security benefits work is important if you want to get as much as you can from the program throughout your lifetime.