We all have a tendency to spend money on luxuries, whether it's a weekend getaway or a mid-afternoon latte. But new data from Bankrate tells us that America's lowest earners spend the highest percentage of their income on so-called financial vices. Specifically, households earning less than $30,000 a year spend an estimated 13% of their annual income on things like lottery tickets and prepared meals and beverages. Meanwhile, the country's highest earners -- those with an income of $75,000 or more -- spend just 2.6% of their money on similar treats.

Now let's be clear: There's nothing wrong with indulging in luxuries from time to time or even regularly when doing so isn't hurting us financially or thwarting our savings efforts. But given that 40% of U.S. adults aren't equipped to cover a $400 emergency, this news should serve as a serious wakeup call for the many Americans who can't afford to be spending so much of their limited income on things that are ultimately unnecessary. 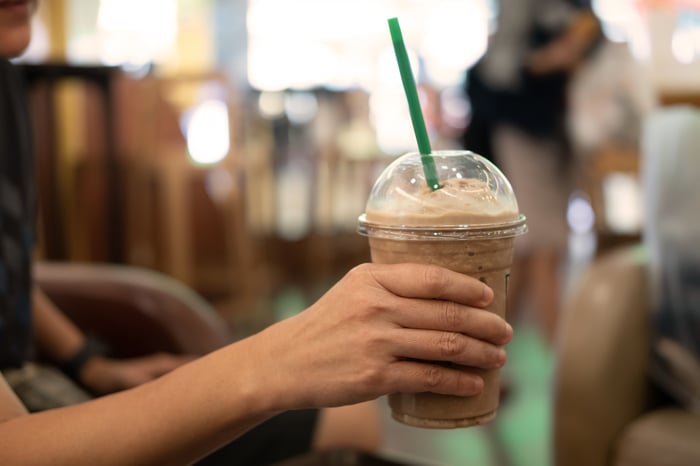 Are your spending habits destroying your finances?

The average American purchases takeout or restaurant food 2.4 times a week, buys 2.5 prepared beverages (like smoothies or coffee) a week, and spends $17 a week on lottery tickets. All told, Americans fork over an average of $2,944 a year for these "wants." But while it's one thing to enjoy the occasional indulgence or to spend money on luxuries when it only eats up a negligible percentage of your income, it's another thing to spend a whopping 13% of your earnings on things you can do without.

Let's imagine you're a lower earner and have no emergency savings on hand. This means that the moment you encounter an unplanned bill, you'll probably have no choice but to rack up debt to cover it, thereby kick-starting a cycle in which interest accrues against you and you dig yourself deeper into a financial hole by the day.

Now let's also imagine that you're currently spending $50 a week on store-bought lunches instead of packing food to eat at work. Since restaurants typically charge a 400% markup, you're effectively overpaying by $37.50 on a weekly basis -- meaning you could prepare the same items, more or less, for just $12.50 a week in your own kitchen. Therefore, if you decide to start brown-bagging it and pocket that $37.50 a week instead, you'll have $1,950 in a year's time. And that's a nice cushion for protection from life's unforeseen expenses.

Even if you aren't a particularly low earner, it still pays to take a closer look at your spending habits and see how they might be impeding some of your other financial goals. Imagine you're currently spending $2,944 a year on the aforementioned vices like the typical American. If you're doing well on emergency savings and that habit isn't driving you into debt, it may not seem like a big deal. But think about your retirement nest egg. Could it use a little more money? If so, cutting that figure in half and banking $1,472 a year will leave you with an extra $139,000 for retirement over a 30-year period, assuming your investments deliver an average annual 7% return during that time.

Of course, this isn't to say that you shouldn't live a little and treat yourself to the things that make you happy. But if your finances are lacking in any area, you should do so sparingly until you're in a better place money-wise. Otherwise, you risk damaging your finances on a long-term basis, and all for a little instant gratification you can probably learn to live without.