Please ensure Javascript is enabled for purposes of website accessibility
Log In Help Join The Motley Fool
Free Article Join Over 1 Million Premium Members And Get More In-Depth Stock Guidance and Research
By Maurie Backman - Sep 22, 2018 at 7:18AM

Countless folks lose sleep over one key concern that we all have the power to mitigate.

When it comes to money matters, Americans have plenty to be concerned about. A large number of U.S. adults are behind on emergency savings, and many wonder whether they'll ever manage to afford a home of their own. But if you want to know what tops Americans' list of financial worries, it's the idea of never being able to retire and having to work for the rest of their lives. That's the latest from Prudential Financial, which heavily attributes this concern to workers' glaring lack of savings.

Still, feeling like you'll never retire is quite the morale-zapping notion to walk around with. If that's what you're thinking, then here are some steps you can take to alleviate this major worry. 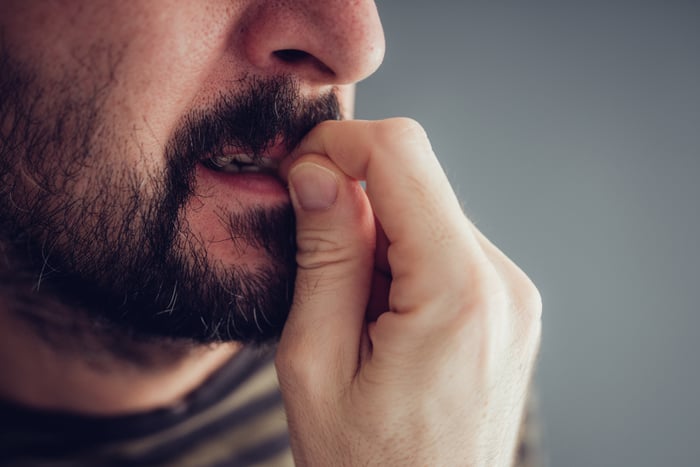 1. Make up for lost time

Maybe you've fallen down on retirement savings thus far, but as long as you still have a chunk of working years ahead of you, you have a real opportunity to make up for your previously poor habits. Currently, workers under 50 can contribute up to $18,500 a year to a 401(k) and $5,500 to an IRA. Those 50 and over, meanwhile, get a catch-up provision that raises these limits to $24,500 and $6,500, respectively.

Now imagine you're 50 years old with no retirement savings -- that paints a pretty bleak picture. But if you begin maxing out a 401(k) effective immediately at $24,500 per year and continue doing so for 20 years, you'll have $1 million to your name by the time you turn 70, assuming your investments are able to generate an average annual 7% return during that time.

Of course, this is just one scenario, but the point is that if you're eligible for catch-up contributions, do what you can to make them. If you're too young, hit the regular annual max on your retirement plan. And if you can't do that, commit to saving at a higher rate than you were before.

Saving as much money as you can, as early as you can, will increase your chances of having enough cash reserves to retire and live comfortably. But there's more to a secure retirement than sticking money in an IRA or 401(k) -- you'll also need to invest somewhat aggressively if you want your savings to grow.

In the above example, we saw that saving $24,500 a year for 20 years would result in a $1 million ending balance provided that account earned 7% per year. Well, 7% is actually a bit below the stock market's average, which means that if you go heavy on stocks, it's a reasonable benchmark to work with. On the other hand, if you were to play it safe and stick with bonds, you'd probably average closer to a 3% return, leaving you with just $658,000, all other things being equal. Of course, $658,000 is a respectable sum to retire with, but having over $340,000 more could buy you a ton of added financial flexibility in the future.

Americans are living longer these days, which means workers need to step up their savings game to allow for the fact that they might make it well into their 90s. But while putting away more money each year will make a difference, an even more effective means of boosting your nest egg is to put in a little extra time in the workforce. Doing so achieves several purposes -- namely, it allows you to keep contributing to a retirement plan, all the while leaving your existing savings alone for longer. And that's reason enough to keep plugging away as long as you're physically able to.

4. Change your perception of retirement

Many people think of retirement as a period during which work should be outright banned. But if you're willing to adjust your line of thinking and be open to the idea of working in some capacity, it'll ease some of the concerns that may be monopolizing your thoughts today.

Retirement is actually a great time to start a business or turn a hobby you enjoy into a money-making venture. This way, you have a solid means of occupying your time, and you get to earn money on your own terms, as opposed to having a clock to punch and a boss to answer to. Just as important, working in retirement is a good way to protect yourself against market downturns that can compromise your nest egg's lasting power. If you're earning enough of an income as a senior, you might manage to avoid dipping into your savings when your portfolio value drops, thereby evading losses in the process.

It's natural to worry about affording retirement, but if you make an effort to save consistently, invest aggressively, and work a bit longer than planned, there's a good chance you'll manage to exit the workforce when you want to. At the same time, be open to the idea of working as a senior, because it might spell the difference between retiring at a reasonable point in your life or feeling like you'll be trapped in your current job forever.