Though retirement is an exciting period of life, it can also be stressful -- especially from a financial perspective. Think about it: You're suddenly going from earning a paycheck to living on a fixed amount each month from Social Security and savings. That's a scary prospect. But by not making these major mistakes, you can avoid the financial worries so many seniors come to face.

Many people think they can get away with not following a budget, during their working years as well as in retirement. But once you move over to a fixed income, knowing where your money is going becomes all the more crucial. 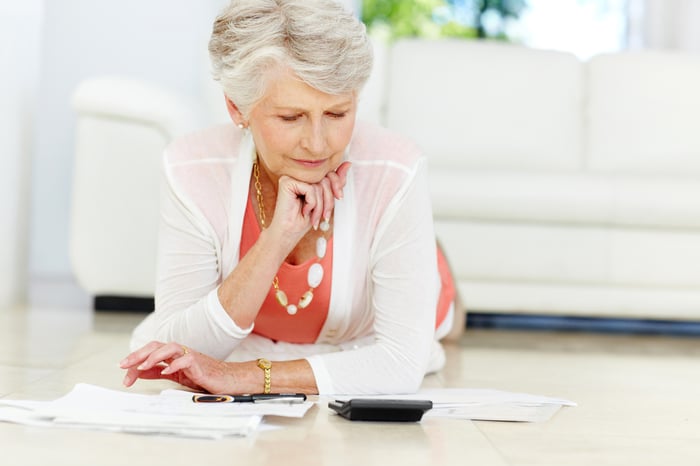 If you're not used to following a budget, change your tune when you retire. Map out a list of your recurring expenses, factor in one-time expenses (like annual subscriptions or membership dues), and compare that to the monthly income you have to work with. Keep in mind that the money you withdraw from savings isn't necessarily free of taxes. Unless you're stashing that money into a Roth account, you'll lose a chunk of your distributions to the IRS.

Now, if you find that your monthly income is enough to cover your ongoing expenses, you're in pretty good shape. Still, there should be a touch of wiggle room in your budget for unplanned bills. So if it's not there, play around with some of your spending categories. You might, for example, dine out a bit less frequently or get a less expensive car to free up a little money. Either way, make sure you understand exactly where your income is going so you can make the most of it and, just as important, make sure you're not overspending.

2. Relying too heavily on Social Security

Many people assume that they don't need much in the way of retirement savings because Social Security will cover the bulk of their living expenses. In reality, Social Security will only replace about 40% of the average earner's pre-retirement income. Most folks, however, need roughly double that amount to live comfortably in retirement. Therefore, if you don't have a lot in your IRA or 401(k), consider postponing retirement and extending your career until you have a better cushion.

Incidentally, working longer could end up boosting your Social Security benefits as well, thereby increasing that income stream. For each year you delay benefits past your full retirement age (which, depending on when you were born, is either 66, 67, or somewhere in between), you'll get an automatic 8% increase per year, until age 70. And that raise will remain in effect for the rest of your life.

Many folks assume they don't need long-term care insurance, or that they can't afford it, but unfortunately, 70% of seniors 65 and over will end up requiring some type of long-term care in their lifetime. And that care won't come cheap. The average assisted-living facility in the U.S. costs $45,000 a year at present, while the average nursing home costs $85,775 a year for a shared room and $97,455 a year for a private one. And that's a lot of money later in life, when your income is relatively fixed.

That's why it's wise to secure long-term care insurance before you find yourself in a situation that could upend your finances permanently. Though premiums don't tend to come cheap, if you apply for coverage in your 50s, when you're relatively young, you stand a better chance of scoring a health-based discount that will make paying for your policy more manageable.

The smarter you are about planning for and managing your expenses during retirement, the less stress you'll encounter. Avoid these mistakes, and you'll be on the path to a fulfilling, worry-free retirement.