We're told time and time again how important it is to have money on hand for emergencies, yet an alarming number of not-quite-old-but-certainly-far-from-young Americans seem to have missed the memo. A frightening 37% of adults aged 35 to 44 have absolutely no money in a savings account, according to new data from GOBankingRates. And if they don't get their act together soon, they risk damaging their finances beyond repair.

Why are 30- and 40-somethings struggling to save?

You'd think adults in their mid- to late-30s through mid-40s would have a relatively easy time socking away some money in the bank. After all, these folks are well past the stage of entry-level salaries at work, and many have conceivably had enough time to pay off their student loans. Yet a large number of Americans in their 30s and 40s continue to live paycheck to paycheck, maxing out their earnings on living expenses and having nothing left over at the end of each month to show for it. 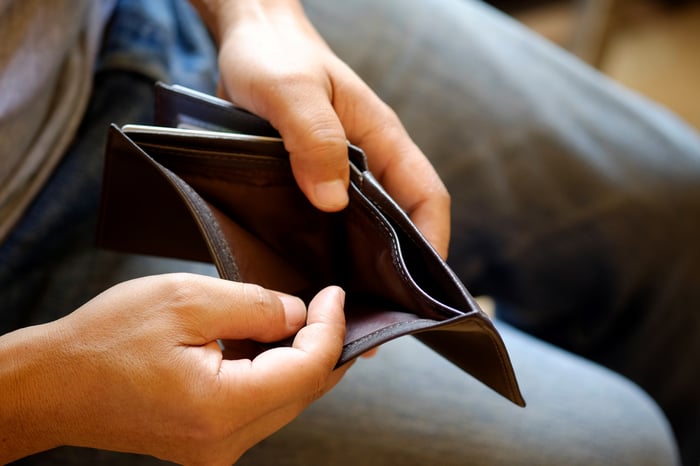 The problem, of course, is that in failing to save even a modest amount of money, these same people put themselves at risk of racking up serious debt the next time an unplanned expense comes their way. Those without savings often have no choice but to resort to credit card debt when unanticipated bills arise, thereby kick-starting a vicious cycle of accumulating interest and credit score damage. It's a terrible situation to be in, and one that a healthy savings account can help you avoid.

It's pretty much unacceptable for any adult to have $0 in savings, but when you're a decade or two into your career, it's even more troubling. So if you're without a dime in the bank, take a look at your budget, or create one if you're not using one yet, and see where all of your money is going. Chances are, you'll find at least one or two expenses you can cut back on without completely altering your lifestyle, such as lowering your cable plan or dining out less frequently.

That said, while small changes can make a difference in building savings over time, if you really have no money to your name, you'll need to do better, and that probably means cutting at least one major expense -- by, say, moving to a less expensive home or driving a less expensive vehicle with fewer frills.

Will those changes impact your quality of life? No doubt. But guess what? Getting slapped with a major unplanned expense and landing in credit card debt will have the same effect. So rather than sit around waiting for that to happen, take control of your finances by proactively making at least one major sacrifice. You don't have to do so for the rest of your life -- just long enough to build a healthy savings cushion.

How much should you aim to sock away? Ideally, you should have an emergency fund with at least three months' worth of living expenses, but if you can get closer to the six-month mark, even better.

Want to accelerate your savings? Get a side hustle. Working a second gig for even a few hours each week could put several hundred extra dollars in your pocket every month. And since that cash won't already be earmarked for other things, you should have no problem sticking it directly into the bank.

We all need savings, no matter our age. If you're starting with nothing, take steps to ramp up immediately -- before a financial emergency strikes and you're left scrambling to pick up the pieces.

When It Comes to Savings, 30- and 40-Somethings Need a Wake-Up Call @themotleyfool #stocks Next Article
Current