Please ensure Javascript is enabled for purposes of website accessibility
Log In Help Join The Motley Fool
Free Article Join Over 1 Million Premium Members And Get More In-Depth Stock Guidance and Research
By Maurie Backman – Nov 1, 2018 at 7:03AM

Even if you're already a pretty good boss, there's probably room for improvement.

When we think about the different things that workers tend to complain about, bosses tend to top the list. But new data from staffing service OfficeTeam tells us that apparently, there are a lot of great managers out there, because 80% of employees are happy with their bosses. On the other hand, 20% of managers clearly need to do better. Here are some ways you can improve as a boss:

1. Be a good listener

A strong leader is someone who knows not only how to guide others, but also how to hear them out. If you want to do better as a boss, learn to really listen to the people around you -- especially those who work for you. Be mindful of the challenges your team faces, and do your part to help your employees overcome them. 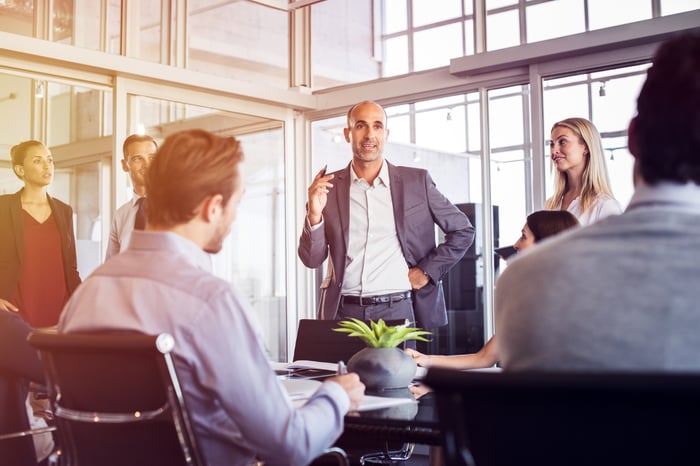 Nobody likes working for too smooth a talker. If you're not honest with your employees, they won't trust or respect you. So quit throwing around annoying buzzwords and instead talk straight from now on. If there's bad company news emerging, don't sugarcoat it. If raises aren't possible this year, don't beat around the bush. The more open you are with your team members, the more highly they'll regard you.

3. Give your workers some breathing room

As a boss, you're responsible for overseeing the many details involved in your team's performance. But if you get so caught up in those details that you feel the need to be involved in every single one, you're more likely than not to alienate your employees. In fact, 23% of workers consider their bosses to be micromanagers, which is not a positive quality. If you're guilty of it, step back and exercise some trust -- especially with those employees who have been on the job a long time and have a proven track record of getting things done.

4. Be generous with praise

Sometimes, even the most confident workers have moments of self-doubt. So it never hurts to be forthcoming with praise. By the same token, give thanks when it's due. People like being acknowledged and appreciated, and in a workplace, it can go a long way.

As the boss, you're in charge. But that doesn't mean you need to act like a drill sergeant all the time. It pays to focus on teaching your workers how to do their jobs (or how to do them better) rather than just telling them what to do all the time. Remember, you probably got to be the boss because you have the most industry knowledge and expertise, so what better way to showcase that than by guiding others to excel?

Most bosses are busy people, and between meetings, paperwork, and projects of your own, you're probably booked solid much of the time. But tough as it might be to squeeze in some extra time for your employees, it's pivotal that you make that effort. Being available to your team sends the message that you care, and that's the right message to send.

Being a good boss often boils down to treating your employees the way you'd like to be treated yourself. Even if you have a pretty good reputation as a manager so far, it never hurts to keep striving to do better. Your workers will appreciate it, and your career will move forward because of it.