Please ensure Javascript is enabled for purposes of website accessibility
Log In Help Join The Motley Fool
Free Article Join Over 1 Million Premium Members And Get More In-Depth Stock Guidance and Research
By Maurie Backman – Dec 6, 2018 at 6:04AM

And if you're one of them, consider this your wake-up call.

The news on the job front has been overwhelmingly positive in recent months, with unemployment at a low and work opportunities abounding left and right. But despite these solid economic conditions, working Americans still are struggling to save adequately for retirement. Two-thirds of U.S. households have less than $100,000 set aside for their golden years, according to data from the CFP Board, while only 45% think their nest eggs will last throughout retirement.

If your retirement plan is underfunded thus far or you're worried your savings won't be enough to sustain you once you stop working, there are steps you can take today to improve your long-term financial picture. Here are a few to act on. 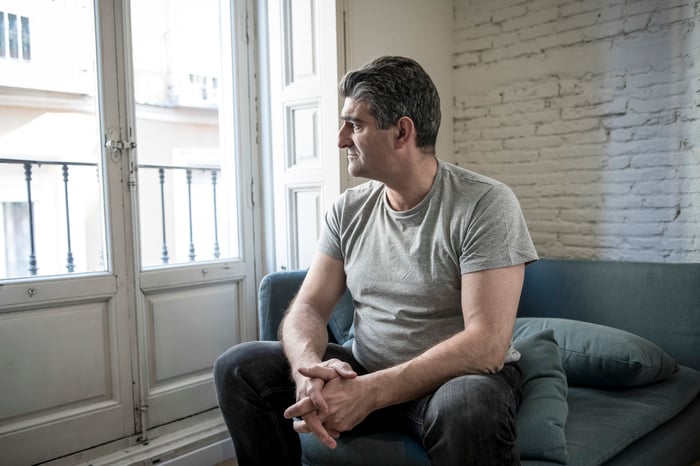 To save more for retirement, you'll need to give up more at present. There's really no way around that. But if you want to enjoy your senior years as opposed to struggling through them, you'll need to prepare to make lifestyle changes that work to free up cash. So take a look at your budget or create one if you don't have one already, and make enough substantial changes that allow you to ramp up your retirement plan contributions.

You might, for example, choose to downsize your living space and pocket $500 a month in the process. Or you might keep your home but get rid of a vehicle and cancel cable, thereby saving yourself a similar amount. The choice is yours, but don't just say you'll cut out your beloved morning latte twice a week and think that'll do the trick. Sure, saving $10 extra a week, or $40 a month, is better than nothing, but if you're behind on savings, you'll need to think bigger if you truly want to catch up.

Maybe your goal is to retire at 65 when Medicare eligibility kicks in. Or maybe you're aiming to reach full retirement age for Social Security purposes, which is either 66, 67, or somewhere in between, depending on the year you were born, and retire immediately thereafter.

Eager as you might be to leave the workforce as soon as possible, if you're lacking in the savings department, extending your career is one of the most effective ways to catch up and secure a greater income stream for retirement. Beginning in 2019, workers aged 50 and over will be allowed to contribute up to $7,000 a year to an IRA and $25,000 to a 401(k).

Now let's say you were planning to retire at 66 but choose to work another four years instead. Let's also assume you have $100,000 in savings and are able to max out a 401(k) for those four years. If your investments deliver a conservative 3% return during that time, you'll end up with $217,000 -- more than twice the amount you started with.

Working longer also can help boost your Social Security benefits. For each year you hold off on filing past your full retirement age, you'll accrue credits that increase your benefits by 8% per year, up until age 70. So let's say you're entitled to a $1,500 monthly benefit at a full retirement age of 66. Waiting until 70 to file would boost each payment to $1,980 -- for life.

When you work full-time, the idea of spending your evenings and weekends plugging away is hardly appealing. But if you're behind on retirement savings, a good way to catch up is to get yourself a side hustle. That second gig can be something you enjoy or something you don't particularly love but are good at, like tax preparation or bookkeeping. It really doesn't matter what you do as long as you're able to generate some extra cash for your IRA or 401(k).

Remember, the beauty of a side hustle is that the money you earn from it won't already be earmarked for existing bills. As such, you should have no problem sticking your earnings directly into your retirement plan of choice. And if you go this route, you'll be in good company, since 14% of Americans with second jobs do that extra work for the express purpose of being able to save for the future.

If you're not confident about your nest egg's lasting power, don't retire on financially shaky ground. Instead, take steps to boost your savings before you end your career. This way, you'll be better positioned to enjoy retirement to the fullest, all the while avoiding much of the financial stress unprepared seniors inevitably face.