Hint: It's not something you wrap.

Americans have a tendency to overspend during the holidays, which explains why the typical consumer wound up $1,054 in the hole last year. But while gifts, travel, and party food can easily add up, there's one additional expense you might feel compelled to tackle during the holiday season: home improvements.

An estimated 30% of Americans plan on making home improvements in time for the holidays, according to data from Mr. Cooper. Not only that, but the typical homeowner's budget for improvements is close to $6,000, or roughly 10 times the amount most Americans plan to spend on gifts.

Of course, it's understandable to want your home in top shape at a time when people are likely to be visiting for holiday celebrations, parties, and gift exchanges. But before you sink money into those renovations, think about whether now's really the right time to do so. 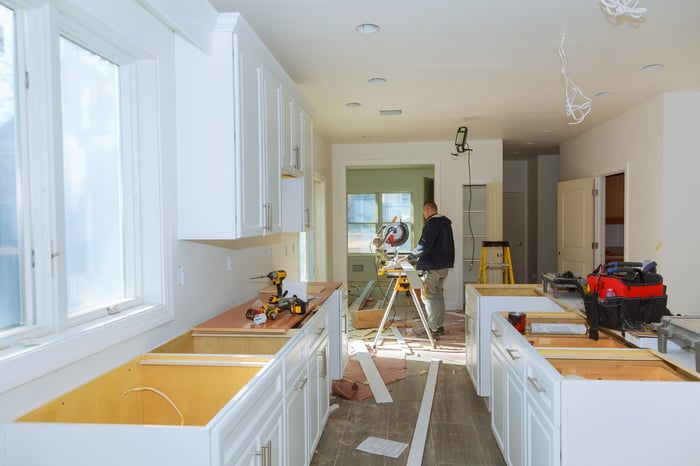 The most expensive time of the year

There's nothing wrong with spending some money on home improvements -- provided you have it. But given the number of Americans who are behind on savings and risk racking up debt for regular holiday purchases, it stands to reason that now may not be the optimal time to think about making home upgrades. In fact, in the aforementioned report, 25% of consumers say they expect to go into some sort of debt to cover their holiday gifts alone. Therefore, racking up $6,000 in the form of home improvements doesn't seem prudent, especially at a time when expenses tend to be at a high.

A better bet? Hold off on those home improvements until you see where you stand financially after the holidays. If you manage to emerge debt-free and perhaps receive a performance bonus at work or a raise, then you can use that extra cash to cover some or all of those home projects, thereby minimizing debt in that arena. Similarly, you never know when a generous family member might shower you with a sizable check as your holiday gift, thereby helping you cover that home improvement work. But for now, it probably pays to be patient and avoid a whopping expense that isn't actually a necessity.

Another thing to keep in mind is that contractors tend to be busy during the holidays, whether with work or their own family obligations. As such, you might pay a premium to schedule a last-minute renovation project, whereas you might pull it off at a much lower cost by waiting until the new year.

Of course, this isn't to say that you can't improve your home on a budget in time for holiday guests to see it. A fresh coat of paint can cost less than $40 if you do it yourself, and it's a great way to spruce up a room and give it a new look. Refacing your kitchen and bathroom cabinets might also be far more cost-effective than replacing them completely, so that's something to consider if you're looking to overhaul those rooms.

Either way, examine your finances closely before spending a bundle on home improvements. And if making those changes means taking on debt, consider waiting until you've saved enough to pay for them outright. The less debt you rack up, whether from gifting or renovating, the better off you'll be financially, so unless you've got a sinking bathtub, a crumbling living room wall, or a kitchen with a busted oven, you can probably manage to hold off.