Please ensure Javascript is enabled for purposes of website accessibility
Free Article Join Over 1 Million Premium Members And Get More In-Depth Stock Guidance and Research
By Maurie Backman - Dec 9, 2018 at 9:49AM

When being generous, don't forget yourself.

It's no secret that the holidays can be a very expensive time of year, especially when we factor in the cost of parties, travel, and gifts for friends and loved ones. It's the latter that might really cause a lot of folks a world of financial hurt this season. That's because 21% of Americans plan to spend more than $1,000 on holiday gifts this year, according to a new report by TD Ameritrade.

On the one hand, spending $1,000 in total might not seem so bad, especially when it is a result of generosity. On the other hand, most Americans can't afford it. An estimated 58% of U.S. adults have less than $1,000 in savings -- and they risk racking up debt to cover their holiday purchases. Furthermore, 33% of Americans have less than $5,000 in retirement savings, while 21% have no nest egg at all. 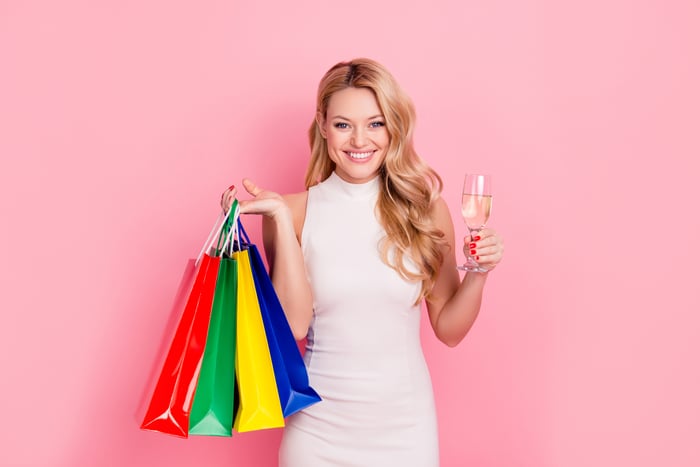 The takeaway? There's a good chance there are more important uses for your money than a truckload of gifts, so it pays to rethink your approach to holiday spending before you wind up going overboard.

How much can you afford to spend on gifts this year?

It's nice to want to shower the important people in your life with gifts galore, but if you don't have enough savings or leftover income from your paycheck to cover those purchases, you're going to land in credit card debt. And if you're not worried about racking up a modest balance because you think you'll pay it off quickly, consider this: A good 15% of Americans are still paying off last year's holiday debt. Charge up a storm and you might kick-start a dangerous cycle that haunts you for years to come.

But even if you do manage to scrounge up the money to cover your holiday purchases, before you rack up a $1,000 tab, ask yourself whether you should be spending that kind of cash on gifts when your finances are lacking in other areas. For example, if you have less than $1,000 in your emergency fund, you should really think about boosting your cash reserves before spending a small fortune on well-intentioned but technically unnecessary gifts for other people.

After all, think about what would happen if you lost your job or encountered a costly car or home repair. You'd be really stuck. On the other hand, if you were to spend $500 on gifts this year and stick the remaining $500 in the bank, you'd have more of a cushion.

Of course, if you're doing well on emergency savings, are on track for retirement, and have the money to buy $1,000 worth of gifts without risking debt, then by all means, shop away and be as generous as you'd like. Just don't get so caught up in the holiday spirit that you compromise your own finances in the process.