Talk about a backward leap.

Most people grapple with low salaries when they first kick off their careers. But a new study from the Federal Reserve Board of Governors reveals that millennial men now are earning $6,600 less, on average, than similarly aged men were earning 40 years back.

Why the downward shift? It seems like millennials are suffering the aftereffects of the Great Recession, says the aforementioned study. Unfortunately, that's hardly a consolation for the many young workers who are struggling to keep up with ever-growing housing costs, student loans, and the various bills adults of all ages are forced to contend with. 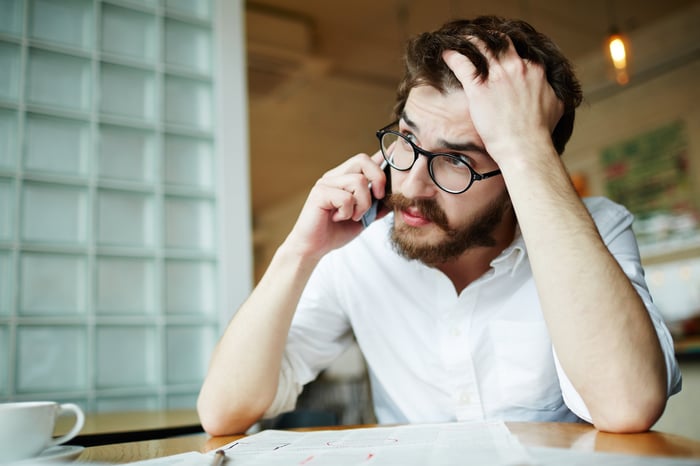 If you're a self-proclaimed victim of sluggish wages, there are steps you can take to make the most of your limited earnings. At the same time, you shouldn't hesitate to make the case for a higher salary if you deserve it.

It stands to reason that the less money you earn, the tougher it'll be to keep up with your bills. But there are a few things you can do to stretch your limited income when you're first starting out in the workforce. For one thing, follow a budget. It'll help you keep track of your spending and make it easier to cut corners, when necessary. Additionally, keep your fixed expenses as low as possible. These include your rent or mortgage payment, car payment, and cable bill.

Don't ignore your variable costs, either. Expenses like leisure and dining out can really zap your funds if you aren't careful, so if your earnings aren't that generous, limit yourself to one restaurant meal per week, and strive to brown-bag it rather than pay a premium for store-bought lunch every day.

Another way to maximize a relatively low paycheck? Consider moving back home after college to save money on rent and utilities. If you're able to live at home rent-free for a few years, you might manage to pay off your student loans and start banking some money so that you have more flexibility once you decide to live on your own.

You should always make a point of having at least three months' worth of living expenses tucked away in an emergency fund so you're covered when unplanned bills arise. And having a meager entry-level wage is no excuse not to build some savings, so if you don't trust yourself to manage your spending accordingly, arrange for a portion of each paycheck to automatically transfer into your bank account. This will remove the temptation to blow that cash needlessly.

Fighting for a higher wage

Clearly, there are steps you can take to make the most of your income, no matter how low it happens to be. But wouldn't it be equally helpful to give your salary a boost?

Now, you can't just march into the office of your boss and demand a raise, but you can request a sit down and make a strong case for one, provided you prepare in advance. To do so, research some salary data online so you know how your wages stack up. If you can show your manager that you're statistically underpaid given your industry and job title, you might get yourself a respectable bump. At the same time, come in equipped with a list of ways you add value to your company, whether it's by being the person who consistently logs on after hours or by having a unique skill that no one else seems to have.

If that doesn't work, consider busting out your resume and applying to different companies. Switching employers will often do the trick in boosting your salary if your current company isn't willing to budge.

Another option? Give yourself an instant raise by getting a side hustle. Putting in just a few hours a week at a second gig could buy you a lot more financial wiggle room.

Though it's a shame that wages have declined among younger workers over the past four decades, it doesn't mean millennials are overwhelmingly doomed. If you manage your income wisely and fight for higher wages, you can survive the early stages of adulthood with your finances intact.