Because Social Security won't be enough to sustain today's older workers in retirement, it's imperative that they save on their own for their golden years. Yet an alarming number of baby boomers are behind on retirement savings. In fact, 30% of boomers have no money set aside for their golden years, according to the Stanford Center on Longevity. And among those who do have savings, the median balance is just $290,000 for boomers born between 1948 and 1953 and $209,246 for those born between 1954 and 1959.

Given this major savings lag, you'd think more boomers would be taking steps to make up for lost time by ramping up their retirement plan contributions. In reality, only 40% of workers aged 55 to 64 are contributing to an employer-sponsored retirement plan. 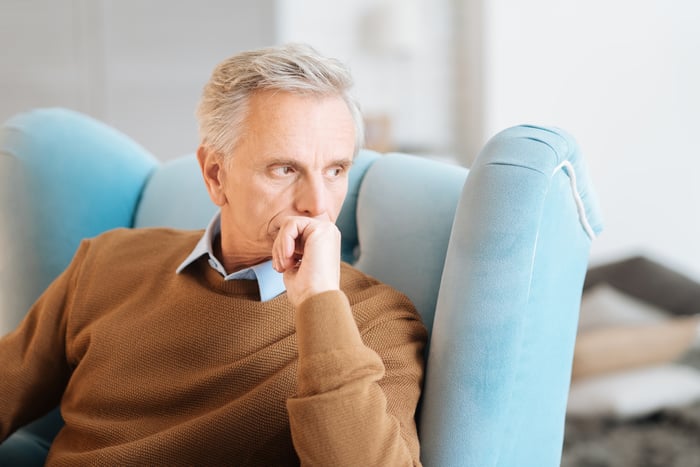 Of course, not all workers have access to a 401(k) through work, but since an estimated 79% of Americans do have the option to save in such a plan, that 40% figure is highly disturbing. If you're an older worker who's behind on retirement savings, it's critical that you spend the remainder of your career playing catch-up. Otherwise, you might really struggle financially when your time in the workforce comes to an end.

Younger workers often put off retirement savings, thinking they have plenty of time to focus on building their nest eggs. Boomers, however, can't easily make that excuse. So why do so many let their savings fall by the wayside? Often, it comes down to misplaced priorities. Many older workers will claim they don't earn enough money to save for retirement or that they have too many expenses to set aside funds for the future. But it's that attitude that causes so many seniors to wind up living on the edge of poverty.

Even if you're not a particularly high earner, there are steps you can take to free up more cash to save for retirement. For one thing, cut a few expenses from your budget, whether that means dining out less frequently or unloading a car. Or consider getting a side job. It doesn't matter what you do to carve out some money for savings as long as you actually make it happen.

Securing your own financial future

Though you can expect your expenses to go down in retirement to a certain degree, as a general rule, you'll need about 80% of your preretirement income to live comfortably during your golden years. Since Social Security will only provide about half that amount (assuming you're an average earner), it's up to you to bridge that glaring gap. Of course, there's always the option to live an extremely frugal lifestyle as a senior. But unless you're willing to cut out all luxuries (think simple ones like cable, your cell phone, and the occasional movie or restaurant meal), you'll need to establish a healthy level of savings.

The good news? As long as you're still working, you have a great opportunity to catch up. Currently, workers over 50 can contribute up to $25,000 a year to a 401(k) and $7,000 a year to an IRA. If you're not in the habit of saving anything, or are currently only setting aside a fraction of what the current annual limits look like, then maxing out a 401(k) or IRA may not be feasible. But that doesn't mean you can't save more than what you're currently saving -- especially if your current annual contribution amounts to $0.

In fact, let's imagine you're 60 years old with no money saved for the future at all. If you start saving $400 a month today and continue doing so for the next 10 years, you'll have a $66,000 nest egg if your invested savings generate an average annual 7% return during that time. Is that a ton of money to retire on? Not exactly. But it's sure better than nothing.

Of course, that figure assumes you're only willing to work until 70. If you're able to plug away and keep saving at the aforementioned level until age 75, you'll end up with more than $120,000 in retirement, all other things being equal. And that leads to another important point: If you're behind on savings at present, consider extending your career. Working longer achieves two essential goals: it lets you add to your nest egg, all the while leaving your existing savings untouched for longer.

Another thing: Working longer can help you boost your Social Security benefits. For each year you delay benefits past your full retirement age (which is either 66, 67, or somewhere in between depending on your year of birth), you'll boost them by 8%. This incentive, however, runs out at age 70, so while it still pays to work past then if you're behind on savings, doing so won't add to your benefits.

There's no question about it: You'll need savings of your own to live comfortably in retirement. And the sooner you recognize that, the sooner you can make changes that shape your golden years for the better.