Please ensure Javascript is enabled for purposes of website accessibility
Log In Help Join The Motley Fool
Free Article Join Over 1 Million Premium Members And Get More In-Depth Stock Guidance and Research
By Maurie Backman - Jan 19, 2019 at 9:18AM

Even if you're not a saver by nature, you can still build a healthy cash reserve.

As a personal finance writer, it's not an easy thing to admit that I'm not the best at saving money. What I mean is that I'm the type of person who easily falls victim to temptation. If I'm in the mood for a fancy coffee, I generally buy it, even when I know that instead of spending $2 or $3, I could brew a cup for pennies at home. If I'm asked to attend an event that sounds fun, I'll generally jump on it, even if I know there are more responsible things to do with $100 or so. And while I'm not the biggest shopper, occasionally, I'll update my wardrobe when something neat catches my eye.

None of these tendencies is particularly abnormal. In fact, Americans in general are pretty bad savers, as evidenced by the fact that 60% don't have enough money in the bank to cover a $1,000 emergency. 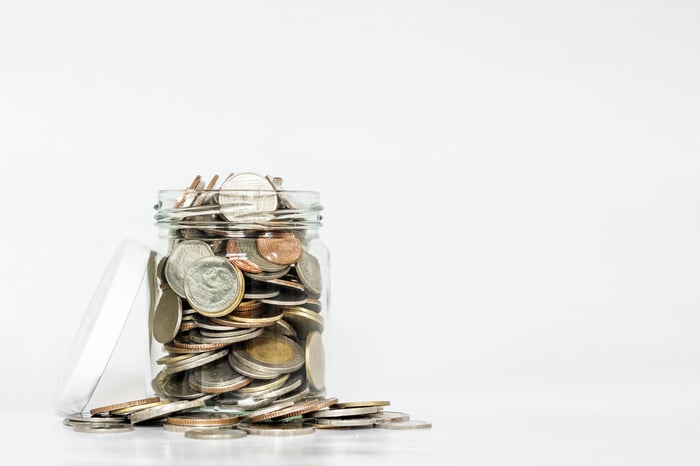 Here's the thing, though: Despite the fact that I'm not a great saver, I do save money. Consistently. In fact, I generally manage to sock away a decent chunk of my income despite the tendencies I described earlier.

My secret? I send my money to savings before I even get a chance to see it. It's a concept known as paying yourself first, and it's what's allowed me to do a reasonable job of saving in the face of life's many, many temptations.

It's hard to save money when spending it is so much easier. That's why I insist on automating my savings -- so that before I get a chance to touch my earnings, a large chunk lands either in the bank or in my retirement plan.

The reason I put money into both types of account is this: We all need money for retirement, so I aim to max out my contributions whenever possible. Currently, I'm housing my long-term savings in a SEP IRA, which is an option available to self-employed individuals like me. The more I contribute, the more savings I stand to retire with, but just as importantly, SEP IRA contributions go in tax free, which means the more I put in, the more I lower my taxes. (Incidentally, all retirement plans other than Roth IRAs and 401(k)s work the same way.)

At the same time, I also make sure to put money into a traditional, unrestricted savings account. From there, I allocate it to different things, including my brokerage account (where I can invest it), my kids' 529 plans, and my emergency fund when it needs replenishing.

Because I'm a freelancer, the amount I earn each month is subject to change. But generally, I manage to put away at least 20% of my earnings. I'm able to pull that off because despite my tendency to give in to temptation, I keep many of my major expenses as low as possible. I own a home, for example, whose mortgage is much less than the amount I qualified for when I applied. I drive a fairly modest car, while my husband still clunks around town in a 12-year-old vehicle we're convinced might give out on us at any second.

Of course, not everyone has the same set of priorities that I do. I'd rather live in a less extravagant home or drive a boring car if it gives me the option to save money and spend freely on different luxuries. Other folks might prefer to have the nicer house but cut back on other expenses instead. And that's all fine. No matter what priorities you have, however, if you want to save money, push that goal to the top of your list. And then automate your savings so that you're starting off by socking away some cash each month and working backward from there -- not the opposite way around.