Hint: It's a lot. And it's hurting us in many ways.

Most of us work hard for our money, and want to enjoy it in different ways. For some, that means paying for vacations and leisure. For others, it means spending a modest fortune on restaurant meals, store-bought coffee, and takeout.

No matter what your favorite luxury entails, chances are, it eats up a large chunk of your earnings. And that's fine if your savings are in a solid place. Most Americans, however, aren't in that boat. An estimated 40% of U.S. adults don't have the money in savings to cover a mere $400 emergency. Meanwhile, 42% aren't setting funds aside for retirement because their income is otherwise maxed out.

The sad part? We're spending so much on non-essentials that we're compromising our financial security in the process. 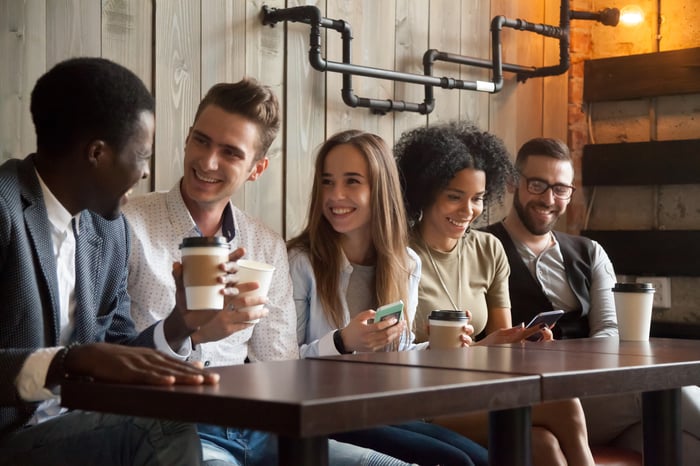 The average American spends an estimated $697 a month on non-essential expenses, according to a new survey by TD Ameritrade. Not shockingly, millennials are the worst offenders in this regard, spending a whopping $838 a month on expenses that are nice but technically needless. Baby boomers, meanwhile, spend an average of $683 a month, while Gen Xers waste the least money at $588 a month.

What do we mean when we talk about non-essentials? In the aforementioned survey, respondents listed the following items as basics in their minds:

Of course, there's nothing wrong with spending some money on luxuries. The problem, however, is that many Americans are willing to let their savings fall by the wayside if it means getting to enjoy whatever non-essentials top their list. In fact, 32% of Americans admit that spending on non-essentials has contributed to higher levels of credit card debt, while 48% acknowledge that it's prevented them from building retirement savings.

If you've been spending a bundle on luxuries and haven't been saving (or, worse yet, have been racking up debt) as a result, it's time to reset your priorities. Otherwise, you'll risk hurting your finances indefinitely.

Let's be clear: It's OK to spend a portion of your income on non-essentials as long as you're saving reasonably and aren't taking on debt in the process. But if that's not the case, you'll need to rethink your habits and start doing better.

For one thing, we're all told to have a minimum of three months' worth of living expenses in the bank for emergencies. If you're currently spending $697 a month on non-essentials like the average American, you could pad your emergency fund with $8,364 in just a year's time.

Furthermore, $697 a month could go a long way toward building your nest egg for retirement. If you were to invest that sum each month over a 30-period, and your investments were to generate an average annual 7% return (which is quite doable when you load up on stocks), you'd end up with $790,000. And that's a good way to buy yourself some financial security during your golden years.

Tempting as it is to spend all of your spare cash on luxuries, you'll need to start allocating some funds for more important purposes if you're not already in the habit of doing so. And if your current spending pattern has landed you in debt, you'll really need to look at cutting back -- not just on luxuries, but perhaps on things like housing and transportation as well. (Yes, you need a roof over your head and a means of getting to work, but you can rent a smaller apartment and take the bus rather than enjoy the convenience of a car.)

You never know when a financial emergency might strike when you least expect it, and without savings, you'll risk racking up costing debt to cover it. Similarly, you absolutely need savings of your own if you want to enjoy a reasonably comfortable lifestyle in retirement. The less you spend on non-essentials, the more money you'll have available for these key purposes, so do yourself a favor and start cutting back -- big time.