Homeownership has long been the American Dream, but for millennials, it's growing increasingly less attainable. And the reason largely boils down to excessive levels of student debt, or so says a new report by Guardian.

An estimated 75% of millennial college graduates are carrying student debt either for themselves or for a spouse or partner. As such, many have had no choice but to delay homeownership until they're in a more secure place financially. (In fact, students who graduate with educational debt are less likely to own a home by age 33 than those who don't take out college loans.) 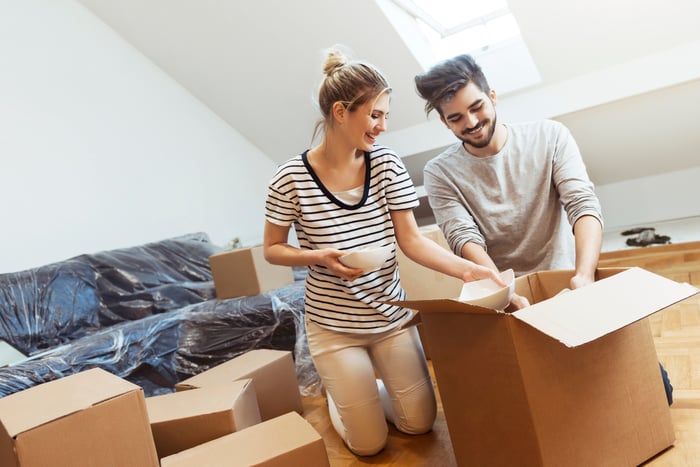 If your student debt is preventing you from buying a home, there are steps you can take to shake it sooner while finding ways to boost your savings in light of those loan payments. Here are a few to start with.

Moving back in with your parents after college is no longer the shameful endeavor it once was. With college costs skyrocketing and loan balances rapidly following suit, it makes sense to move back home as a young adult and save on many of the expenses that would otherwise monopolize your income, like rent and utilities -- living costs you might pay little to no money for by living under your parents' roof.

If you're still not convinced, consider this: The national median cost of rent is $1,445. If you were to live at home for three years after college and pocket that amount instead, you'd have $52,000 to put toward your student loans or save for a home down payment.

Unless you qualify for student loan forgiveness, the principal amount you borrowed for college will need to be paid back in your lifetime. But that doesn't mean you can't lower the interest rate on your loans, thereby reducing your monthly payments in the process.

If you took out private loans for college, which are notorious for charging lots of interest, then it pays to explore your options for refinancing. What you'll be doing is essentially swapping your existing loans for a new one at a more favorable rate, thereby leaving you with money left over to save for the home you're looking to buy. Refinancing is a particularly good option if your credit is great. If it isn't, you're better off improving your credit and then attempting to refinance.

The problem with being a younger worker is that you might be stuck with a relatively entry-level salary. And that, combined with a pile of student loans, might make it tough to set a meaningful amount of money aside for a house.

A good solution, therefore, might come in the form of a side hustle. By taking on a second gig, you'll have a chance to boost your income, and since the money from that work won't be earmarked for existing living expenses, you should have no problem using all of it to pay down your educational debt, save for a down payment, or both.

Is the time right to buy a home?

In an ideal world, student debt wouldn't hold you back from buying a home. But if you're carrying loads of it, you're generally better off paying a chunk of it down before taking on the financial responsibility that comes with owning property. When you buy a home, you suddenly become responsible for a world of expenses that extend well beyond your mortgage payment. There's insurance, property taxes, maintenance, and repairs to contend with, and you'll need to be in a strong financial position before taking those costs on.

That said, if your student loans are manageable and they only eat up a small portion of your income, you don't necessarily need to wait to become college debt free to buy. If you have the money for a 20% down payment and a healthy emergency fund in spite of your loans, you can move forward with buying, all the while continuing to shake that debt until it's gone.