You'll often hear that kids' minds are like sponges -- they just soak everything up. That's why I'm making an effort to teach my first-grader about money. Granted, he's a little young to understand complex concepts like compounding, but he does understand the idea of saving money for important things versus spending it freely. He also knows very well that money doesn't, in fact, grow on trees, but rather, is earned as the result of hard work. Here are a few specific ways I'm conveying these and other important lessons.

1. Giving my son an allowance

My son gets $2 a week, provided he helps out around the house, does his homework without complaining, and generally behaves. Now you might argue that in giving an allowance, I'm teaching him that money is something he's entitled to, but in reality, he's well aware that his weekly $2 is the result of an effort on his part. My son also knows that he's too young to go out and get an actual job, and so for now, this is his only opportunity to earn money of his own. 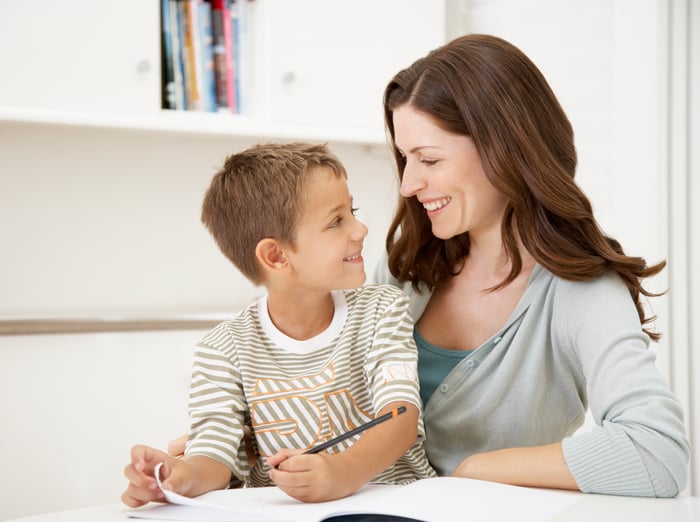 At the same, giving him his weekly $2 means he knows not to ask me for money he has himself. For example, the kids at my son's school have the opportunity to buy snacks at the cafeteria. If my son wants one, he can use his allowance. If he's hesitant to spend his money on something as meaningless as an ice cream bar, he doesn't do it and instead saves that money for something more important. In other words, it's a good exercise in self-control, which is not a bad lesson to impart at a young age.

2. Banking my son's money and having him write checks to take withdrawals against it

I'm not big on stockpiling cash, since there's always the potential to lose it. This especially holds true when you're dealing with a first-grader with a tendency to pile up his dollar bills for sport and then return said money to his piggy bank without making sure a few stray dollars didn't somehow land on the floor, under his bed, or behind his bookshelf.

That's why I take my son's money away at $50 increments. I don't keep it for myself, though; I put it in a bank account so that it's there for him. At the same time, my son has an old checkbook that he can use to take withdrawals from that account. Basically, he writes a check out for the amount he wants and what he wants it for, and I get him the money. I then rip up the check, since it's not linked to an actual account, but this way, he understands how bank accounts work, and that his money is still his, even if he can't physically see or count it.

3. Being stingy with windfalls

Every so often, my son will get a little bonus money on top of his allowance. Usually, it's a little extra cash I give him for being super awesome (such as the time he cleaned his sisters' room to help me out when it clearly wasn't his responsibility), or money for milestones such as losing a tooth.

But if I'm being honest, I'm not particularly generous when it comes to those windfalls. Most of the time, we're talking about an extra dollar, or maybe $5 in the case of a tooth. (In fact, when I heard that the going rate for a lost tooth was somewhere in the ballpark of $10 to $20, I think I gasped in disbelief.) The reason? I don't want my son to expect windfalls and count on them, because in life, you don't always get large handouts. Rather, I prefer to focus on giving my son opportunities to earn extra money so that he values it more. (Besides, he doesn't believe in the tooth fairy anyway.)

You might think I'm crazy to be teaching my first-grader about money at a time when he's only first learning to add and subtract. But in reality, my hope is that by instilling certain lessons when he's young, he'll learn to be responsible with money and appreciate its value. And that makes it more than worth the time I'm putting in.