Are you tying to decide whether to save for retirement in a traditional Individual Retirement Account (IRA) or a Roth IRA? Both are great retirement vehicles, and you can save a total of $6,000 in them -- $7,000 if you're 50 or older -- in 2019, up $500 from last year. But the two accounts differ in tax treatment, income limits, and the potential flexibility they offer once you're retired.

A Roth IRA is the better choice if it looks like you'll be earning more in retirement than you do now. But Roth IRAs are also subject to income limits, while traditional IRAs are not. That's where a conversion from traditional to Roth called a backdoor IRA can ride to the rescue. Let's look at its potential benefits. 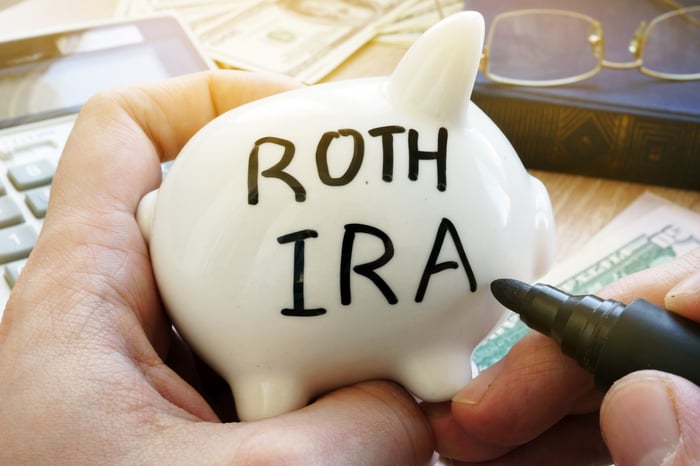 1. A Roth IRA can save on taxes when you're in retirement

One of the biggest differences between a Roth IRA and a traditional one is how the Internal Revenue System (IRS) taxes them.

Contributions you make to a Roth IRA are taxed in the year you contribute them. But the money you save grows tax-free in the account, and qualified withdrawals in retirement are not subject to any tax at all.

If your tax bracket is likely to be higher during retirement, a Roth can save you in taxes because you pay a lower tax rate on the money when you save it in your younger years, and then you enjoy tax-free withdrawals when you take the money out to fund your retirement.

For people planning decades in advance, it's not always possible to determine with certainty if you'll be in a higher tax bracket in retirement, but most people hit their earnings peak in middle age. If you hit an earnings peak, have robust retirement savings, and then take Social Security benefits, you're likely to be in a higher tax bracket than you were in your 20s or 30s, so the tax-free retirement savings in a Roth could look pretty sweet.

2. A conversion lets you contribute to a Roth if you're over the income limit

So why doesn't everyone interested in tax-free retirement income just shovel all their extra money into a Roth? Well, first, the shoveling in any IRA is limited to the $6,000 annual combined limit (and $7,000 if you're 50 or older).

Second, though, the use of Roth IRAs is always subject to income limits, which restrict how much you can save based on your earnings.

If you're a single filer whose income is above $122,000, the amount you're allowed to contribute to a Roth is reduced. If you're married and filing jointly, contributions are reduced if your income rises above $193,000. And, you can't contribute to a Roth IRA at all if you're a single filer earning more than $137,000 or married filing jointly and earning more than $203,000.

Effectively, that means that folks earning above those income limits can't benefit from a Roth IRA as much as people earning below. Certain high-earners can't benefit at all! But there is a workaround, or a legal loophole called a backdoor IRA.

There are three important facts to know about the backdoor IRA process:

3. Roth IRAs do not have required minimum distributions (RMDs)

The third benefit to Roth IRAs is that they allow more flexible management of your money in retirement. If you have a traditional IRA, you must take a required minimum distribution (RMD) so the IRS gets its cut of your tax-deferred money. Traditional IRA holders become eligible to withdraw money without penalty at age 59 1/2, and they are mandated by RMDs to take distributions beginning at 70 1/2. In contrast, a Roth IRA never has RMDs.

You can leave your money in a Roth IRA as long as you want, which has several potential advantages in retirement. First, you can keep a Roth IRA nest egg for any financial shocks in later retirement, such as higher-than-usual health expenses or long-term care. Second, you can use a Roth to plan your estate, leaving tax-free income to your heirs.