These blunders could open the door to an audit and cause you to lose out on money. Talk about a double whammy.

Filing taxes can be a stressful process, and in some cases, a tricky one, too. But if you manage to botch your tax return this year, you could end up on the wrong end of an IRS audit. You might also end up denying yourself money back from the IRS that's rightfully yours. With that in mind, here are a few tax mistakes you'll want to avoid as you tackle your return.

Whenever you make money, whether it's via a salary, a side job, investment gains, or interest in your bank account, the IRS is entitled to a piece of it. Therefore, if you fail to report income, you can bet the IRS will come knocking for it. 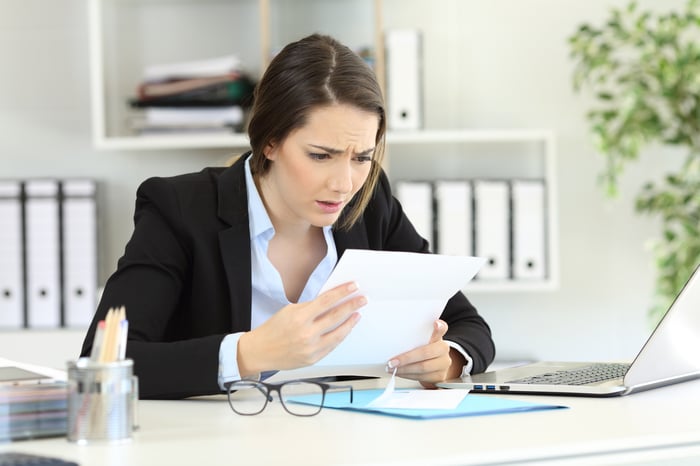 Any time you make $600 or more as a contract or independent employee, you'll receive a 1099 form summarizing that income. You'll get similar forms that document your earnings on investments and interest received. Be sure to report all of the income those 1099s list, because for each form you receive, the IRS also gets a copy. And if the agency's records don't match what you're reporting, you're basically asking for trouble.

You're also required to report income that isn't documented on a 1099. For example, if you're paid $300 in cash for a freelance project, you're technically required to tell the IRS you earned that money.

There's a host of tax deductions out there that could prove quite valuable to you depending on what you're eligible for. But if you're going to claim deductions, make sure you have actual records to support the numbers you list on your tax return. Guessing at deductions is a good way to get the IRS a bit suspicious, especially if those deductions seem disproportionately high for your income or too perfect to be real.

For example, if you're a freelance photographer who earned $80,000 last year, and you're claiming $35,000 in equipment, you'd better have receipts showing that you did indeed spend that much on valid business expenses. The IRS might still question how you managed to spend around 44% of your income on gear, but if you have the records to prove it, you'll probably come out unscathed, especially since it's feasible that you made a one-time investment in your business.

Along these lines, if you're claiming a $1,000 mileage deduction on your vehicle in the absence of an actual log documenting your work-related trips, the IRS might take notice. After all, it's almost too convenient that your total costs magically added up to such a round number.

In previous years, the majority of tax filers took the standard deduction instead of itemizing on their tax returns, and this year, an even greater number of filers are likely to go that route. The reason? The standard deduction nearly doubled for the 2018 tax year, which means filers need almost twice the amount of eligible expenses to make itemizing worthwhile.

That said, just because a lot of filers will stop itemizing this year doesn't mean you should do the same. If you have a large number of deductions -- say, you gave a lot to charity, paid a lot of mortgage interest, and can write off the maximum allowable $10,000 in state and local taxes -- then you might come out ahead financially by itemizing, even if it is more of a headache.

Ultimately, the decision to itemize should boil down to math, so figure out what your standard deduction is (for the 2018 tax year, it's $12,000 for single tax filers and $24,000 for married couples filing jointly), add up your itemized deductions, and see which number is greater. And then file accordingly.

4. Waiting until the last minute to file

Filing a tax return can be a complicated process, especially if you're self-employed or are itemizing. As such, waiting until the last minute might force you to rush through the process, and once that happens, your chances of making a mistake or missing a key credit or deduction increase. A better bet? Carve out time well ahead of the April 15 tax filing deadline to complete your return. This way, if you have questions along the way, you'll have time to consult with a tax professional to avoid falling victim to errors.

If you do wait until April to get moving on your tax return and start running into a time crunch, be sure to get yourself a tax extension. This won't get you out of paying your tax bill by the April 15 deadline if you end up owing the IRS money, but it will help you avoid the costly failure-to-file penalty that applies when you owe money and don't submit a return by the filing deadline.

The last thing you want to do is make a mistake on your tax return and suffer for it after the fact. Avoid these errors, and you'll be a happier camper as this year's tax season comes to a close.