Please ensure Javascript is enabled for purposes of website accessibility
Free Article Join Over 1 Million Premium Members And Get More In-Depth Stock Guidance and Research
By Maurie Backman - Apr 7, 2019 at 9:36AM

And it's putting their futures at risk.

Being self-employed isn't easy. Not only must you grapple with a fluctuating income, but you're also liable for self-employment taxes that can constitute a major financial burden throughout the year. As such, it's easy for independent workers to let their retirement savings fall by the wayside. Doing so, however, is a major mistake, as it'll put you at risk of being cash strapped in retirement.

Unfortunately, an estimated 44% of independent workers aren't actively saving for retirement, according to a recent report by T. Rowe Price. The reason? Part of it might boil down to a lack of a steady income, but retirement plan accessibility might also come into play. In fact, it's estimated that just 28% of traditional employees aren't saving for retirement, which could partly stem from the fact that 401(k) plans lend to easy participation. 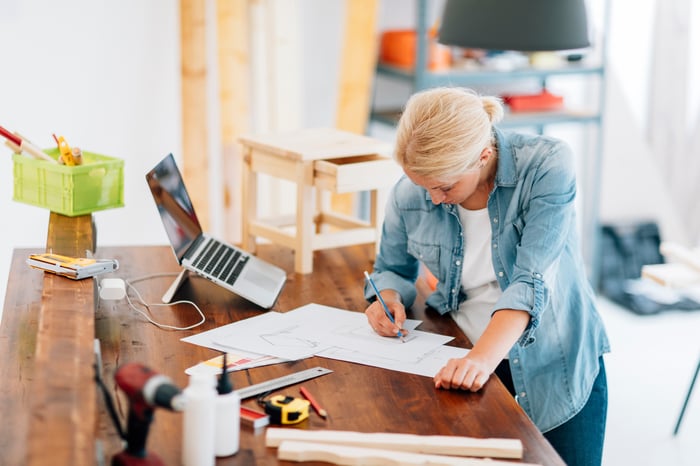 If you're an independent worker who's been falling down on the retirement savings front, you should know that you have several plans at your disposal that can help you build a substantial nest egg. Here are a few you should know about.

An IRA, or individual retirement account, is something anyone with earned income can contribute to. This year, you can put in up to $6,000 if you're under 50 or $7,000 if you're 50 or older. That money also goes in tax free, which means the IRS can't tax you on the amount of income you allocate to your account. From there, your money gets to grow on a tax-deferred basis until you're ready to take withdrawals in retirement (which are then taxable at that point).

Roth IRAs have the same annual contribution limits as traditional IRAs, only they have the opposite tax treatment. Contributions are made on an after-tax basis, so there's no immediate benefit to funding an account. Withdrawals, however, are taken tax free in retirement. Another thing you should know about Roth IRAs is that higher earners (single tax filers earning above $137,000 and joint filers earning above $203,000) can't contribute to a Roth IRA directly. If that's your situation, you can always fund a traditional IRA and convert it to a Roth after the fact.

Short for simplified employee pension, a SEP IRA is an IRA designed for independent workers and small-business owners. Its primary benefit is that it offers higher contribution limits than a traditional or Roth IRA. For the current year, you can contribute up to 25% of your net business earnings for a maximum of $56,000. Like traditional IRA contributions, that money goes in tax free, but withdrawals are eventually taxed in retirement.

Short for savings incentive match plan for employees, the SIMPLE IRA is another IRA designated for self-employed individuals, and its contribution limits are higher than those of a traditional or Roth IRA. For the current year, you can contribute up to $13,000 to a SIMPLE IRA if you're under 50 or $16,000 if you're 50 or older. Those contributions go in tax free, which means there's immediate savings involved, but withdrawals are taxed down the line.

You don't need to work for someone else to gain access to a 401(k). All you need to do is open a Solo 401(k), and you'll enjoy the same benefits as a traditional 401(k) with one important difference: the potential to contribute even more money to your account. For 2019, you can contribute up to 25% of your net self-employment income for a maximum of $56,000 if you're under 50 or $62,000 if you're 50 or older. That money gets to go in tax free, and withdrawals are taxed in retirement.

You might think that being self-employed would put you at a disadvantage on the retirement savings front, but actually, independent workers have more choices when it comes to building a nest egg. If you've been neglecting your savings thus far, it's time to refocus and shift your priorities. Without a substantial amount of savings, you risk struggling financially down the line, and after so many years of hard work, frankly, you deserve better.