Buying a home is a major undertaking. Not only does it involve socking away a down payment, but, in many cases, bearing the cost of moving and furnishing a new space as well.

Still, that's just the tip of the iceberg. When you buy a place of your own, there's also the ongoing expense of maintenance to worry about. And make no mistake about it -- that expense can be substantial, especially when major repairs creep up.

If you're not careful, substantial repairs can really throw your finances for a loop. But, unfortunately, new data from home services site Porch reveals that homeowners are largely unprepared to tackle a significant repair job. That's because homeowners only have a median $3,000 saved for unplanned home-related issues, but major problems like a sinking foundation, busted septic tank, or failing roof could easily demand several times that amount of money. 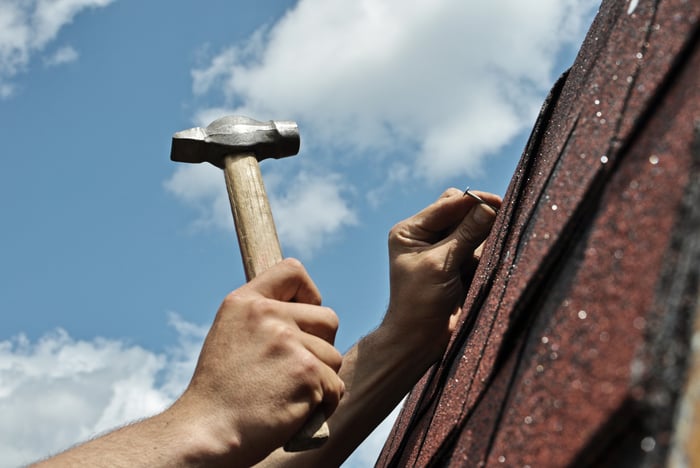 Furthermore, 32% of homeowners have just $1,000 or less saved for a home repair emergency, while only 35% have enough money in the bank to cover a $10,000 job if the need for one were to arise. If you're a homeowner in a similar boat, it's imperative that you take steps to build some savings immediately. Otherwise, you may have no choice but to rack up some serious debt the next time something with your home goes wrong.

We're all supposed to have enough money in the bank to pay for three to six months of essential living expenses, otherwise known as an emergency fund. That amount of savings could, conceivably, suffice in covering a major home repair expense.

What happens if you don't have that money on hand? It's simple -- you'll likely be forced to resort to some type of debt to pay for your next big repair. And that, in turn, could end up not only costing you more money but potentially damaging your credit in the process.

A better bet, therefore, is to work on building emergency savings, and you can start by examining your budget and choosing some expenses to cut. That could mean giving up a car if you can live without it, canceling cable, or cooking at home instead of paying a premium to dine out at restaurants. At the same time, it pays to look into getting a second job on top of your regular one if your savings aren't in robust shape. The great thing about that extra income is that it won't already be earmarked for existing expenses, which means you should have no problem saving all of it.

Keep in mind that it might take some time to build a true emergency fund, so if you happen to encounter a big home repair in the interim, explore your options for financing it affordably. That could mean taking out a home equity loan or tapping a home equity line of credit rather than whipping out a credit card. Remember, the last thing you want to do is put off a major repair because you don't have the cash for it and make the problem exponentially worse -- and more expensive.