And they're doing them a disservice in the process.

It's no secret that healthy financial habits tend to start early in life. It's therefore important for parents to impart key financial lessons to their kids while they're relatively young and impressionable. But while many parents talk openly to their children about money matters, there's one topic that tends to fall by the wayside: debt.

According to online lender SoFi, only 8% of parents feel that student and credit card debt are financial topics they ought to prioritize. But disturbing nationwide trends tell the opposite story. U.S. credit card debt has surpassed the $1 trillion mark, while Americans now owe more than $1.5 trillion in student loans. And that means that parents are doing their kids a disservice by not warning them about the dangers of too much debt. 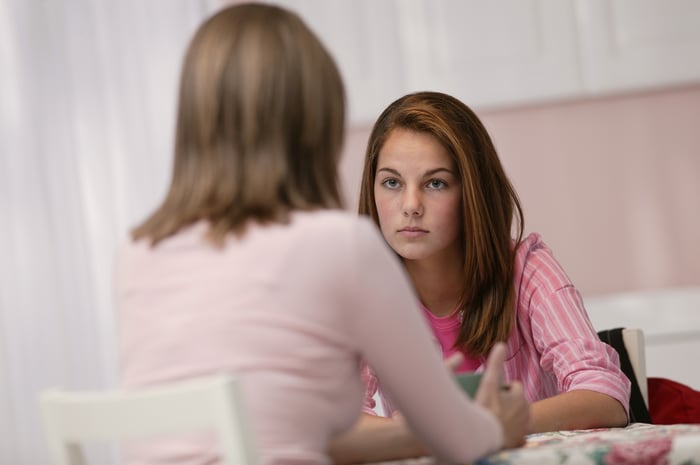 Excessive debt has its repercussions

There are several problems with taking on too much debt. First, racking up excessive debt makes borrowers less able to keep up with their payments. And falling behind on those payments can damage a credit score to the point where it's beyond easy repair.

Racking up too much debt can also cause borrowers to delay important life milestones, whether it's getting married, buying a home, or having children. And let's not forget retirement -- saving for it from an early age is crucial to building a solid nest egg, but when borrowers have much of their income monopolized by debt payments, finding money for an individual retirement account or 401(k) can prove quite challenging.

If you don't arrange a sit-down and review these repercussions, your kids might easily get in over their heads, and suffer for it later in life.

It's tempting to borrow large amounts of money for college, given what it costs today. But if you don't warn your children to keep their associated debt in check, they'll be sorry for it after the fact. To this end, encourage your kids to attend a lower-cost school. Opting for a public in-state college over a private one, for example, could shave $100,000 off the cost of a bachelor's degree, thereby lessening the need for heavy debt. Along these lines, it pays to tell your kids to stick to federal loans when financing their educations. Those come with more borrower protections than private student loans, and they're a safer choice on the whole.

Furthermore, if you're not planning to repay any of your kids' student loans for them, make that clear from the start. The last thing you want is for your children to take on more debt than they can afford because they assume you'll help them cover it after graduation.

As far as credit card debt goes, the rules are simple: Only charge what you can afford to pay off by the time your bills come due. That way, you'll never rack up excess interest, costing yourself more money in the process. Along these lines, encourage your kids to always have some money in the bank for emergencies, so they're not forced to charge unplanned expenses on a credit card.

Warning your children of the dangers of debt is one of the best things you can do to help them become successful adults. If you've yet to broach the topic of debt, make it a priority -- before your kids make a mistake they'll regret.